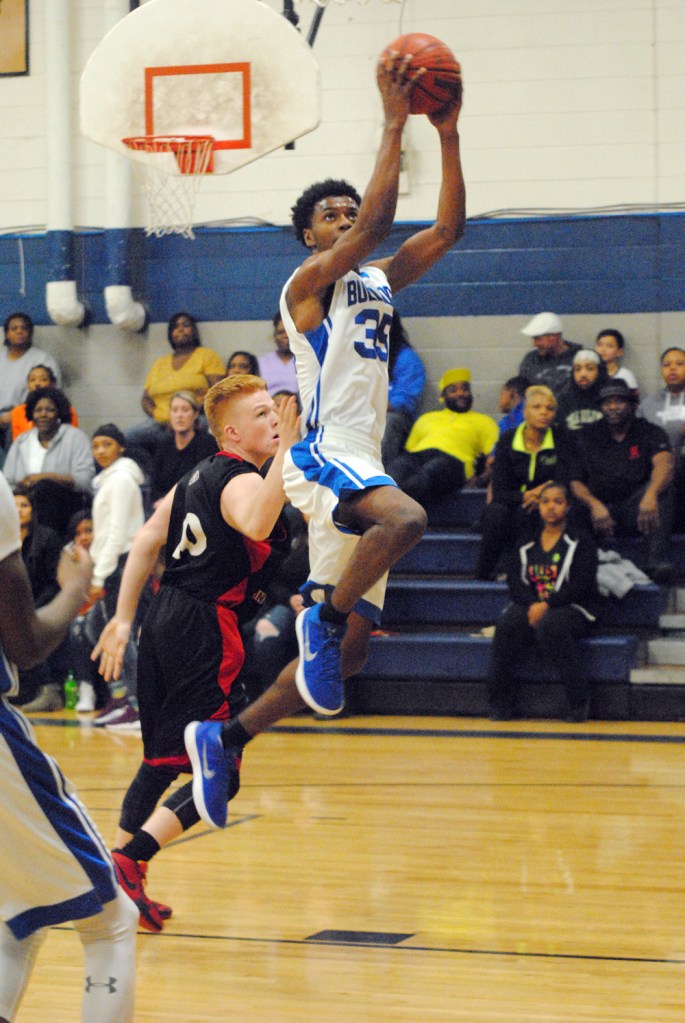 Adafe Price glides to the basket for two of his game-high 32 points in the Albemarle Bulldogs' home win Tuesday over West Montgomery in the first round of the Yadkin Valley Conference tournament.

Midway through Tuesday’s first-round home Yadkin Valley Conference tournament game for the Albemarle Bulldogs, the hosts found themselves ahead yet struggling to find offense. Getting a big boost from the bench, the No. 3 Bulldogs responded in the second half with 54 points en route to a 32-point win over the sixth-seeded West Montgomery Warriors, 89-57. Adafe Price had his second-best individual point performance of the season, leading Albemarle (19-6) with 32 points, including 20 in the second half. Price was one of four Bulldogs in double figures, including Noble Washington adding to his career total over the 1,000 mark with 12 points. King Medley scored 11 for the Bulldogs while Elijah McCall came off the bench and scored 11. Trey Smith was the top scorer for West Montgomery (5-18) with 15 and Makel Horne added 11 for the Warriors. West Montgomery knocked down more 3-point shots, but Albemarle shot higher percentages overall and at the free-throw line. For the game, the Bulldogs were 38-of-69 overall (55.1 percent) including shooting 50 percent or better for three out of four quarters. Albemarle was 3-of-12 from the 3-point arc and 10-of-15 at the foul line. The Warriors were 19-of-63 overall (30.2 percent), which included 7-of-27 from long distance (25.9 percent). West Montgomery was also 12-of-19 at the foul line. Albemarle’s best shooting period of the game came in the first quarter as the Bulldogs were 12-of-20 in the period. The hosts jumped out to a fast 9-0 lead over the first 2:21, getting buckets from Washington, Medley and Price. After West Montgomery got on the board with a Terrell Baldwin 3-pointer, Albemarle pushed the lead to double digits with a 9-2 run, capped with a Medley 3-point play with 3:57 on the clock. Leading 18-8, Price exploded for six points in 19 seconds, including a thunderous dunk to further add to Albemarle’s advantage. The Bulldogs ended the period with a Washington bucket to lead by 18 after one quarter, 28-10. Albemarle’s offensive fates turned sharply in the second period as the Bulldogs turned the ball over eight times, shot just 3-of-9 in the period and just 1-of-5 at the foul line. Albemarle led 35-18 at halftime, but offensively got off to a slow start in the third quarter. Leading by 22 points with 4:09 left in the third, Bulldogs head coach Marc Raye pulled his starters off the floor and went deep into the bench. “My thing is, in the South Stanly game, we had close to 40 points in the second quarter,” Raye said. “They were playing too slow and complacent…as a coach I’m looking towards the future. If we’re slowing the ball down, we’re not paying our game.” The bench players for the Bulldogs played hard and gave the team energy, Raye added. “Once I got their attention, they were willing to say, ‘Let’s get our mojo back,’ ” Raye said about the starters’ reaction to being taken out of the game. The strategy paid off as Price re-entered the game with just over two minutes left in the third and Albemarle up 51-35. Price scored six points in a row as the Bulldogs led 59-40 after three quarters. Albemarle continued to push the tempo in the fourth, hitting 13-of-24 shots and outscoring the Warriors 30-17 for the game’s final margin. Raye likened Price and Washington to the stars of a Hollywood movie as “leaders for the supporting cast.” “You can’t have a great movie without having a supporting cast,” he said. The Bulldogs will take on No. 2 North Rowan at 8:30 p.m. Thursday at Pfeiffer University. The Cavaliers won at home easily over No. 7 South Davidson Tuesday night 96-51. “It’s going to be an eight-minute, four-round heavyweight bout,” Raye said. “Our two teams are very similar in stats and playing style.” To submit story ideas, call Charles Curcio at (704) 982-2121, ext. 26, email charles@stanlynewspress.com or contact him via Twitter (@charles_curcio).