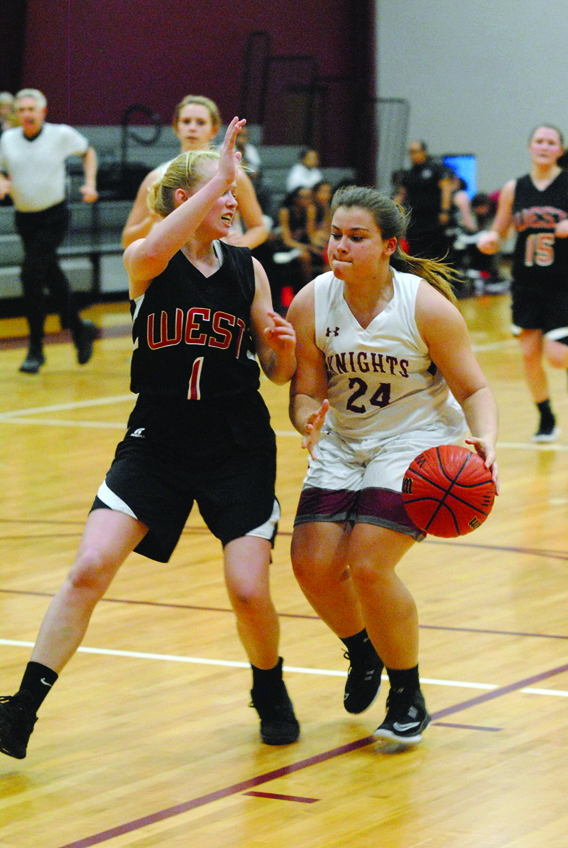 The Gray Stone women’s basketball team’s efforts on defense, one of the team’s stalwarts over the past several seasons, turned in another solid performance on Monday night. In a 39-point win at home in the opening round of the Yadkin Valley Conference tournament, the top-seeded Knights forced 24 turnovers in a 57-18 win over the eighth-seeded West Montgomery Warriors. Danielle Werts led Gray Stone (20-4) with 14 points. Eleven Knights put points up on the board. Malaysha Drake was top scorer for West Montgomery (3-20) with 11. The Knights reached 20 wins with Monday’s victory, the fourth straight season of reaching the mark. Defensively, Monday’s margin of victory for Gray Stone was the fifth most of the season as the Knights kept an opponent under 20 points for the fifth time this season. Gray Stone limited West Montgomery to 7-of-41 shooting in the game (13.7 percent) including 1-of-7 from the 3-point arc. At the foul line, the Warriors were 3-of-14. On the offensive side, the Knights were 24-of-62 overall (38.7 percent) including 2-fo-11 on 3-pointers. Gray Stone shot better at the free throw line than West Montgomery, knocking down 7-of-15 in the game. Leading 4-2 with 3:52 left in the opening quarter, Gray Stone went on a 9-0 run, ended with a Werts 3-pointer with 3.9 seconds left, putting the Knights up 13-2 after one quarter. After limiting West Montgomery to 1-of-7 shooting in the first, Gray Stone topped those numbers, limiting the Warriors to 1-of-12 in the second period. Danika Ray answered an early Warriors bucket with back-to-back baskets to lead 17-4 with 5:33 left in the half. West Montgomery added two free throws over the final 4:46 of the half as the Knights outscored West by nine in the period to lead 26-6 at halftime. Drake scored all of the Warriors points in the third as the Knights continued to build on the lead. Gray Stone led 34-8 with 52.9 seconds left on an Olivia Payne 3-pointer before back-to-back buckets by Drake cut the Knigths lead to 22 after three quarters, 34-12. Gray Stone’s strongest shooting quarter of the night came in the fourth as the hosts hit 9-of-17 from the field, outscoring the Warriors by 17 points in the final period. “The forwards got the ball in the middle of the (West Montgomery) zone and we were able to make good decisions,” Gray Stone head coach Robert Stack said. “We crashed the boards well, got those rebounds and put them back up.” Defensively, Stack said the Knights played good help defense and got into passing lanes to set the tempo. The Knights will play at 4 p.m. Thursday in the semifinals of the YVC tournament at Pfeiffer University’s Merner Gym against North Moore. The third seed Mustangs eliminated No. 6-seeded North Stanly on Monday night, 58-42. To submit story ideas, call Charles Curcio at (704) 982-2121, ext. 26, email charles@stanlynewspress.com or contact him via Twitter (@charles_curcio).