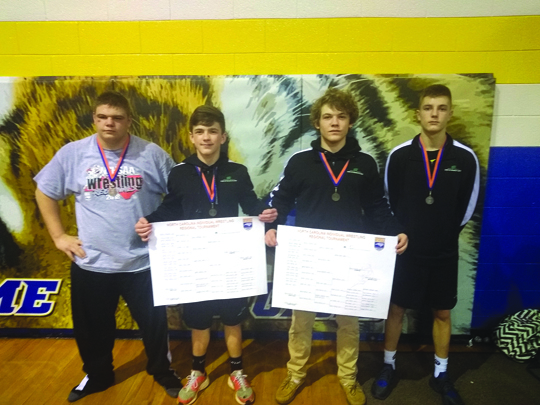 Last weekend, members of the West Stanly wrestling team made the short trek to Mount Pleasant High School to compete in the 2A Midwest Regional. At the event, four Colts qualified for the state finals, with two earning regional championships. At 113 pounds, Aidan Hiott posted four straight victories for the Colts en route to the regional championship. He won by pinfall in 1:20 over West Iredell’s Bradley Hooper, then pinned Isaiah Myers of North Wilkes with 38 seconds left in the quarterfinals. In the semis, Hiott faced CATA’s Grant Haney and advanced to the regional first-place match with a pinfall in 5:31. Hiott’s final match went the distance as Hiott won by a 7-5 decision over Bunker Hill wrestler Parker Howell to earn a spot in the 2A finals as well as winning a regional title. The other regional winner for West Stanly was Jared Watson at 152 pounds. Watson opened the first round with a 46-second pinfall over North Wilkes’ Issac Powell, then won in the quarterfinals by pinfall over Nkosi Barnes of Lexington in 4:33. Watson then posted a 5-1 decision over West Stokes’ Noah Hall to reach the championship match and ended up facing a Rocky River Conference opponent in Austin Reece. Watson shut out Reece 4-0 to win the regional title and move on to the state competition. Korbin McNeill will also wrestle for West Stanly in the finals this week in Greensboro after finishing as the regional runner-up. McNeill won 11-4 in the first round over Mount Pleasant’s Kyle Carlton, then got a pinfall over Central Academy’s Preston Scarborough in the quarterfinals. McNeill then posted a 12-5 decision over Andrew Holden of North Lincoln in the semifinals before falling in the first-place match to West Iredell’s Landon Shuford in 1:48. Jessie Furr will wrestle for West Stanly in the heavyweight class in the state finals after taking third at regional. Furr opened with a 1:13 pinfall over Surry Central’s David Laura, then advanced through the quarterfinals with a 2-1 decision over Anthony Fox of South Rowan. After losing to RRC opponent Dustin Barnhardt of Mount Pleasant by a 6-1 decision in the semis, Furr bounced back in the consolation semifinals to earn a spot in the state with a 5-0 decision over Jarred Tickle of North Surry. In the third-place match, Furr won 4-2 over North Lincoln’s Aaron Wyatt Painter. At the state finals, the weigh-ins for the 2A start at 6:30 tonight, with first-round matchups scheduled to start at 8 p.m. Matches will take place tonight through Saturday at the Greensboro Coliseum Complex. To submit story ideas, call Charles Curcio at (704) 982-2121, ext. 26, email charles@stanlynewspress.com or contact him via Twitter (@charles_curcio).