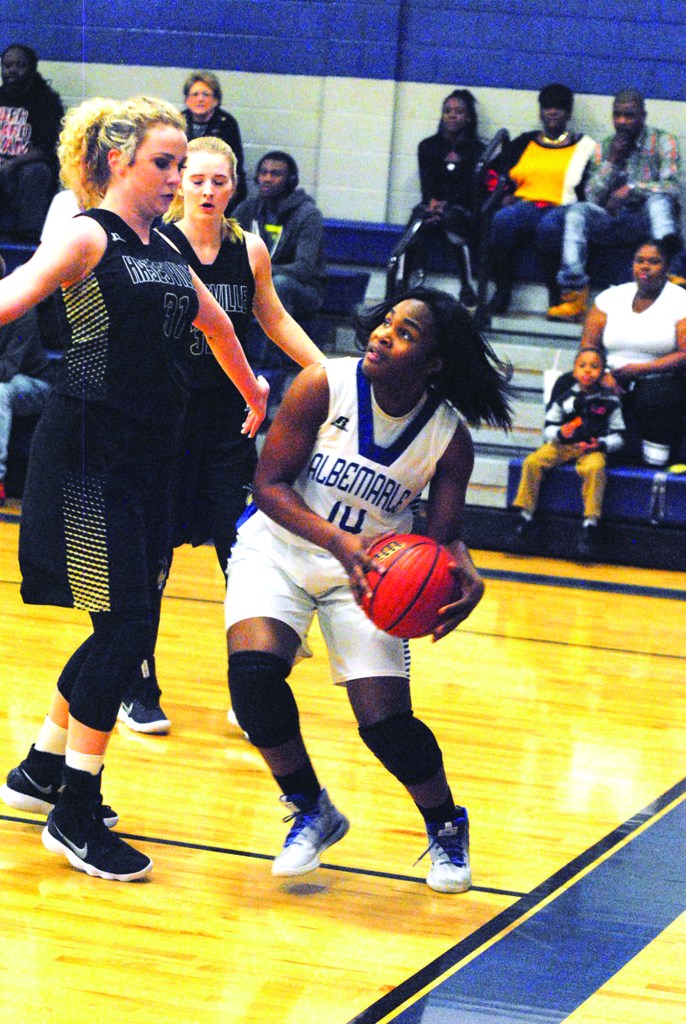 By Charles Curcio
Sports Editor
In 27 basketball games this season, the Albemarle women’s basketball team had scored 30 points or less only twice heading into the team’s home matchup with the No. 20 Hayesville Yellow Jackets.
No. 13 Albemarle struggled to hit shots from the field and was eliminated from the playoffs Tuesday, scoring a season-low in a 12-point loss to the Jackets.
Armani Baldwin led the Bulldogs (21-7) with nine points and Krystin McLendon added six.
Hailea Rickett paced the Jackets (16-11) with 11.
As a team, Albemarle was 8-of-46 from the field (17.4 percent), including 2-of-21 from the 3-point arc. The Bulldogs also were 3-of-8 at the foul line. Albemarle committed 13 turnovers in the contest.
Hayesville shot slightly better from the floor, hitting 10-of-41 shots (24.4 percent) including 2-of-14 on 3-pointers. Where the Jackets did a lot of damage to the hosts was at the free throw line, where Hayesville was 11-of-18. The Jackets turned the ball over 14 times in the game.
Of the 55 points scored in the game, just under half of the points were scored in the opening period. The Jackets scored first in the period, but Albemarle answered with six in a row, including a McLendon 3-pointer and a basket from Zycoria Tillman, which put Albemarle up 6-2.
McLendon later gave the Bulldogs the team’s biggest lead of the game with a 3-pointer with 2:31 left in the first quarter, putting Albemarle up 11-5.
Hayesville answered with a 7-0 run, including 3-pointers from Savanna Annis and Jade Patterson, to retake the lead, 12-11. Baldwin hit a free throw with 1:08 left in the quarter to tie the game.
A long scoreless streak for the Bulldogs started the second period. Including the final 68 seconds of the first, Albemarle went 7:13 without scoring.
The Jackets had just five points over the same stretch of time and led 17-12 before Baldwin scored a basket and knocked down a free throw.
Two Rickett free throws with 39.8 seconds left in the first half gave the Jackets a four-point halftime lead, 19-15.
The Jackets scored just four points in the third period, but limited Albemarle to 1-of-12 shooting and two points, leading 23-17 at the end of the period.
Rickett opened the scoring in the fourth quarter with an old-fashioned 3-point play, then hit back-to-back baskets to put the Jackets up 30-17 with five minutes left in the game.
Baldwin hit two baskets in the final 2:40 of the game but could not get Albemarle closer than 10 points over the final stages of the contest.
“It was a long night offensively. I wish our shots would have fallen and we could have gotten a win and went on to the next round,” Albemarle head coach Eric Davis said.
Hayesville advanced to the second round and will play at No. 5 East Wilkes tonight.
The Bulldogs finished with the team’s fourth winning season in five years for head coach Davis with a record of 88-34 overall (72.1 percent). Albemarle’s 21 wins was the most since the Bulldogs went 23-4 in 2013-14.
“I’m very proud of this group and all they have accomplished this year. They are my kids and I’m proud of them. I have one of the best coaching staffs and a great group to look forward to next year,” Davis said.
Albemarle does not graduate any seniors from this year’s squad.