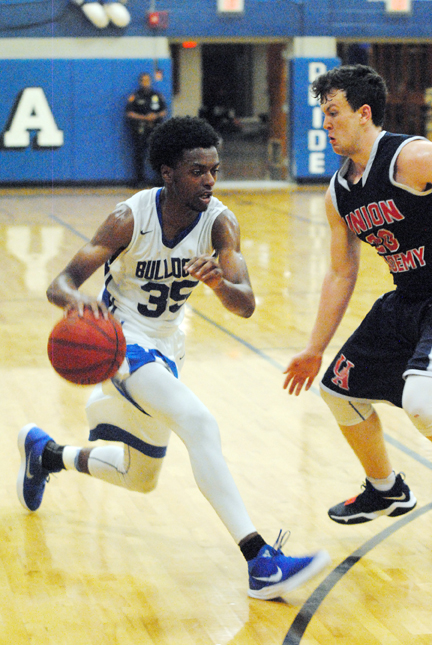 Albemarle senior Adafe Price drives on a Union Academy defender in the second half of the Bulldogs' first-round playoff matchup with the Cardinals.

By Charles Curcio
Sports Editor
The Albemarle men’s basketball team had two main offensive threats this season in seniors Adafe Price and Noble Washington, presenting a formidable one-two offensive punch for an Albemarle team which led the county in points scored per game (69.8 ppg).
In Tuesday’s opening round home game in the NCHSAA 1A playoffs, No. 15 Albemarle lost Washington to a disqualification late in the first half and struggled to fill the void left by him in the second half, losing to the No. 18-seeded Union Academy Cardinals by eight, 67-59.
Price led the Bulldogs (19-7) with 27 points, finishing with 1,533 points in his high school career at Albemarle and West Stanly.
Washington added 16 first-half points for the Bulldogs but was called for a flagrant foul late in the first half and was disqualified for the remainder of the game. He finished his career with 1,109 points scored.
Jalen Anderson led four in double figures for the Cardinals (18-9) with 20 points.
Union Academy outshot Albemarle both overall and at the free-throw line. The Cardinals were 27-of-49 overall (55.1 percent) mostly from two-point range as the Cards were 1-of-9 on 3-pointers, and 12-of-13 at the foul line.
Albemarle shot better from the 3-point arc (3-of-9) but finished 23-of-60 overall (38.3 percent) and 10-of-16 on free throws.
Trailing 5-2 early, an 8-0 Albemarle run including six points from Washington forced a timeout from the Cardinals. Union Academy answered with six in a row and the two teams went back and forth the rest of the period, with the Bulldogs leading by a point, 14-13.
Over the first 3:36 of the second quarter, Albemarle outscored Union Academy 10-5; Price’s bucket with 5:22 on the clock put the Bulldogs up 24-18.
Again the Cardinals responded to tie the game with six in a row, with two free throws from Young Jr. at the 4:38 mark tying the game at 24.
Albemarle then exploded for a 10-0 run over the next 97 seconds, including threes from Price and Cameron Williams, to put the Bulldogs up 34-24 with 3:01.
The game changed temperature in the final 30 seconds of the first half. Washington scored a bucket at the rim, then came down in traffic and made contact with a swinging motion with the nose of a Union Academy player. He was whistled for a flagrant foul and disqualified for the rest of the game.
After two quarters of shooting around 41 percent, Albemarle struggled to find offense in the third quarter, hitting just 3-of-13 in the period (23.1 percent).
The Cardinals slowly crept closer to overtaking the hosts in the third period. A 3-point play from Young Jr. with 2:39 left in the period got Union Academy within one point, 40-39.
Albemarle got back up by four on a Price free throw and a basket from Antonio Burns, but the Cardinals scored the final six points of the third and led by two after the period, 45-43.
“I had to search for someone to come off the bench and give us a spark,” Albemarle head coach Marc Raye said about trying to fill the void left by Washington’s absence.
“A lot of my varsity guys that come off the bench weren’t ready,” he said. “I pulled up a sophomore, Antonio Burns, who came off the bench and gave us that spark.”
Price knocked down a three early in the fourth quarter, which was the Bulldogs’ final lead in the game. Back-to-back baskets from Jalen Anderson put the Cardinals up for good with 6:19 left.
Four times midway through the final period Albemarle stayed within one possession of the Cardinals, the final of which came with around two minutes left in the game. Trailing by five, baskets from Price and King Medley made it a one-point game, 60-59, with 1:26 left.
Jalen Anderson responded with a basket, then after a missed Albemarle free throw, Young Jr. made it a two-possession game with a basket.
Johnny Anderson ended the Bulldogs’ season with a 3-point play with .3 showing on the clock for the game’s final score.
“Guys that know the system weren’t ready…you have to be mentally locked in, dedicated,” Raye said about his team. “I’m always committed to coaching, to trying to win every time. If the coaches’ comittment is higher than the players, it’s going to be hard to win any game no matter what talent you play against.”
Union Academy wanted the win more and played like that, Raye said.
“You only get the one shot at the playoffs, and that shot is do or die.”
Raye added he loved his players and “we were a talented team, but not 100 percent committed to each other.”
“My job is to continue to teach, to love,” Raye said. “(Coaching) is my passion; I won’t let anyone not be committed. I hate it ended this way…I hate losing games I know we should win.”
The Bulldogs graduate six seniors from this year’s team: Price, Washington, Medley, Logan McDonald, David Swaringen and Brian Davis.