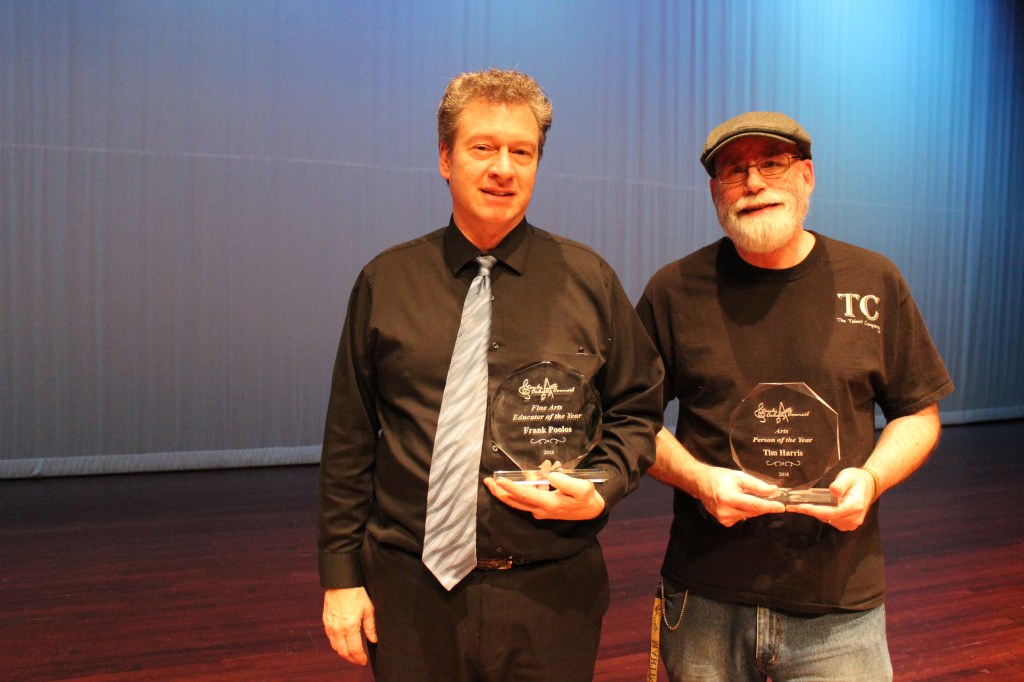 By Shannon Beamon
Staff Writer
This year’s Stanly County Arts Council’s award winners both have the same problem. They just can’t keep the music to themselves.
Whether it’s teaching someone to play an instrument or hooking up sound equipment so people have something to tap their feet to, both Tim Harris and Frank Poolos can’t help but pass along songs and melodies in some form or another.
“It’s about making people a part of it,” Harris said
Named the Arts Person of the Year at the Celebration of the Arts event on Saturday, Harris is perhaps best known for his shop, Music on Main. But beyond the music lessons and advice he gives there, Harris works as the “wizard behind the curtain” for performances across the county, including those by the Stanly County Concert Association, the Talent Company and the Uwharrie Players.
Not that he keeps that side of the business to himself, either.
Wherever he’s setting up speakers or testing microphones, Harris almost always takes students with him, to show them how to do it for themselves.
“If I can, I let them do all the tech,” Harris said. “I want it to be theirs.”
Frank Poolos, the recipient of this year’s Arts Educator of the Year award, said he feels much the same way about his work.
“You can always see it in someone’s eyes when they get it, when it clicks,” Poolos said. “That’s what I love.”
For Poolos, the band director for North Stanly High and North Stanly Middle schools, that means connecting students to an instrument or style of music that fits them best.
But he doesn’t stop with the kids.
“He always encourages everyone to be involved in music,” wife Beth Poolos wrote of him.
Through a wide variety of adult musical groups and events — from the Stanly County Concert Band to the Uwharrie Sound, to his own church — he’s always urging adults in the community to get involved in music.
“It doesn’t matter if they’re younger or older, do something,” Poolos said.
Both men said they caught that enthusiasm for sharing music as kids themselves.
In fact, both men had the same band director, Peter Brouillette, at North Stanly High School.
“I guess Mr. B lit a real fire in us,” Harris said.
One of Harris’ first experiences working with sound equipment came in high school.
“He just gave me the keys to the sound system and told me to get to work,” Harris said.
Poolos said his father had a big influence on him as well. A musician and teacher himself, he grew up watching his dad share the gift of music with others.
“I wanted to do what he did,” Poolos said.
And as their own students clapped from the audience — or ran the sound board in the back — it looked like that gift was still giving.