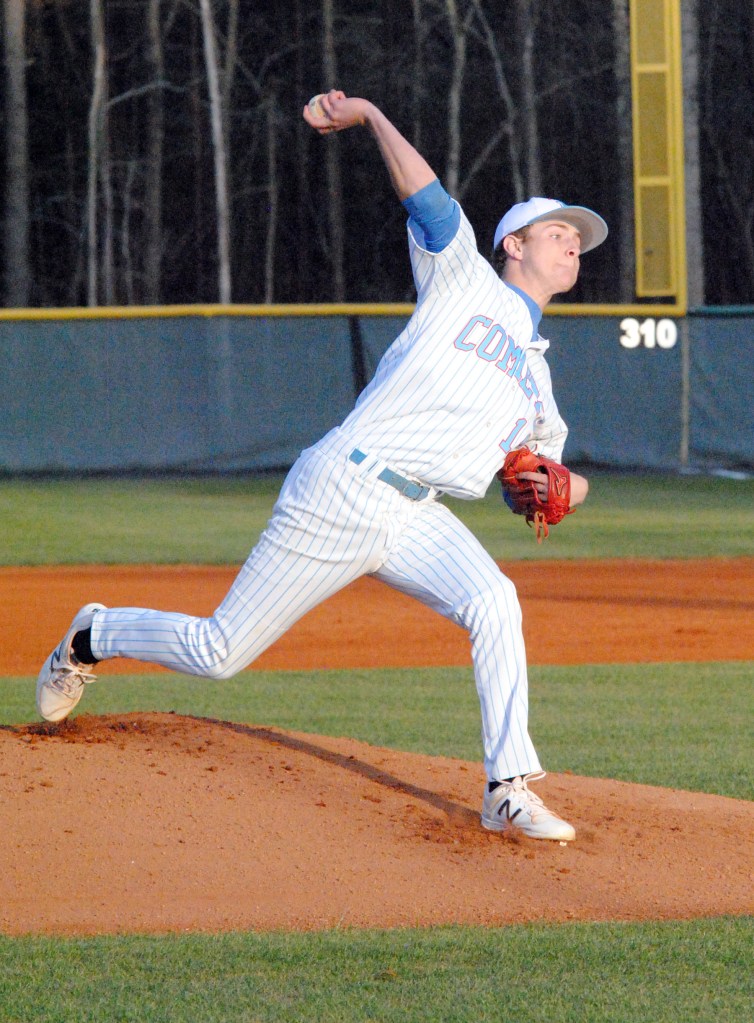 By Charles Curcio
Sports Editor
Four of Stanly’s five high school varsity baseball teams made the playoffs last season and look to do the same again as the 2018 season opens on Wednesday.

Albemarle
In the new world of social media, the Bulldogs have a hashtag for this season to go on the team’s Twitter, Instagram and Facebook accounts: #AttackTheDay.
Second-year head coach Corey Dick, the all-time leading home run hitter in high school baseball in Stanly back in his playing days, leads a young team which showed vast improvement on the field despite going 2-22 on the season.
Returning for the Bulldogs this season are seniors David Swaringen (RF) and Kris Kendall (LF), junior Zack Simmons (P/IF) and sophomores Crafton Mansfield (P/Util.) and Logan Lilly (IF/OF).
New additions to the team include senior Logan Donnally (1B/OF), juniors Ross Griffin (IF/OF) and Levin Nall (RF) along with sophomore Gage Dennis (P/SS).
Starters to this team will include three sophomores making their debuts as varsity starters: Morgan Bunch (C), Gavin Olivieri (3B) and Judson Mabe (2B).
“We look forward to competing for seven innings while having fun and playing the game the way it should be played,” Dick said. “All of our guys have been very committed and excited to take the steps necessary to get back to the top and stay consistent. As coaches, we are already proud of their hard work and can’t wait to play.”
The Bulldogs jump right into Yadkin Valley Conference play Wednesday night at home against North Rowan.

Gray Stone
The Knights set a school record for wins in a season and made the playoffs for the second time in as many seasons for Barry Keith, who enters his third year at the helm of Gray Stone.
Returning starters include seniors Casey Kruger (P/OF), Seth Lamarre (1B/3B) and Clayton Broadway (P/OF) and juniors Hunter Smith (C/P), Chase Viscomi (2B), Jack Foley (P/3B) and Alex McDow (P/OF).
Ben Whitesell started for the Knights as a freshman as a shortstop and pitcher and returns for his sophomore year this season.
Also returning players from last year’s squad are juniors Alex Dennis (OF) and Jonathon Null (1B).
A promising newcomer for Gray Stone is outfielder Dylan Tuzenew.
Keith said this season’s squad is the oldest he has had in his two-plus seasons with  Gray Stone, with seven guys that can pitch and a pair of catchers.
He added the team’s major improvement this season is defensively, specifically arm strength, while the team should have more pop coming off the bat offensively.
“Our team goal is to win 10-11 games and to sneak into the third spot in the league to make the state playoffs for the third consecutive year,” Keith said.
Gray Stone also opens the season with a conference game, hosting North Moore on Wednesday.

North Stanly
The 2017 season for the Comets was one of unparallelled success for North Stanly and head coach Will Davis.
North was 23-7 overall, setting a school mark for most wins in a baseball season. It won the Uwharrie Athletic Conference tournament championship and the Comets reached the 1A Western Regional Finals, losing in three games to the Murphy Bulldogs.
Returning starters for the Comets include senior Jordan Howard (RHP/SS), the ace of North’s starting rotation, while other senior Kolby Lamp (2B/RHP) gives the Comets solid defense in the middle of the diamond and is the team’s vocal leader, Davis said.
A talented junior class for North is led by Carson Lowder (SS/RHP), who will provide power on offense and be the team’s closer on the mound.
Junior Hunter Sells moves from first base to catcher this year for the Comets and adds power to the North offense.
Drew Little (LHP/1B) moves into a full-time role this year; the junior will hit in the middle of the lineup and see more time on the mound.
Junior Colby Russell leads the North outfielders and will be expected to be an RBI threat in the middle of the Comets’ lineup after he worked his way up to varsity from JV last season.
North’s leadoff hitter will be Jacob Clayton (OF/P) bringing speed to the top of the lineup. Davis said Clayton will help the team’s on-base percentage numbers along with being the main arm out of the bullpen.
Returning junior Garrett Clark (OF) will add speed and arm strength in the outfield this season.
One key returning underclassman this season will be sophomore Rhett Lowder (RHP/IF), who will move into a starting pitching role for the Comets as a full-time varsity player.
Sophomore Ethan Walters (IF/OF) brings solid defense to the team and will see more playing time this season all over the field.
Newcomers to the team include Garrett Vanhoy, Brody Lowder and J.D. Whitley, who will play both infield and outfield and bring extra speed on the basepaths.
Logan Johnson joins the Comets as well as a secondary catcher. He will possibly see time at first base.
“The guys have worked hard this fall to get better; once we get everyone else back from basketball and injuries, I believe we will be very competitive,” Davis said. “Our pitching and defense will be solid, if our offense hits it we should be fine throughout the year. We will probably have to face every team’s best pitcher this year, which is what we want to see.”
The Comets open the season at 5 p.m. Wednesday at South Davidson.

South Stanly
The past nine years for the baseball program at South Stanly have been ones of major success.
Since head coach Terry Tucker took over in 2009, the Bulls are 199-79 overall (71.6 percent), including state final appearances in 2009, 2011, 2012, 2013 and 2015, with three state championship titles to show for it.
Six times in the past nine years, the Bulls have won 20 or more games, with last year’s 14-13 mark one of the glaring exceptions during that time. South has finished over the .500 mark eight times in nine campaigns.
South finished 7-3 in the conference last season, reaching the semifinals of the conference tournament and the second round of the state playoffs.
Returning for the Bulls are seniors Logan Spivey (SS/3B/RHP), Brevan Tucker (OF/C/RHP), Jake Dennis (1B/3B/RHP), Ryan Laton (SS/RHP) and Noah Carpenter (RHP).
Also returning for South are sophmores Sawyer Smith (SS/2B/RHP) and Drake Page (C).
New to the Bulls are juniors Jake Almond (OF/RHP) and Mabe Campbell (1B/RHP) and sophomores Hayden Brown (OF/RHP) and Cam Bowers (2B/RHP).
“Pitching should be strong, especially in numbers. We have several kids that should be able to give us quality innings this year,” Tucker said.
South returns the infield from last season in its entirety, but Tucker said the key to success for the Bulls in 2018 will be on offense.
“If we do the small things on offense to score runs, we could have a good run this season.”
The Bulls open at West Montgomery on Wednesday.

West Stanly
West Stanly returns seven starters from last year’s team which claimed the Rocky River Conference championship and reached the third round of the state 2A playoffs, finishing 17-11 overall.
Chad Yow enters his fourth season as the Colts’ head coach with an overall record of 75-33 (69.4 percent).
Returning for the Colts are senior Tyler Captain (IF/P) and juniors Brady Parker (C/1B), Lukas Scott (P/C), Trent Wilson (OF/P), Laton Burleson (IF), Cody Kidd (OF/P) and Daniel Burleson (IF).
New to this team are Zach Grice, Hunter Stoker, Koltyn Hatley, Jaron Price and Nathan Eury.
“We are looking to defend our conference championship and make a push deep into the state playoffs,” Yow said.
The Colts host Union Academy to open the season at 6:30 p.m. Wednesday.