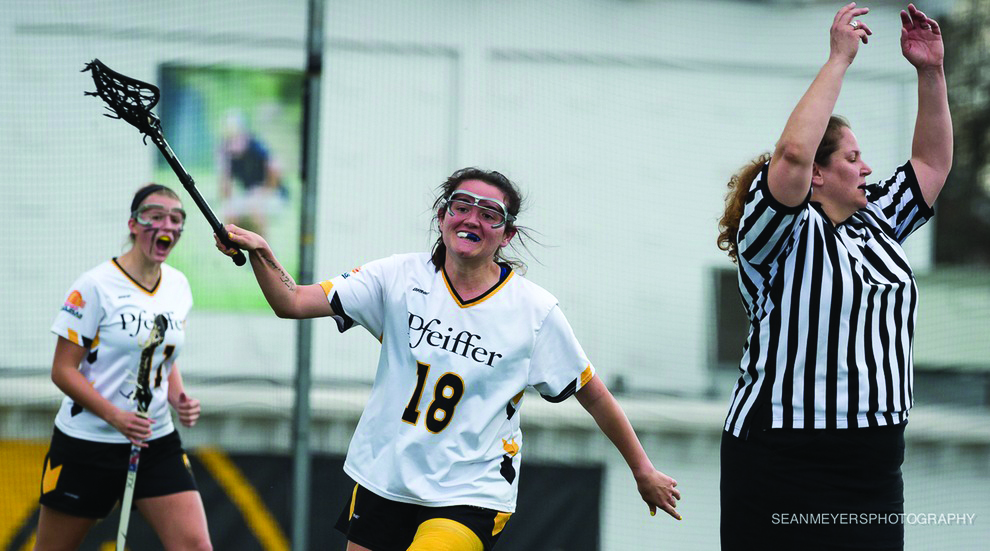 The Pfeiffer women’s lacrosse team (2-1) handed Piedmont (3-1) its first defeat of the year thanks to a performance from senior Molly O’Friel. O’Friel tied the program record with nine goals and needed just 10 shots to achieve that feat. O’Friel added nine ground balls, six caused turnovers and five draw controls in the dominating performance.
O’Friel joins Ashleigh Kassab (who scored nine goals in a game twice) and Karen Hosmer as the only Falcons to score nine times in a game. Also, with her scoring outburst, O’Friel topped the 100 goal mark for her career. O’Friel currently has 105 goals scored in her Pfeiffer career.
The Falcons dominated the contest and held a 37-10 advantage in shots. Piedmont struggled with turnovers all afternoon, giving the ball away 35 times. Pfeiffer was 19-for-22 on clears, while the Lions struggled to a 10-for-26 showing.
Sam Hanlon made one save to earn her second win in goal. Mattie Keaton suffered her first loss, but made six saves on the day.
Kaley Hyatt scored her first two goals of her career and Meagan Bourque added three goals and two assists. Josie Lent tallied one goal and two helpers, while Kylie Lode dished out three assists.
The Falcons return to action on Saturday when they complete their 3-game homestand with a 1 p.m. matchup against Brevard.