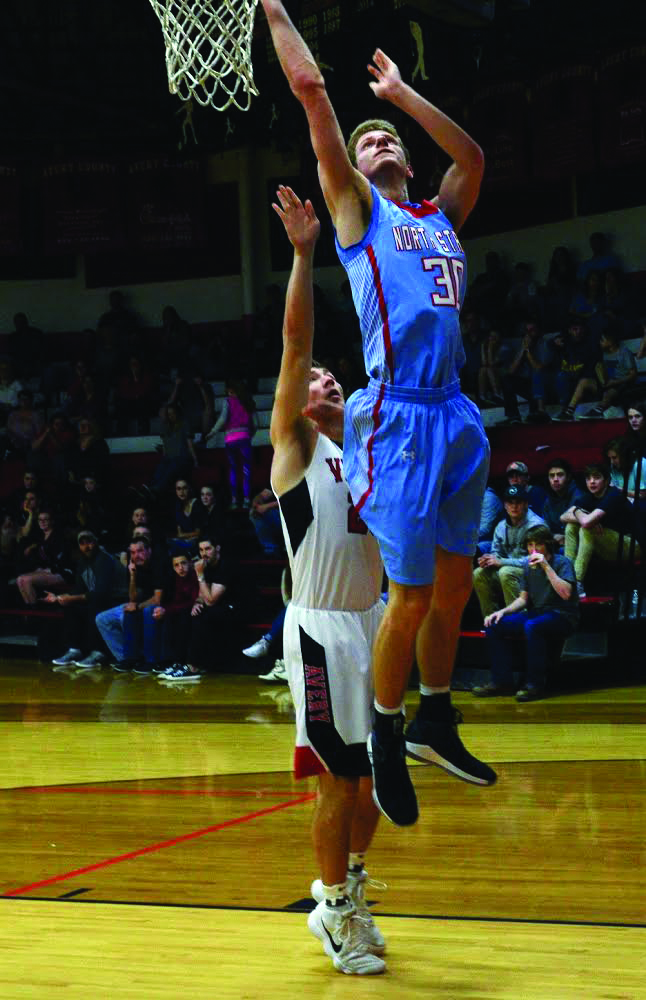 By Charles Curcio
Sports Editor
Since joining the 1A classification ranks in 2013-14 basketball season, the North Stanly Comets men’s basketball team has reached the third round twice, including two seasons ago, but the Comets had never gone past that round.
On the road Saturday night in the third round of the state 1A playoffs, North’s offense set a season high for points in a game and posted the third-highest margin of victory on the season with a 41-point win at the Avery County Vikings, 90-49.
Bryson Childress led the Comets (24-5) with 25 points, his fourth game of scoring 20 or more points. The junior guard was 8-of-13 from the floor, including 5-of-9 from the 3-point arc and 4-of-5 at the foul line. He also led North with three steals.
Jason Doerr scored 14 of his 20 points in the paint for North Stanly. He shot 9-of-14 overall and led the Comets with nine rebounds and added two steals.
Kolby Lamp reached double figures for the Comets with 14, hitting 5-of-6 shots, while Carson Lowder was 2-of-6 from the 3-point arc and added 12 points.
As a team, North Stanly was 34-of-55 overall (61.9 percent), hitting 14-of-27 on 3-pointers (51.9 percent). The Comets were also 8-of-11 at the line.
Addison Cord and Rylei Smith also each added six rebounds for North.
Deacon Heath hit 8-of-12 shots from the field and led the Vikings (20-7) with 21 points and three assists. Chase Kirkpatrick reached double figures for Avery with 10.
As a team, the Vikings shot 17-of-42 overall (40.5 percent), including 5-of-21 from long distance and 10-of-15 at the free throw line.
North outscored Avery on second-chance points (20-2) and had 19 points off 10 Viking turnovers, while the Comets turned the ball over eight times but only allowed two points off a turnover in the game.
“We shot the ball tremendously well; the ball moved. We didn’t settle for the first shot,” North head coach Chris Misenheimer said. “I thought the key to all of it was our defense was outstanding. Our guys talked well, communicated, forced them into doing things they weren’t comfortable with which led to open looks in transition.”
Misenheimer credited Smith and Doerr for controlling the boards, while adding the team’s overall efforts were “the best we have played all year long as far as combining offense and defense.”
The road gets more difficult at 7 tonight when the fifth-seeded Comets travel to Winston-Salem Prep to take on the No. 1 seeded Phoenix in the Elite Eight.
“We definitely need another (big effort) to advance over Winston-Salem Prep. I told our guys, ‘What do we have to lose? Keep playing the way we’ve been playing and take care of business. You can’t be hesitant,’ ” Misenheimer said.
Sports Editor’s Note: Thanks to Jamie Shell of the Avery County Journal for contributing to this story.