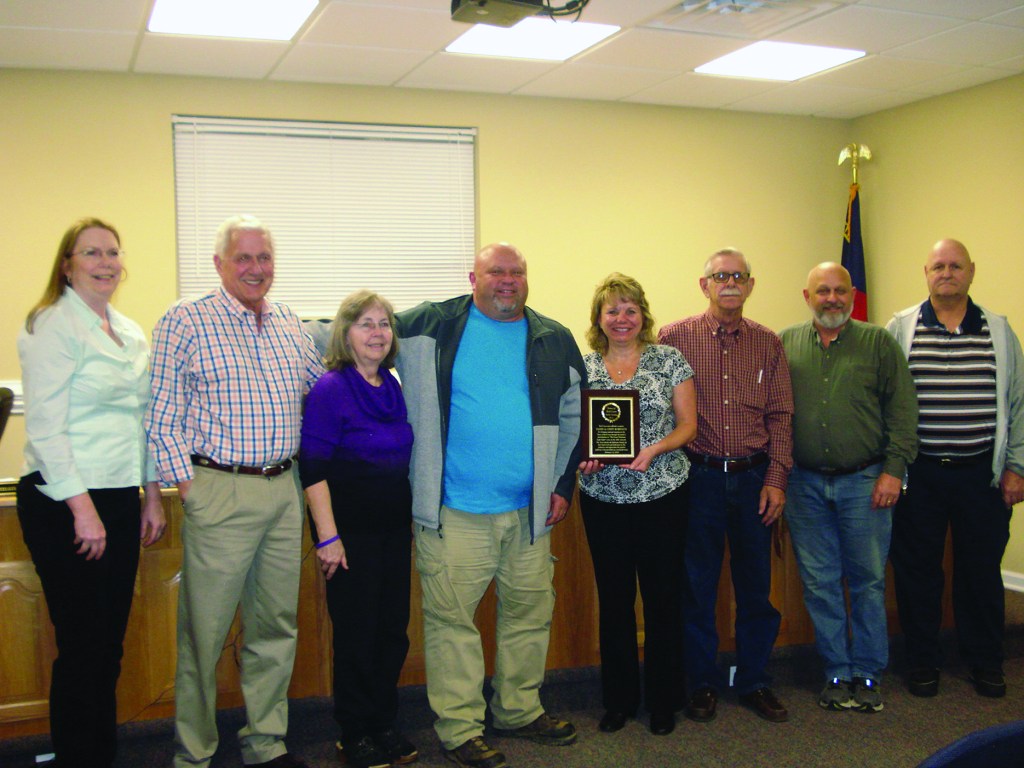 By Imari Scarbrough
for the SNAP
Red Cross residents Darin and Cindy Robinson were recognized by their town council Feb. 12 for helping bring positive attention to their town.
“We appreciate what you two did on ‘Light Fight’ on ABC and putting Red Cross on the map,” Mayor Larry Wayne Smith said as he presented the couple with a plaque.
Councilman Jerry Jordan echoed the sentiment.
“You all are naturals in front of the cameras,” he said.
The Robinsons were thankful for the recognition.
“This really means a lot to us,” Darin said. “It really does.”
The plaque contains a brief thank-you note from the town.
“Red Cross officials recognize Darin and Cindy Robinson for bringing national attention to the town of Red Cross through the family’s participation in, ‘The Great Christmas Light Fight’ series on the ABC network,” the plaque reads. “The town thanks the Robinson family for their hard work and dedication in this endeavor, and appreciates the positive publicity it has provided for our wonderful town.”

Jordan told the council he wanted to check on the status of a problem the town has had with the Stanly County Sheriff’s Office.
Jordan said there had been a billing issue between the two. Councilman J.J. Curlee said the town spoke with a billing representative at the sheriff’s office as deputies hired for protection sometimes went over the 48 hours per billing cycle that the town had contracted to pay them.
Town Administrator Aloma Whitley said the issue came down to a difference in the way hours were logged, adding the sheriff’s office didn’t know that it had gone more than 48 hours in some cycles. Whitley said a solution was worked out and that the sheriff’s office will watch the hours worked more closely in the future.
During the time for council comments, Jordan expressed his disappointment in the sheriff’s office.
Within the last few years, if there was a 911 call made, the response time was about three and a half minutes, Jordan said. Deputies were easily found. Now, he believes they are in the area less.
“You don’t see them,” Jordan said. “You just don’t see them out here.”
He said he wasn’t sure why they were in the town less, but that it was a poor change for the county.
“Something’s going on and the people suffering for it are the people of Red Cross,” he said.
He addressed Jeff Crisco, who had attended to announce his candidacy for sheriff.
“Mr. Crisco, if you get elected I hope you will remember that we’re here,” Jordan said.
Jordan said he believes a greater presence of deputies in the area would decrease crime, pointing out that the Dollar General was broken into across from a sub-station of the sheriff’s office.
“Heck, we don’t want them to have to receive combat pay,” he said.”

Jordan also said the town hall is outdated and should be fixed up.
“Aloma and I talked one day and we realized we haven’t really done anything since we bought and moved in in 2007,” he said.
He asked the council to consider setting money aside in its FY 2018-19 budget to update both the interior and exterior of the building.
A budget workshop was set for 7 p.m. Feb. 19.
After that workshop, Whitley said via email the council discussed several ideas for updates: “… putting hardwood flooring where the older carpet is now; replacing the old hot water heater; refinishing the metal railing on the back entrance porch, some outside painting — nothing major.”

The council heard from Crisco, who approached the council to apprise them of his plan to run for sheriff in the upcoming election.
Crisco told the council that he is unimpressed with the current leadership of the sheriff’s office and that he believes there needs to be a harder focus on drug control. He said that drugs are often brought through Oakboro and Red Cross on their way to Albemarle; heroin often makes its way through from High Point going to Oakboro or Norwood, he said.
“It’s an epidemic at its best,” Crisco said, later adding that the amount of drugs would surprise them.
“It would blow your minds to know how much drugs are brought down Highway 24-27 every day,” he added.
The council also discussed setting its election filing fee. Erroneously believing that the fee had previously been set at $16, the council voted for that, though later said it would be set at $15, the amount it has actually been.
The board also set April 14 as the day it will ask Waste Management to pick up bulk items/white goods.
The next regular council meeting will be at 7 p.m. March 12.

Imari Scarbrough is a freelance contributor for The Stanly News & Press.