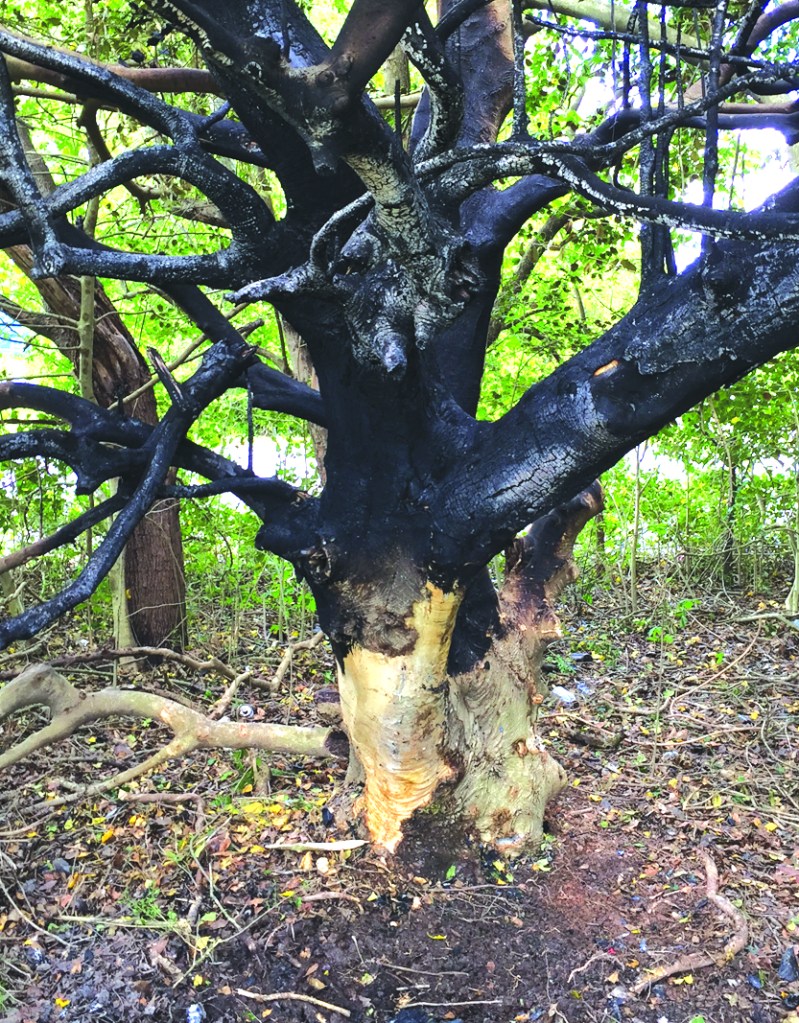 Contributed photo A tree near the boat landing just beyond Badin Mart shows the scene of the crash that claimed the life of a suspect in a breaking and entering at Mazatlan Restaurant.

A burglary suspect who fled police in a high speed chase early Wednesday morning was killed when the car he was a passenger in slammed into a tree and burst into flames.

A male suspect died in the 12:48 a.m. crash while police managed to save the driver by pulling her from the wreckage before the blaze spread.

“We tried but were unable to get the passenger out,” said Albemarle police Chief Danny Bowen.

Driver Shaidae Vontrel Glover, 23, of Charlotte, suffered serious injuries in the crash. She was taken to Carolinas Healthcare System – Northeast in Concord where she remains, according to Capt. David Dulin.

“As the officer was getting the driver out he noticed a flame inside the car,” Dulin said. “Before he could get the second person out, the car was fully engulfed in flames.”

At this time, it’s unclear if the passenger died from impact or the fire.

“Albemarle and Badin police officers attempted to extinguish the fire to get the passenger out,” Bowen said.

Police are withholding the name of the deceased, pending confirmation from the medical examiner. A positive identification will be made from dental records, Dulin said.

Glover and her believed boyfriend were fleeing Albemarle police after they were observed burglarizing Mazatlan Restaurant, Dulin said.

An Albemarle officer first noticed suspicious activity on Hilco Street while on patrol. He saw a car moving without its headlights on. After doubling back on N.C. Highway 740, the officer found a 2018 Chevrolet Equinox backed up to the entrance of the restaurant, Dulin said.

“The officer saw the driver wearing a ski mask and a person coming out of Mazatlan’s,” Dulin said.

The male suspect jumped inside the car as it sped away along N.C. 740 toward Badin. A police chase ensued.

As Glover sped into Badin, she veered off the right side of the roadway toward a boat landing just beyond the Badin Mart. Glover then slammed into the tree at a high rate of speed, police say.

Police found two sets of glass doors were broken out at the Mazatlan Restaurant.

“We’re not aware of anything missing at the restaurant at this time,” Dulin said. “The officer might have spooked them before they could take anything.”

Police have since learned from other agencies that the couple were suspects in similar break-ins that targeted Latino restaurants, Dulin said.

The car used in the crime was a rental.

Charges are pending as the investigation remains ongoing. Police are consulting with the District Attorney about possible charges.

Glover could be charged with homicide since the commission of a felony resulted in a death.