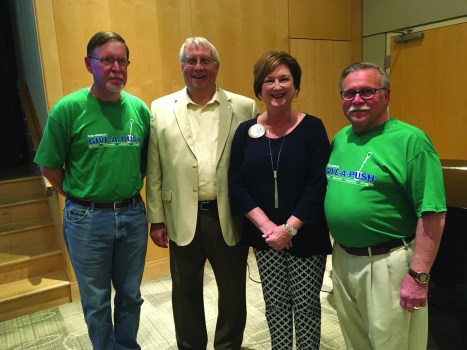 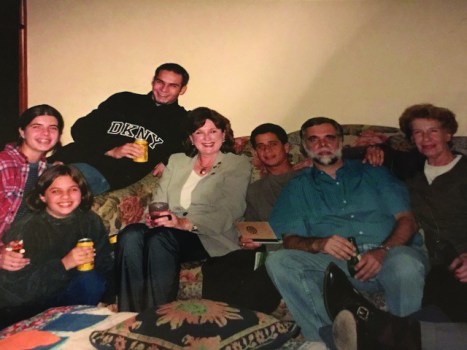 Angela Mills, who was president 1997-98 and is seated at center, is joined by the Baptistas, her host family in Brazil during a group study exchange program through Rotary International in 1998. 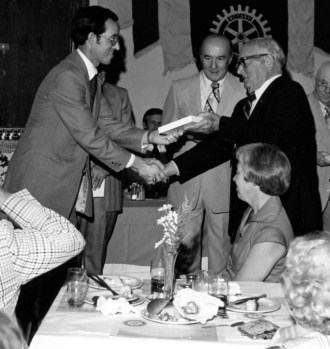 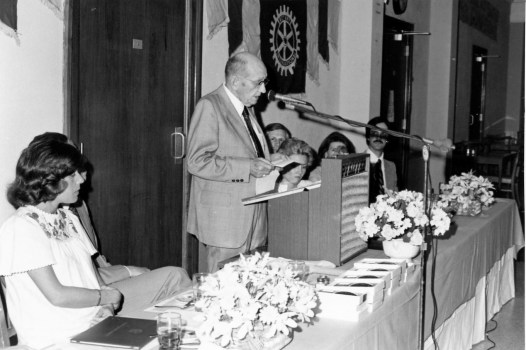 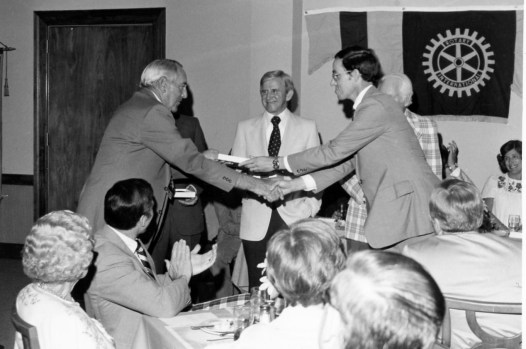 It is literally impossible for most people to remember a time before the Albemarle Rotary Club existed.

Turning 90 this year, the club formed about 12 years after Rotary International was created, making it one of the oldest such clubs in the nation.

“It’s certainly older than all of us,” said Rotarian Mike Riemann during a special presentation on that history early this month.

The club — originally chartered by a Rotary group in Charlotte — started out with 21 members who met at Central United Methodist Church every Thursday at noon. “And as far as I know, the club has met on Thursdays at noon for the past 90 years,” Riemann said.

While the club’s meeting places and projects have changed over the years, it has kept the same focus, too.

Every community has it’s wishlist, members explained. Parks that need fixing, programs that need funding, people that need helping. And while the Rotary Club is no genie — fulfilling every wish that comes along — it does it’s best to work some magic where it can.

For example, when the club was first formed, there was a major need for medical funds in Albemarle. Tuberculosis was affecting dozens of families and many didn’t have the money for treatment or care.

“And so the club spent a lot of time trying to organize a tuberculosis hospital here in Albemarle,” Riemann said.

It couldn’t have been easy, considering the times.

Formed just a few years before the Great Depression struck, funding of any kind would have been scarce in the club’s first years.

Indeed, club documents indicate fees and dues had to be lowered at that time. But even so, members kept on finding ways to help.

“They were a primary driver for finding a space for the armory then,” Riemann said, noting that building is now used as the Stanly County Senior Center.

Members also contributed to Pfeiffer’s building fund, pushed for nine-month schools in the county and created their first college scholarships in the 1930s.

“Back then there weren’t a lot of fundraisers either,” Riemann said. “They just passed around the hat and people ponied up.”

With that kind of determination, perhaps it should come as no surprise that the projects got more numerous with the end of the Depression.

In the 1970s and 1980s, members also took trips to places such as Minneapolis and Indianapolis to get ideas from clubs there. Others were sent to Cuba and Brazil to help pass along ideas to Rotary clubs there.

But the biggest project the Rotary club was ever a part of actually started in Albemarle.

While Rotary Club member Sherrill Smith was repairing some water damage done by a leaky roof at the YMCA, the father of a handicapped child started telling him about how hard it was to find a place for his son to play.

“He (Lowder) said to me, ‘I’ve always dreamed that we would have a playground here for all children,’ ” Smith said.

At the time, the only playground equipment at the YMCA park was a wooden merry-go-round and some monkey bars, Lowder noted. So when he and Smith took the idea back to the Rotary Club, it quickly drew a tide of support.

“It was such a massive undertaking,” Smith said.

Dozens of volunteers from PUSH America — which promotes handicap accessibility — as well as Rotary members from across the region converged on the park.

“We put them up in the YMCA and it was wall-to-wall in the gym with all the sleeping bags and tents in there,” Lowder said. “It was just an absolute joy.”

After everything was completed, it was dubbed the “All Children’s Playground” in honor of that first conversation under a leaky roof.

And the work didn’t stop there.

The next year, the Rotary Club gathered another $100,000 in funding to install restrooms at the newly-renovated park.

“It remains the largest project in our club’s history,” Riemann said.

Currently holding steady at about 100 members, the club isn’t slowing down any.

Over the past couple of years, that desire to give all children a place to play surfaced again in another project. In partnership with the city, the club funded new floors and window treatments at the E.E. Waddell Center gym, as well as a new walking path and baseball field improvements.

Funds this year went to sponsor the RoboStanly competition for elementary and middle school students.

“You’ve seen all the projects, you’ve seen those things we can do,” Mills said. “We truly have a great group of men and women that work together to make this community a better place.”