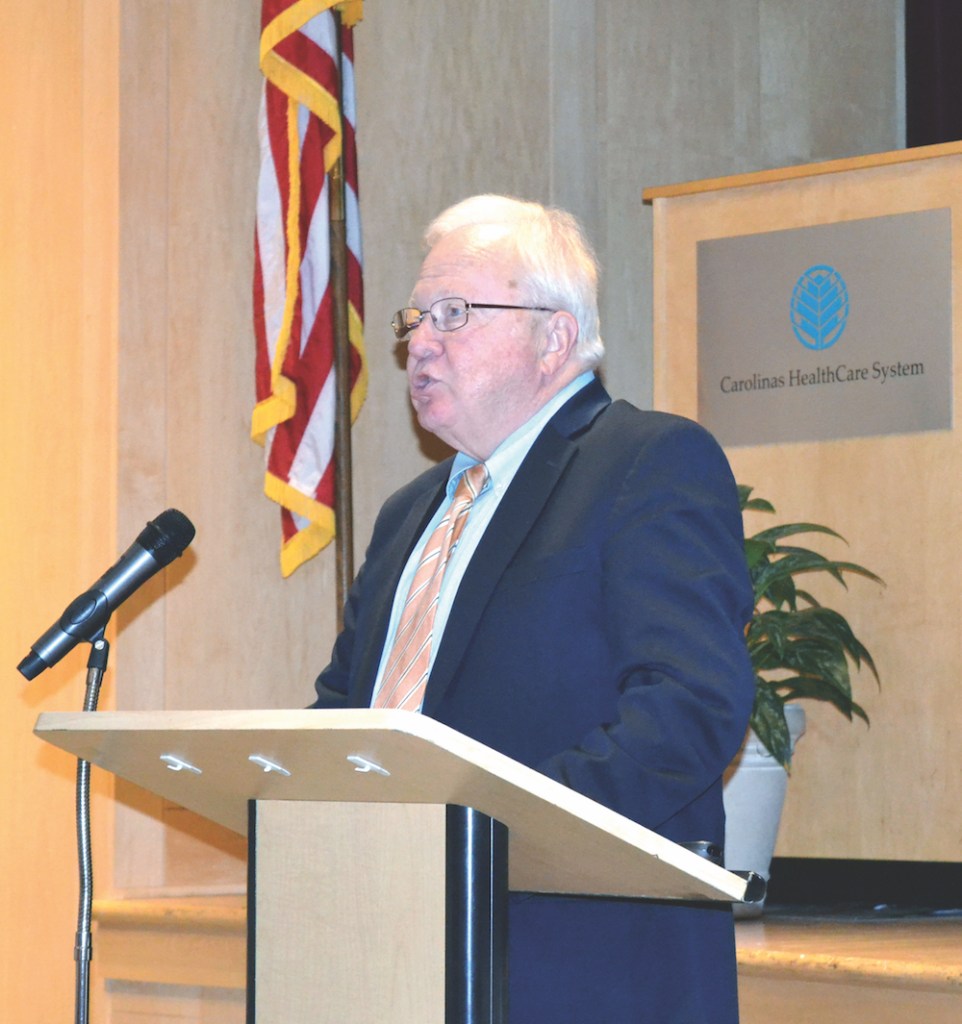 Last week’s Albemarle Rotary Club luncheon looked as if an old fashioned political roast was about to unfold.

Members and visitors alike were treated to a humorous rearview mirror glimpse at North Carolina’s politics told through the anecdotal accounts of Phillip J. Kirk. His juicy nuggets, told through Kirk’s folksy cadence and witty storytelling, had the audience in stitches as well as intrigued. Unlike the chicken entree, he left the crowd wanting more. A Salisbury native and where he still resides today, Kirk has lived, mostly worked, an illustrative life. Most of his career involved politics, if not as an insider then on its periphery. And he has been busy. For more than 40 years, Kirk has served in leadership roles in government, at educational institutions and within the business community.

He began his career in government in 1970 as the youngest state senator elected in North Carolina history. He then served as chief of staff for Govs. Jim Holshouser and Jim Martin as well as U.S. Sen. Jim Broyhill. Kirk also served as secretary of the Department of Health and Human Services for two governors. Overall, he has worked with 10 of the state’s governors.

In 1989, Kirk was named president of N.C. Citizens for Business and Industry, the state’s most powerful business lobby and official state chamber of commerce. During his 16-year tenure, Kirk was consistently ranked among the top 25 most effective lobbyists in North Carolina.

Albeit a Republican, nothing about Kirk hints of any partisan bite. He speaks affectionately for people of differing politics and he’s equally respected by those from all political persuasions.

But Kirk knows more about North Carolina than only its leaders, he understands the policies that make the Old North State go. Therefore, his keynote presentations are enlightening, even inspiring.

Between his knowledge and talent for speaking, it’s not surprising today Kirk owns a speaking and consulting business.

He was kind enough to put his words down in written form through a Q&A courtesy of The Stanly News & Press.

Below is a series of questions along with Kirk’s responses.

Q: Which of the N.C. governors that you had the pleasure to work with had the best sense of humor? Give a short example.

Kirk: Bob Scott. I was a 26-year-old Republican State Senator from Rowan County. Back in the good old days of bi-partisan co-operation and civility, Gov. Scott appointed me to several boards and commissions. Some Rowan Democrats criticized him for it, feeling it would help me to get re-elected. Gov. Scott was reported to have said, “We need at least one Republican in the group and he is too young to have any influence.”

Q: What was the most significant political event that you participated in and why?

Kirk: Introducing candidate Gov. George W. Bush to a group of educators in Greensboro when he was running for president. The Secret Service told me I had two minutes for my introduction; then they changed it to 90 seconds; and shortly before the program began, it was changed to 20 seconds. Meeting and talking with the president and Laura, his wife, was very meaningful especially when he was elected president a few months later.

Q: You appear to have worked with a lot of men named Jim. Any explanation for that?

Kirk: No explanation for that; however, my middle name is James although I have never gone by Jim. A friend of mine in Gov. Martin’s office called me “P. Jim” because she wanted me to run for governor and thought I would have a better chance if my name were Jim! For 28 years we had governors named Jim and all were Presbyterians. Gov. Mike Easley broke the streak with his first name and he is of the Catholic faith.

Q: Today’s state politics appear to have become more acrimonious compared with the past. What are your thoughts on the sharp partisan politics in North Carolina? Or, why can’t we all get along?

Kirk: When we were a one-party state for more than a century, the acrimony was primarily in the Democratic Party. Now that we are a two-party state, it is naturally more divisive. However, a review of history shows politicians fighting, cursing and actually shooting each other. Now we have social media which instantly reports everything that happens. Many Republicans and Democrats take their politics too seriously and do not even attempt to be civil toward each other. That is sad.

Q: I understand you’re a voracious reader, especially John Grisham. What is it about Grisham’s work that makes you a fan — include your favorite novel of Grisham?

Kirk: I have always loved to read; however, many years ago all my reading was related to my various jobs in education, politics and business. I decided to select one author and set a goal of reading every book written by that author. I don’t remember how or why I chose John Grisham, but I probably wouldn’t have selected him if I had known he would write more than 30 books! I don’t have a favorite. In fact, I forget what each one was about after I finish reading it and go to the next one. He is an excellent writer, as is John Hart from Salisbury. I read all of his books, too.

Q: What would you do different in your career if you had a “do over?”

Kirk: I tell young people who occasionally seek my advice that I have two main regrets about my life, other than I still don’t know what I want to be when I grow up! One is that I did not spend enough time with my wife and children when they were young because of my work although many parents say the same thing. Second is that I did not hire a financial consultant to develop a plan which would have required me to save and invest more money.

Q: Handicap the future of North Carolina politics? Any revolutions on the horizon?

Kirk: When I became involved in politics as a Teen Age Republican in Rowan County, there were no Republicans in office. Now there is one Democrat in a major office! Statewide there were no Republicans in office. Now the Republicans have super majorities in the North Carolina House and Senate, majorities in the U. S. House and Senate, majority on the Council of State, majority on the N. C. Court of Appeals and did have a majority on the N.C. Supreme Court prior to the last election as well as having a Republican governor. The pendulum may swing back, but hopefully not too far! North Carolina is said to be the most competitive in the country when it comes to elective politics.

Q: Share a memorable event from your work in state politics.

Kirk: While serving as Chief of Staff for Gov. Jim Martin, Eddie Hatcher held 20-some hostages at The Robesonian (newspaper in Lumberton) for 12-14 hours. With coaching from the SBI, I negotiated with Hatcher for the safe release of the hostages. We talked by phone at least five times as he made his demands and I worked on the answers. I was so afraid that any missteps by me could result in some deaths. When Eddie finally released all the hostages and walked out with his hands up (I was watching on television), I literally fell to the floor and cried and thanked God.