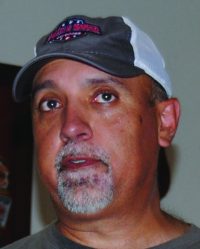 Members of the Badin community came together Memorial Day weekend to honor active members of the military as well as veterans with a morning on the lake fishing and lunch.

The event was hosted by Badin Fire Department and arranged through the Valor and Honor Outdoors Organization, a 501(c)(3) nonprofit group. Seventeen soliders and one Marine enjoyed a day of fishing, then were treated to a barbecue lunch at the firehouse.

Valor and Honor states on its website, www.valorandhonoroutdoors.org, the group’s mission is “providing unique outdoor experiences to active-duty military, veterans and their families.”

Outdoor experiences Valor and Honor provide include fishing, hunting, camping, kayaking, archery, ATV riding, horseback riding and more, all free to participants, including the necessary equipment and customary items for the activities.

Valor and Honor was founded by John Perez, who has a self-described “very military passionate family.”

Most of the funding for events came from Perez and contributors, but this year the group got its first corporate sponsor, Calcutta, which provided a sizeable amount of fishing and outdoor gear shared by the soldiers this weekend.

Enlisting in the Marine Corps at age 17, Perez served six years in the Marine Reserves. His father was in the Navy and Coast Guard, his brother in the Air Force and sister in the Army. Perez’s father-in-law also served in World War II in the 82nd Airborne Glider Infantry and was wounded in Holland.

Perez said the group began through hunting waterfowl and his son, Ben, who has been a competitive duck caller since he was 14.

His son was approached by a former Marine to do a waterfowl hunt organized by another group, the Quantico Injured Military Sportsman Association, in Maryland. After several events with that group, the Perez family decided to host hunts for soliders on their own property near Fort Bragg. Out of the demand for those events came Valor and Honor Outdoors in October 2016.

“We realized there were a lot of therapeutic effects of being outdoors, so we expanded,” Perez said. “Initially, we focused on wounded warriors, but then we got to realize there are other guys that kept that wounded warrior alive on the battlefield and they need some R&R just as much as anybody.”

Having helped 150 participants in 2017, the group has topped 150 this year through the fishing tournament on Badin Lake. Valor and Honor Outdoors has provided trips for more than 300 people in six to seven states in what Perez calls “outdoor recreational therapy.”

But the help the group provides goes beyond a hunting or fishing trip. Valor and Honor also provides licensed counselors to assist soldiers, including one with a high enough security clearance to talk about missions.

“There are stats which show 20 to 22 veterans kill themselves every day,” Perez said. “Part of what we do is relationship building, especially with veterans. When they get out of the military, they miss that camaraderie. That’s one of the things we do through peer networking.”

The organization also helps soliders leaving the service to transition into civilian life through career counseling.

Valor and Honor does an amount of military advocacy by passing out food to veterans and space heaters to needy veterans. Along with that advocacy is coming to schools to do various programs for kids about the military.

The group is completely operated by volunteers, like Badin kindergarten teacher Keely Towne, who contacted Valor and Honor last year to bring members of the 82nd Airborneto do a program at the school. In turn, Badin students created around 300 cards to send well wishes to veterans in the Fort Bragg area.

“I grew up with a military family. My father served for 32 years (in the Navy and Coast Guard),” said Towne, who was introduced to Valor and Honor through friends at her church.

Towne said organizations like Valor and Honor “give (soldiers) a place to have freedom and relax, enjoy each other’s company in times that may not be as stressful…it shows we are there for them.”

Her kids love the military personnel who have visited Badin School.

“They have learned to appreciate what the great men and women do (in the military) that are out there for us,” Towne said. “I think we can teach kids to be patriotic and to know the importance of the service. That’s my goal.”

Jamie Karriker and his family also volunteered their time at Saturday’s event, saying “all the guys at the Badin (Volunteer) Fire Department…rolled out the red carpet for us.”

Karriker thanked Badin VFD and the fishermen for participating.

“We stand up for the guys that are standing up for us,” Karriker said. “These guys have been through a lot; to have an opportunity to give back to them is an awesome experience.”

Chris Donaldson, the command sergeant major of the 505 Battalion at Fort Bragg, talked about the effect events like this fishing outing have on soldiers.

“I’ve seen the (soldiers) that have shut down, but once they get involved in things like this, they open up again. It brings them out from the shadows they are in,” Donaldson said.

He talked about the relationships formed between the community and the members of the military.