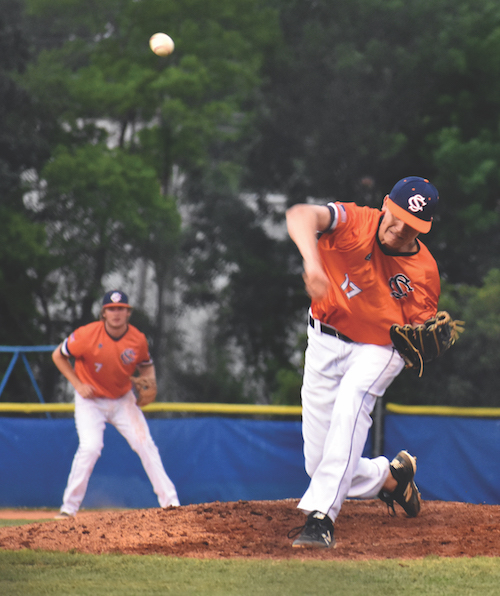 Photo by STEPHEN WIDENHOUSE/Post 76 Baseball Tyler Captain fires a pitch to the plate in Sunday’s game.

By Charles Curcio
Sports Editor
The Stanly County Post 76 American Legion baseball team returned home on Sunday evening after going 1-1 on a brief two-game road trip the previous two days.
Friday saw Post 76 rally in the seventh inning on the road at Eastern Randolph to win 7-6 before dropping Saturday’s game at Kannapolis 6-1.
On Sunday, Post 76 opened a scheduled four-game home stand with a 5-2 non-league loss to Eastern Randolph Post 81.
Logan Jarosz went four innings to get the win for Post 81 (1-3), allowing no earned runs on two hits in four innings. Hunter Little struck out two in the seventh to earn the save.
Tyler Captain took the loss for Stanly (3-3), allowing three earned runs on six hits.
Both teams stranded runners in scoring position for the first three innings before the visitors broke through for four runs in the top of the fourth. Two singles and an error loaded the bases for Tyson Measimer, who singled in one run. After a sacrifice bunt, Connor Murphy delivered an RBI single and Little later drove in two more runs with a hit.
Both of Stanly’s runs came in the bottom of the fourth without a hit. Cody Kidd and Lukas Scott both walked, then Kidd scored from second when Colten Austin reached on an error. Scott moved to third and then scored on two wild pitches to cut the deficit in half, 4-2.
Measimer later added an RBI sacrifice fly in the top of the fifth off Post 76 reliever Jake Allen.
The home stand continues on Wednesday with a rematch at Don Montgomery Park against Eastern Randolph. Stanly then opens league play on Saturday against Mocksville.