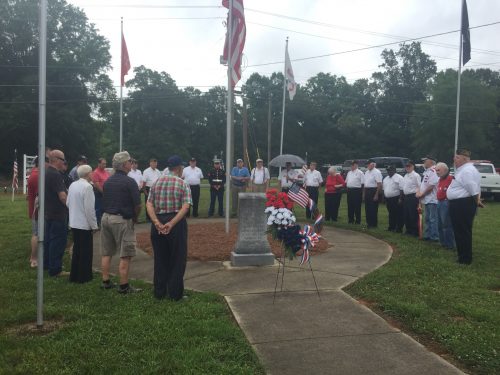 By Imari Scarbrough
for the SNAP
Norwood veterans took time to remember fallen servicemen and women on Monday morning.
The Veterans of Foreign Wars Post 6183 held the ceremony on the lawn of the post’s office. The Rev. Bob Cauble, post chaplain, offered an invocation before the post color guard presented the flag.
Stephanie Ritchie, mother of Marine Corps. Lance Cpl. Tristin McRaef, sang the National Anthem and Eagle Scout Charlie Almond led the Pledge of Allegiance.
Post Cmdr. Bob Hooks gave the opening remarks before Norwood resident Becky Wall sang.
Hooks, who asked that all present pray for peace, also introduced the event’s speaker, former Norwood mayor Beverly Johnson.
Johnson, whose grandfather, uncle and cousins are all veterans who survived, gave a brief history on Memorial Day. She noted that a group of southern women began honoring the graves of soldiers and noticed that the graves of Union Army soldiers were left untended.
A secretary for a women’s group wrote to newspapers asking for people to honor fallen soldiers, Johnson said. Soon afterwards, Gen. John A. Logan, leader of the Union Army veterans group the Grand Army of the Republic, asked his post to hold a similar remembrance called Decoration Day.
Many states claim to have held the first Memorial Day ceremony, Johnson said, adding that Waterloo, New York is the officially-recognized first place to have held one.
Originally, May 30 was the holiday, but in 1968 Congress moved it to the last Monday in May.
Johnson asked that everyone present honor the National Moment of Remembrance, a moment of silence, at 3 p.m.
She also thanked those in the post who had helped to put together a trip to France two years ago that was held to honor two local servicemen buried there.
Johnson encouraged those present to honor veterans, offering her own thanks, saying, “I’ve certainly received more than I’ve given.”
All veterans present in the group gathered at the flagpole, where McRaef placed the wreath.
Senior Vice Cmdr. Steve Culp performed the roll call, naming all local veterans listed on the post’s wall of fallen servicemen.
He said that most of the post’s veterans are in their 70s and that they need younger members to carry on the post, though he noted that he hopes that there are no future veterans since he wishes for no more wars.
“We only read these names once a year, but most of us spend a few minutes reading the names on the wall at our meetings each month,” he said.
Just inside the post’s building is a display with photos of fallen local veterans along with their names and dates of death.
Cauble said the closing prayer and the Stanly County Disabled Veterans of America Chapter 12 performed a rifle salute and taps.
The color guard was made up of Tony Hinson, Dwight Poplin, Robert Watkins and Walter Watkins.
After the ceremony, Eric Van Brero, incoming post quartermaster and chairman for the cemetery flags, said the post had put about 770 flags on veteran graves in 14 cemeteries in the county.
Cauble asked that anyone who knows of an undecorated veteran grave in the southern part of the county let the Norwood VFW post know so a flag can be added.
The James P. Lowder Jr. Post 6183 is named after 1st Lt. James P. Lowder Jr., who was killed in action on July 8, 1944.
His brother-in-law, 1st Lt. Wallace B. Shipplett, was killed months later on Jan. 14, 1945.
While they died in separate locations, the bodies of both are now buried in the Epinal American Cemetery and Memorial in France.
Imari Scarbrough is a freelance contributor for The Stanly News and Press.