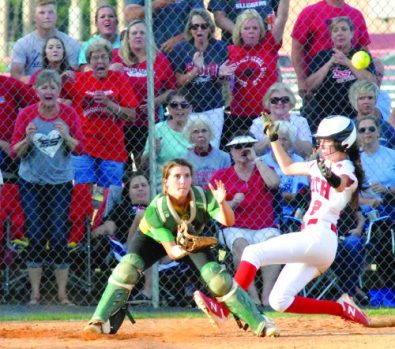 Photo by CHARLES CURCIO/staff The home crowd cheers on South Stanly’s Makayla Poplin as she slides for home Friday night.

By Charles Curcio
Sports Editor
Facing elemination in the second game of the best-of-three softball 1A Western Regional Series, South Stanly turned to a freshman starter in the circle Friday night in Sadie Lee.
She had pitched the final two innings of Wednesday’s opening game without giving up a run or hit to the No. 3-seeded Alleghany Trojans, but South’s rally that night down six runs came up two runs short.
This time, two runs were all the No. 4 Rebel Bulls needed as Lee pitched one batter over the minimum for a seven-inning game, tossing a no-hitter as South evened the series with Alleghany in a 2-0 win.
Lee threw just 70 pitches in the game and was one hit batter away from a perfect game for South (24-6), plunking Nyah Allen with one out in the top of the third inning. Otherwise, the offense for the Trojans (20-5), which produced seven runs in the opening game, could not get another runner on base, making nine straight scoreless no-hit innings thrown by Lee versus the Trojans.
Kenzi Lyall, who struck out 11 and had just one walk in the opening game of the series, took the loss for Alleghany. She allowed one earned run on five hits with six walks while fanning seven.
Three of the walks issued by Lyall came in the bottom of the first, two coming with two outs. Lyall then got South catcher Mattie Hinson to fly out to Paige Billings in right field to end the inning.
Solid defense by Alleghany kept South off the scoreboard in the second inning as well. With two outs, Emma Crump singled to right field, then advanced to third when Kaitlyn Tucker doubled to the fence in left-center field.
With first base open, the next batter, Adison Campbell, struck out, but the third strike was dropped. As the ball got away from catcher Haley Rife, Crump tried to score from third but was cut down at the plate, keeping the game scoreless.
In the top of the third, Allen was hit by a pitch with one out and moved to second on a Billings groundout. The next batter, Lauren Dowell, flied out on the first pitch of the at-bat to right field to end the inning.
A walk eventually led to the opening run of the game for South Stanly.
Huntley Rummage walked with one out in the bottom of the fourth, then after a strikeout, she stole second base. Kaitlyn Tucker then sent a ground ball into right field for a single, scoring Rummage to put the Bulls up 1-0.
Later in the fourth, Tucker tried to score on a wild pitch but was tagged out at the plate.
South added a run in the bottom of the fifth with a two-out rally. Konner Napier singled up the middle and was replaced on the basepaths by a pinch runner, Chloe Rabon.
Hinson moved Rabon over to second base reaching on a fielding error, then Poplin drove Rabon home with a slow ground ball up the middle into center field, putting the Bulls up 2-0.
Lee and South’s defense then retired the final six batters of the game for Alleghany to earn the win, forcing a third game.
“I knew if I kept the ball spinning and moving, they were not going to touch it, so I had that mindset coming in,” Lee said. “I just have faith in myself and my teammates behind me on defense. That’s what you need behind you during a game; it’s not just one player, it’s the whole team.”
South head coach David Poplin said Lee is “strong” and “has a good work ethic, different spin. She has picked up some of the slack from the girls we lost.”
Offensively, Poplin said, “it’s all about timely hitting,” saying teams win ball games with timely hitting and good pitching,”
The third and deciding game of the series was scheduled for Saturday but rain postponed the contest until 5 p.m. Tuesday in Sparta.
The winner of the Western Regional Series will take on the No. 2-seed from the East, the Louisburg Warriors. Louisburg made the third round of the playoffs two years ago, while qualifying in 2017 for the Eastern Regional Series, where the Warriors lost in two straight games to Whiteville.