If you smell sunscreen, it must be summer 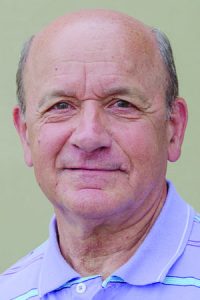 You know it’s summer when the oscillating fan is in full, er, oscillation.
Or, when 1,100 miles of motor racing unfolds on TV while you doze on your recliner through 1,090 of those miles.
Memorial Day is considered the official beginning of summer. That’s when the first brave Americans set out on clogged interstates headed for crowded beaches to offer themselves as burnt offerings to the summer deity, aka, the sun.
Summer must be pleased by the adoration bestowed upon it, returning the favor to us by stirring up tropical storms in the Atlantic.
Ah summer, the time of year when the number 90 is the order of the day — 90 degrees Fahrenheit and 90 percent humidity. So what do we do to combat the heat? Fire up the grill, of course.
We Americans learn to love the summer — despite its torrid shortcomings — as school kids. Summer means freedom from sitting in class all day, doing homework and studying for exams. It’s a reward for the hard work of learning.
When summer comes on I can’t help but remember what I often have considered my most idyllic three months of bliss (prior to marriage, of course). I was 15 in the summer of 1962 and in a time of transition.
I had played Little League and PONY League baseball for the six previous summers. At 15 I was aged out of youth ball but a year away from public work.
Don’t get me wrong, I loved baseball. But not so much the early-morning, two-mile bicycle ride from my home near Highway 64 down to the Franklinville ballpark. Coming back required a half-mile uphill push on my one-speed J.C. Higgins.
In 1962 that was all a thing of the past. I could get up when I felt like it, putter around at will and feel like an elder statesman around those still playing ball.
I did have some responsibilities that summer, including a list of household chores provided by my mother. I also cut the grass and even made some money mowing a couple of yards in the neighborhood.
Despite being too young for full-time work, I filled in for a year-older friend a couple of weekends when he went to the beach. His job was pumping gas at a service station.
Yep, in 1962 gas stations were still full service. When a car pulled up to a pump I’d be johnny-on-the-spot to fill the tank, check the oil, clean the windshield and take the money.
It was my first foray into the world of work and I was thankful that it was only temporary. It was nice to have the money, mind you, but I could not stand having to do it as a regular deal.
Much of the summer of 1962 I spent with Robert, the boy across the road. He was still playing baseball but I’d hang out with him most days after practice.
We’d lull around in lawn chairs underneath shade trees. When it wasn’t too hot, we’d hike into the woods and identify trees using a booklet the state published called “Trees of North Carolina.”
Our tree identification, which we did for fun, turned into a leaf collection for both of us. Those leaves, mounted on plywood panels, served as our science projects the next school year — Robert’s in general science and mine in biology.
We also did a bit of camping that summer in the woods behind Robert’s house. He and his father and brother had carved out space for a tent and campfire.
An older neighbor, Jerry, bought a brand-new, bright-red Chevy Impala that year. Although he palled around with one of my older brothers, he was kind enough to let me ride in the backseat with them when they cruised Asheboro.
I still see Jerry at Asheboro’s Cruise-Ins every summer. He told me recently that he still owns a red ‘62 Chevy.
One other thing happened that summer that delighted all us Penkava boys, but especially our mother. It was the birth of my sister.
Mama said she always cried when she had a boy — and she had four of us. But when she was carrying the fifth baby she was determined to be satisfied with whatever it was.
Jeanne was the girl Mama had always wanted to dress up and style her tresses. And I know we big brothers — not to mention Daddy — were pretty proud of our little sis as well.
As fortune would have it, Jeanne is the one who took care of Mama and Daddy in their later years. Mama knew she got the better part of this deal.
Yeah, the summer of 1962 was pretty special. Has it really been 56 years?

Larry Penkava, who has written Now and Then since 1994, can still tell a red oak from a white oak.