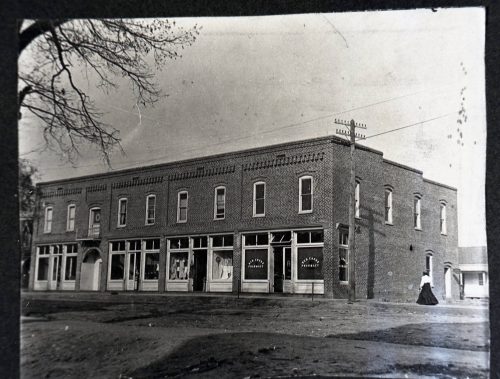 #ThrowbackThursday
Even though this photo, courtesy of the Dr. J.C. Hall family, looks as though it includes one large building, it was actually two. On the left, with the small balcony on the second floor, was the Marks Building that was owned by Whitson Marks. The building on the right was owned by Thomas Crump Hearne. Both of these buildings were constructed in the later-half of 1906 by local contractor Locke A. Moody.
This photo would have been taken between the end of 1906 and mid-1908. The Red Cross Pharmacy, owned by Dr. J.C. Hall that can be seen on the right, is believed to have been merged into his other store, Hall’s Pharmacy, in the summer of 1908. On a side note, the Hearne Building, where Red Cross Pharmacy can be seen in the photo, is still standing. It is the white building that is located between Albemarle’s City Hall and Courthouse Square Park.
The house that can be seen to the far-right side of the photo is the Marks House. The house was constructed prior to 1850 and is the oldest building still standing in Albemarle. The house was restored a number of years ago and is now a part of the Stanly County History Center. It can be found behind the Snuggs House that is located on North Third Street. The History Center offers tours of both the Marks House and Snuggs House. (Contact the History Center at 704-986-3777 for more information.)