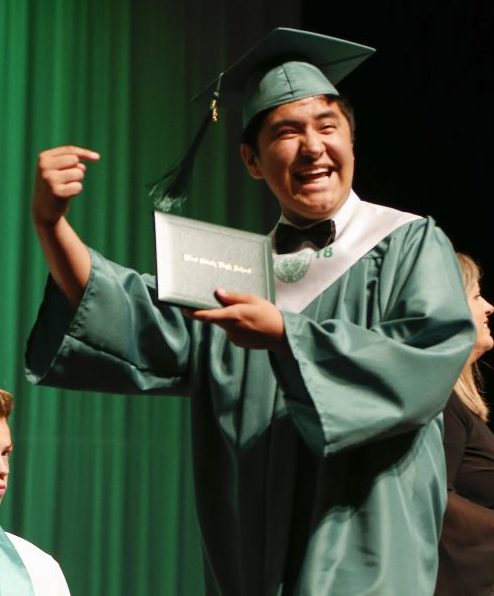 Photos by EARL BRADSHAW Edgar Hernandez shows his excitement upon receiving his diploma Saturday at the Agri-Civic Center.

By Charles Curcio
Sports Editor
A total of 151 students walked across the main stage at the Stanly County Agri-Civic Center on a pristine Saturday morning to receive their diplomas as graduates of the Class of 2018 from West Stanly High School.
Principal Kim Page noted a number of facts about the graduating class before the presentation of diplomas.
Students from West Stanly will attend 24 four-year colleges (33 percent of the class) both in and out of North Carolina, while 46 percent of the class will attend one of five community colleges. The class was awarded $1.79 million in scholarship money.
“Today marks the beginning of days when you will make major decisions and have greater responsibility and independence,” Page said. “Things, stuff, memorabilia, all those things that matter in high school won’t have the same value they once did.”
Many of the graduates received decorative cords to reflect different honors, including Community Blood Center donor (red), Fellowship of Christian Athletes (purple), Future Farmers of America honors (royal blue and gold), National Honor Society (golden yellow), North Carolina Scholars (light blue and dark green), SAC Character Award (white), Skills USA Advanced Studies (teal), Student Council (green, white and black), theatre arts honors (black) and Youth Leadership Stanly (peach).
Before the presentation of diplomas, Heather Copple and Elizabeth Waters performed a duet titled “For Good” to an enthusiastic round of applause from those in attendance.
“This is your life…life isn’t about what happens to you, it’s about your attitude through all circumstances,” Page said.
Stanly County Schools Superintendent Jeff James welcomed the Class of 2018, calling the day “the most important in your lives outside your birth,” adding “always strive for your best.”
Masden Thomas greeted the near-capacity crowd by thanking the school’s administration for helping the graduates to overcome hardships.
He congratulated his fellow graduates and added “the only option is to move forwards. Whatever you do in your future, find happiness and never let anyone stand in your way.”
Noting their lives were about to change, Thomas said “remember this day and celebrate the accomplishments.”
Salutatorian Jaron Price described graduation in his address as “the moment we have all been looking towards since starting four years ago…we have been moving towards this day for the past four years.”
While noting those four years were full of stress, anxiety and sleepless nights, Price said he and the other graduates had “a plethora of support and encouragement” from the school’s faculty and staff.
He thanked parents of the graduates, saying “I know there is not much you wouldn’t do to help your child succeed,” thanking his own parents.
“It’s the small things you do that makes West Stanly High School the place that it is,” Price said.
Price also thanked his fellow classmates “for being there for me and for each other whether in the classroom or on the field…as we graduate today, we begin the next chapter of our lives. It will be different for each and every one of us.”
The West salutatorian finished by saying “I challenge you to find the path to the person you were meant to be and pursue it wholeheartedly.”
Valedictorian Bailey Queen also congratulated his classmates and thanked teachers and staff. He said he felt like in each student’s journey, one person stood out to help with a project late into the night.
“If that’s not love, I don’t know what is,” Queen said. “For that we are grateful.”
Queen said he got to know his classmates through participation in various school activities, finding “it’s a unique class loaded with untapped potential. I am amazed by their unique talent.”
The West valedictorian noted the achievements of the seniors on the Colts’ softball team, improving on last season to reach the fourth round of the state playoffs from “countless hours of work.”
Speaking of a new winning tradition at West Stanly, Queen acknowledged the school’s achievement of winning the Wells Fargo Cup for the second season for the Rocky River Conference for overall athletic excellence.
Other accomplishments for the school in the past academic year included more than 30 trophies and two superior ratings by the Colts’ marching band.
Students from West Stanly also competed nationally in 4-H and Quiz Bowl while the Future Business Leaders of America won eight awards, including three second-place finishes.
“What I ask of you, the graduating class, is to never settle until those feats have been accomplished,” Queen said.
Speaking of the overall diversity of the class, Queen said “look within yourself and make decisions about what will benefit you the most. No one knows you better than you know yourself…a flower does not compete with other flowers; it just blooms.”
While some say they will never come back to Stanly after graduation, Queen noted on a road trip to California for the FBLA competition that he was asked about his hometown.
“I could not find a negative aspect to tell any of them. I realized what I already knew: that West Stanly is a special place…always remember your hometown.”

Trinity McClellan received an honor for All Around Outstanding Character. 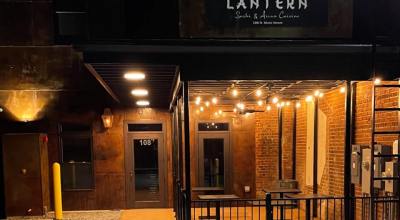