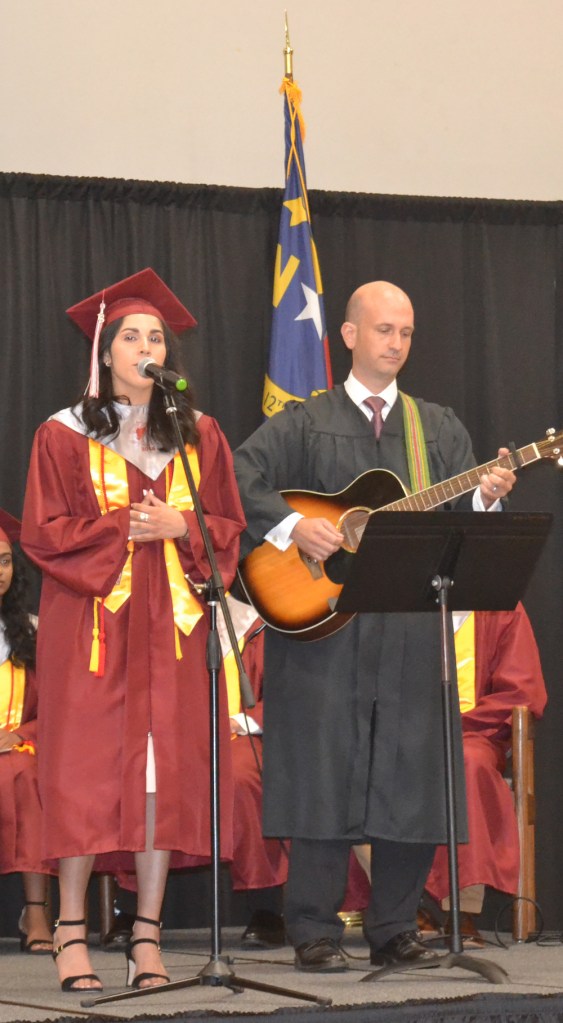 By Ritchie Starnes
News Editor
Gray Stone Day School sent 104 graduates from eight surrounding counties toward life’s next chapter at Friday night’s commencement.
“You’re no longer the boys and girls that entered this school, you are the men and women ready to make your mark on the world,” said U.S. Rep. Richard Hudson, NC-08, who served as this year’s commencement speaker.
A key to their continued success depends on their relationships with other people.
“Relationships depend on the ability to communicate,” Hudson said.
Along with their commitment to succeed and build relationships, the congressman reminded the graduates to stay focused on God. He urged them to refer to their Bible during times of need.
“In troubled times it’s good to keep in mind there are greater causes,” Hudson added.
Three graduating Knights, Kaavya Ravikumar, Thomas S. Perrell and Connor W. Rokos, took turns telling the story for Gray Stone’s Class of 2018, from beginning in August 2014 to Friday’s end, respectively.
They detailed how they matured at the high school, overcoming teenage awkwardness and self-doubt while coming into their confident own.
“We observe the behaviors of others to become who we are,” Perrell told the audience inside the school’s gym.
They also took playful jabs at having their senior year story marred by the arrival of middle schoolers at the unique campus.
But Hudson took everyone back before either school existed. He detailed first seeing the architectural plans for Gray Stone when he then worked for Congressman Robin Hayes. What started as a dream, followed by a blueprint, evolved into an academically elite high school.
“There’s something different about this school. You can feel it,” Hudson said.
Not only are students drawn to the charter school in Misenheimer, but teachers are eager to be a part of a place free of bureaucratic red tape and focused on teaching.
“Gray Stone is a place where students come first,” Hudson added.
Gray Stone ranks as the 11th top high school in North Carolina and 236th in the nation.
Just shy of 100 percent of Gray Stone’s Class of 2018 will attend college as their next phase of adulthood. Some will stay close to home while others take to the road, including a number of students stretching their wings to others parts of the country.
Two graduates, both of highest honors, are studying abroad. Mary Elizabeth Elliott will attend the University of Glasgow in Scotland while Anna Louise Lewis studies at the National University of Ireland at Galway.
Gray Stone’s graduating class garnered $3.2 million in scholarship awards.
Nick Rokos earned the prestigious National Merit Scholarship and Honors College award.
The annual Board of Director’s Scholarship was presented to Josh Irving, who plans to attend the University of North Carolina at Chapel Hill.
On a recommendation by Hudson, Benjamin Robert Ostrander will enter the U.S. Military Academy at West Point.
Above all their achievements, however, Helen Nance, chief administrative officer at Gray Stone, celebrated the graduates for the 7,000 hours of community service performed.
“I’m very proud of the impact you have made in the community while here at Gray Stone,” she said.