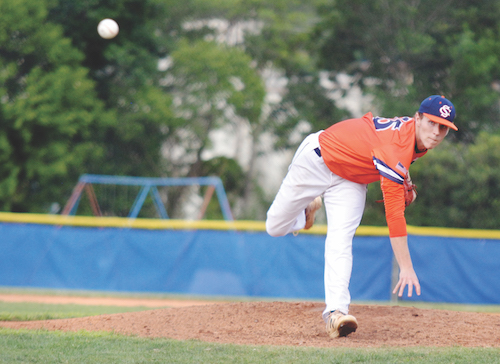 By Charles Curcio
Sports Editor
The confines of Don Montgomery Park have not been friendly for the Stanly County Post 76 baseball team in terms of wins and losses in 2018.
Entering Thursday’s divisional matchup with Mooresville Post 66 at the DMP, Stanly was 2-5 at home having played seven of the team’s first 12 games at home.
After going down early, Post 76 scored seven unanswered runs and evened its divisional record with a one-run win, 7-6.
Tyler Captain gave up one earned run in six innings of work for Stanly (5-8, 1-1 div.) while Jacob Allen pitched a scoreless seventh inning for the save.
All of the offense for Mooresville (1-6, 0-1) came in the top of the second inning off four hits and three Stanly fielding errors. Hunter Dula drove in one run with a double while Dawson Salter added an RBI single as Post 66 took a 6-0 lead.
A four-run inning for Stanly in the third saw Brady Parker drive in one with a double while Seth Grice added an RBI single to center. Kolby Lamp later scored on a wild pitch from starter Bailey Jones to pull Post 76 within two, 6-4.
Stanly took the lead in the bottom of the fourth with three runs off the Mooresville bullpen. Cody Kidd and Jacob Allen both singled, then Parker reached on a error to load the bases.
Will Dagenhart drove Kidd in with an infield single, then Lamp put Stanly up for good with a ground ball up the middle, scoring Allen and Parker to give Stanly the lead, 7-6.
Mooresville threatened in the top of the sixth getting two runners sacrificed over to second and third bases with two outs but Captain got the next batter to ground out to himself on the mound to end the inning.
In the top of the seventh, Allen issued a two-out walk but got the final batter to fly out to Lukas Scott in center to end the game.
“We did a good job late in the game. We booted the ball around in the second inning and gave (Mooresville) some runs but we scratched and clawed. We hit some balls hard and scored enough runs to win,” Stanly head coach Jordan Sells said.
Sells noted the games by Parker and Dagenhart, saying both had huge days, adding the team coming through with runners on base, adding “hopefully we can keep that going.”
Stanly was scheduled to travel to Rowan County (9-2, 2-1) on Friday night for a non-league game. Post 76 returns to the field June 15 for a home game against Kannapolis (3-4).