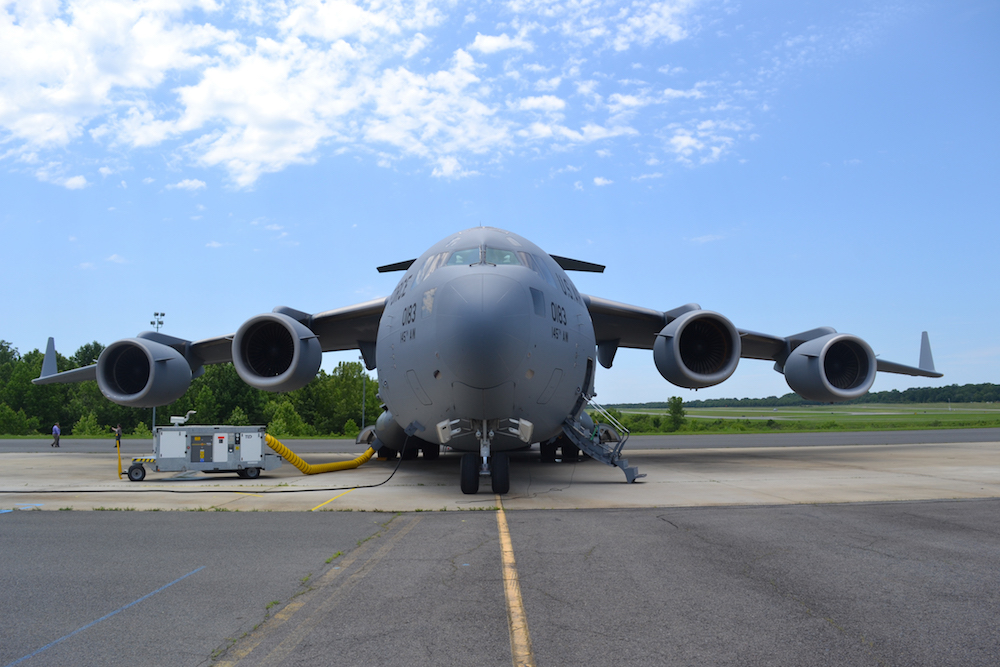 Photo by RITCHIE STARNES/staff The long-awaited arrival of the C-17 was on full display at the Stanly County Airport on June 1 when stakeholders toured the massive aircraft.

By Ritchie Starnes
News Editor
Just like the past 30 years, future development and facility upgrades at the Stanly County Airport will greatly depend on the influence of the N.C. Air National Guard.
As the Air Guard evolves, so does the county’s airport. The 145th Tactical Airlift of the Air National Guard (ANG) is transitioning its use of the C-130 to the C-17, both considered aircraft workhorses with the latter more powerful and versatile. ANG’s transition between aircraft will likely mean Stanly’s airport adapt with more upgrades to accommodate training with the C-17.
“Can we fully support 100 percent of those training requirements today? No, we cannot, but we are working diligently to understand where we are and developing plans to get where we need to be to support training for the Wing as we did with the C130 for many years,” said Ken Swaringen, Stanly County Airport manager.
Training requirements for the C-17 involve assault landings, mid-air refueling, airdrop and ground operations such as backing and combat offload.
“Presently, with some limitations that we are currently working to resolve, the airport could support all but the mid-air refueling,” Swaringen said.
Necessary improvements at the county’s airport include the widening and strengthening of runways and taxiways, strengthening and possibly enlarging the existing Air Guard ramp and adding a Ground Operations pad at the upper end of taxiway.
Runway improvements would allow C-17s to accomplish the maximum day, night and assault landing training via complex tactical approaches and departures, according to the ANG.
Overall costs and a timeframe for completing those upgrades remain unknown at this time. However, efforts are underway to compare provisions for the C-130 with those for the C-17, followed by a cost analysis. It will also include an environmental assessment.
Part of the cost analysis will be a savings analysis for keeping ANG training at the Stanly County airport compared to other sites.
Airport stakeholders got a glimpse of the C-17 when the ANG introduced the aircraft on June 1 at the airport. Along with a regional briefing, stakeholders were able to tour the massive C-17.
U.S. Rep. Richard Hudson, NC-08, was among those to receive a tour and briefing.
“I have a 20-year relationship with the Stanly County Airport and I can remember when they had one little terminal and a shorter runway,” Hudson said. “As district director for Congressman Robin Hayes, I went to board meetings and worked closely with the board and other stakeholders to build it out and expand.”
Because of the airport’s centralized location in the state, topography and its proximity to the ANG base in Charlotte, Stanly County has long been considered fiscally and physically ideal as a training site.
Between the airport’s relationship with the ANG and its strategic location, Stanly’s airport has been chosen as the base for a N.C. Emergency Training Center, only the second such facility in the nation. An association between the ANG and the Office of State Fire Marshal contributed to the decision.
Stanly’s airport was chosen as the emergency training site for several reasons. It:
• includes a burn building, confined space, trench rescue and structural collapse training facility needed for this type of specialized training;
• is centrally located and sits near various types of terrain needed for training — lakes, the Rocky River, Morrow Mountain State Park and the Uwharrie National Forest;
• has proximity to a FEMA warehouse; and
• is near the state’s largest city, Charlotte.
Stanly’s airport, along with its nearly 1,000 acres, is poised for new growth to accommodate the emergency training center and the ANG’s C-17.
Hudson was also briefed on the State Emergency Training Center, the Wing’s C-17 conversion and its overall footprint on Stanly County.
The briefing also highlighted funding needs aimed to improve and build facilities and training infrastructure such as classrooms and firefighter live-burn training, Hudson said.
“I know this airport and what an important asset it is to Stanly County and the region, and I see the potential for the future,” he added. “I’ll continue to work closely with Stanly County, the North Carolina Air National Guard, the Office of State Fire Marshal and stakeholders to maximize that potential and ensure the Stanly County Airport and the training facility has the resources and support necessary.”
In the General Assembly’s recently approved 2018-19 budget, $100,000 was appropriated toward broadband infrastructure for the emergency training center. Although other infrastructure like utilities, water, sewer and natural gas are available at the site, limited broadband connectivity has been a chronic issue for the airport.
“I understand that probably will be handled through the State Fire Marshal’s office as part of the initial up-fit for the N.C. Emergency Training Center,” Swaringen said.
Another potential area for growth at the airport is as a hub for the research and development of UAS/UAV (drone) type technologies. Stanly County has been participating for several years in state level planning meetings associated with the further development of a UAS/UAV research corridor, according to County Manager Andy Lucas.

U.S. Rep. Richard Hudson, NC-08, tals with Lt. Col. Jeremy R. Reich of the North Carolina Air National Guard inside the cockpit of the new C17 during a tour and briefing Jan. 1 at the Stanly County Airport. The C17 is replacing the C130.