Bill calls for more scrutiny of movies shown in school 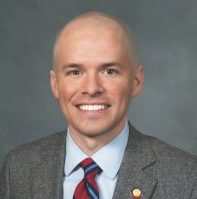 By Ritchie Starnes
News Editor
Two weeks after North Carolina educators mounted a protest in Raleigh, a Stanly County legislator has again stoked their angst with proposed legislation.
N.C. House Rep. Justin Burr sponsored House Bill 1079, which would require all statewide school districts and charter schools to report to the legislature which movies were shown during instructional time this school year from November through January and from April through June. Schools would also be required to say when the movies were shown, the amount of time they were shown and the instructional purpose for viewing them.
Monthly totals would also be required on the number and percentage of classrooms viewing a movie and the number and percentage of instructional hours spent viewing movies. The bill appropriates $100,000 to the N.C. Department of Public Instruction so the data can be compiled and then presented to state lawmakers by Nov. 15.
“Classroom instructional time is limited and valuable,” Burr said via email. “Unless we are talking about a film class, I do not believe it is appropriate to show non-documentary (Hollywood style) movies during those valuable classroom hours that a student is supposed to be learning.
“The point of my proposed bill is to examine if we have a problem with students watching too many movies during the classroom instructional period,” he continued. “I don’t think this is an issue in every single classroom, but I think it is a problem in a number of schools throughout our state.”
In recent days, parents and teachers have informed the Stanly County Republican that an inordinate number of movies with questionable educational value has been shown in classrooms, Burr said. Movies like “Finding Nemo,” “The Patriot,” “The Crucible,” “Tora Tora Tora,” “Midway,” “Thirteen Days,” “Fail Safe,” “All the President’s Men,” “Saving Private Ryan,” “Last of the Mohicans,” “Hidden Figures” and “Forrest Gump” were among those shown to students during what should have been instructional time.
“Again, not every teacher is using their classroom instructional time to show movies, but if they are, the state should be able to examine and determine if it is an appropriate use of the instructional period and the taxpayers’ money which funds the schools,” Burr said.
Stanly County Schools has a policy (3189) governing the use of media such as movies, although it allows for a broad interpretation.
However, schools have specific procedures in place to prevent non-educational use of videos, according to Superintendent Jeff James.
James said he’s not aware of any particular abuse of the district’s policy.
“With a staff of over 1,300, I am sure there are incidents that occur where administration could question this,” James said. “Is it rampant? Not to my knowledge. However, I do believe the majority of our teachers strive to maintain the effective use of instructional media and use it as tool to supplement learning like any other tool.”
James suspects the problem may stem from that period of the school year when teachers are trying to balance their duties after students have completed annual testing.
“I think the spirit of the bill is to preserve instructional time and to effectively use movies or movie clips to support the effort of great instruction,” James said. “The issue looks different when you are the principal, teacher, or staff that has hundreds of students in a building after the EOG or EOC is completed. Students at this point know the year is over and keeping them focused on instruction becomes much more difficult. The bigger issue I feel is the need to have calendar flexibility so we can end the school year when we finish testing. I think the students, staff and parents would agree with this idea.”
The North Carolina Association of Educators (NCAE) opposes the legislation.
“There is a whole list of needs in our public schools that can use $100,000 instead of a state report about movies in schools,” said Mark Jewel, president of NCAE. “This bill should end up on the cutting room floor where it belongs.”
Melissa Belk, a teacher at Central Elementary School and the district’s NCAE representative, agreed with James that scheduling during testing often poses conflicts.
“Many teachers, that I know, are scratching their heads and are wondering why Mr. Burr’s valuable time in office is being spent on the micromanagement of our schools,” Belk said. “I can only speak for Stanly County Schools and the fact that we already have procedures in place for showing supplemental videos.
“I do feel our local LEA needs to be able to control its own testing calendar because once these kids test and they know report cards are final, they are done,” she added.
House Bill 1079 was not Burr’s only educational legislation introduced last week. He also filed HB 1078, which would establish the Educational Field Trips Grant Program through the superintendent of public instruction.
The program would provide a matching grant for the schools to provide off-site educational enrichment experiences to students. Grant funds would be used for costs associated with field trips to state parks and forests, state aquariums, the state zoo, the state capital, the federal capital and historic sites, such as Mount Vernon. If approved, the bill would appropriate $10 million in recurring funds to the Educational Field Trips Grant Program.