NBA Finals another highlight of side(line) career of figures 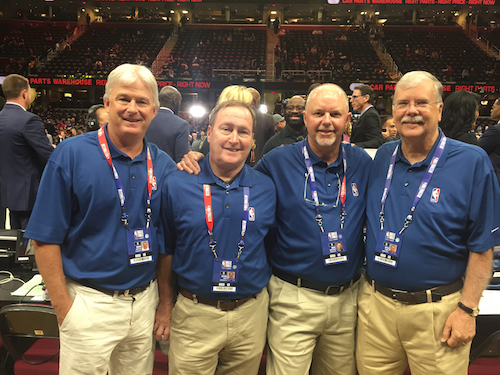 CONTRIBUTED The NBA decided to use a neutral scorer’s table for the finals this year, which turned out great for Stanly County resident Mike Harwood. From left: Mark Arcilesi, Kevin Earp, Mike Harwood and Rich Ward.

By B.J. Drye
Editor
“If I could be like Mike.”
The quote from a famous Gatorade commercial from 1991 could fit a local Mike this time instead of Michael Jordan.
Mike Harwood has a seat many basketball fans would love, but the seat received an upgrade Wednesday night and Friday night.
Harwood was part of the scoring crew at the NBA Finals games in Cleveland between the Golden State Warriors and the Cleveland Cavaliers.
“This year the NBA chose to bring a neutral scorer’s table in for the finals,” Harwood said from his hotel in Cleveland Thursday.
It was the morning after the Warriors went up 3-0 in the championship series. The two teams have squared off in the finals the three previous seasons as well, with the Warriors winning in 2015 and 2017 and the Cavaliers in 2016.
“The atmosphere was crazy,” Harwood said of Wednesday’s Game 3. “These Cleveland fans are pretty passionate.
“I’ve been doing it so long, it’s kind of like riding a bike,” Harwood added. “Although it was kind of loud last night.”
Harwood, who recorded stats for the Charlotte Hornets versus Los Angeles Clippers in two exhibition games in China and during the NCAA Final Four in Charlotte in 1994, said the experience of an NBA Finals’ game is unmatched.
Harwood said professional golfer Bubba Watson was sitting a few seats down from him and a few of MLB’s Cleveland Indians were spotted. He had breakfast Thursday morning with Mark Price, the Georgia Tech star who played most of his professional basketball career in Cleveland.
“You get to see a lot of celebrities,” Harwood said.
The Warriors were to play the Cavaliers in Game 4 Friday, with the reigning champions hoping to sweep the series. If the series were to reach a necessary Game 6, Harwood would be back in Cleveland Thursday for another stat recording session.
Since 1991, Harwood has been passionate about his role with the NBA team in Charlotte as part of the statistics crew. Harwood is the official scorer and works directly with the officials.
“The main thing that’s important for what I do is make sure I keep the correct player fouls, correct timeouts,” Harwood said, adding it can get crazy such as when there is a question on whether a shot was 2-pointer or a 3-pointer, depending on how close a player was toeing the line.
Harwood explained that the NBA asked referees to narrow down which crews they would like for the championship series.
“All of us have over 20 years experience at this,” he said of the stat team. “We have a good relationship with the referees. When they come to Charlotte, they know we’re going to pay attention and do a good job.”
Harwood, who is senior vice president for commercial lending and investment advisory at Uwharrie Bank in Locust, found a knack for numbers earlier than 1991 — and he said he owes it and his career in banking to one person: Mark DeMarcus.
“It all started in 1984 when I was a student at UNC Charlotte,” Harwood said.
Harwood said stats were all written by hand. One night at a game DeMarcus, one of Harwood’s fraternity brothers, came to him in the crowd and asked if he could keep rebounds since their rebounds stat person did not show up.
After that first game, they kept asking him to keep rebounds.
“Before I knew it I was doing the whole stat thing eventually,” he said.
He said he has used this experience as a teaching tool for his children, since DeMarcus also led him to use first job in banking at Wachovia in Albemarle, now a Wells Fargo branch.
“That one dude has been a huge influence on what I do these days. It’s kind of neat,” Harwood said. “Try not to have any more enemies than you can help because you never know — you never know what influence someone will have on you.”