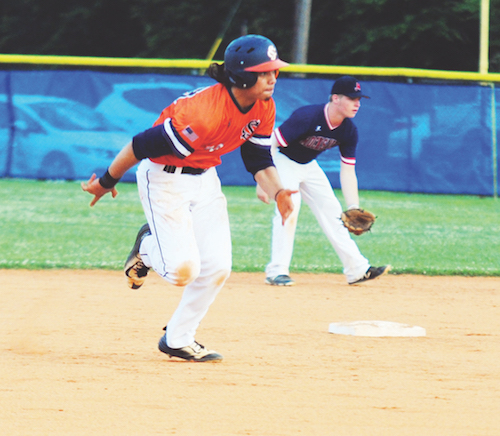 Stanly County's Lukas Scott takes off for third base during a Post 76's home game this week.

By Charles Curcio
Sports Editor
Heavy rains last Saturday delayed the opening divisional game for Stanly County Post 76’s baseball team to Wednesday, where Stanly hosted Mocksville Post 54.
Trailing for the majority of the game, Stanly scored mulitple runs in the final two innings but the late surge came up one run short in a 7-6 loss.
David Highman was the winning pitcher Wednesday going six innings for Mocksville (8-3, 1-0 div.) allowing two earned runs on eight hits with three walks and six strikeouts. Ryan Tulbert picked up the save getting two outs in the seventh.
Jordan Howard took the loss for Stanly (4-8, 0-1) giving up five earned runs on four hits with four walks issued and three strikeouts.
Mocksville catcher Carter Foster put the visitors up in the top of the first inning with a two-run home run with two outs after Nick Ward drew a walk.
Post 76 left nine runners on base in the game, leaving the bases loaded three different times. The first of those opportunities came in the bottom of the third when Stanly loaded the bases with no outs. Colton Austin, Hunter Sells and Kolby Lamp all singled for Stanly but a strikeout and a 4-3 double play by Blake Winebarger ended the threat.
Stanly turned a double play in the top of the fourth inning erasing a leadoff single, then loaded the bases in the bottom of the inning with two outs. Lukas Scott singled then Cody Kidd and Austin walked; Highman struck out the next pitcher ending the inning.
Will Dagenhart laid a one-out bunt single down for Stanly in the bottom of the fifth but Mocksville turned another double play, this one started by Highman on the mound.
Mocksville built on its lead in the top of the sixth inning with three runs off Post 76. Two singles and a walk loaded the bases with one out, then a wild pitch and a passed ball plated two runs.
A.D. McRae took over on the mound for Stanly and allowed an RBI groundout but got the next batter to fly out to left as Mocksville increased its lead to 5-0.
Kidd put Stanly on the board in the bottom of the sixth with a two-run double to center field. He later scored on an Austin RBI single to right to get Post 76 within two, 5-3.
Mocksville added what proved to be two critical insurance runs in the seventh on a Martin RBI double and a Ward RBI single, adding to the Post 54 lead, 7-3.
Trailing by four, Stanly got the last inning started by loading the bases with no outs on singles by Lamp and Dagenhart and a walk to pinch hitter Jake Allen. Seth Grice drove Lamp in with a groundout to first, then Pinion added two RBIs with a single to center field.
Pinion moved to third on a Scott double, then Kidd was intentionally walked to load the bases. Tulbert then struck out Austin and got Sells to ground into a fielder’s choice to end the game.
Stanly head coach Jordan Sells talked about his team needing to cash in on scoring chances.
“I need guys that can come through in those situations…there are certain kinds of baseball players who eat, sleep and breathe that situation. They dream about it at night,” Sells said. “We have to have a guy or nine guys that will come through in that situation. We just didn’t have it tonight.”
Stanly’s coach added his team needs to start more quickly offensively in games and get better at-bats.
Regarding Howard’s efforts on the mound, Sells said “he did a good job settling into his start…he just left a ball up to a good hitter. After that, he settled in and has been one of our best so far.”