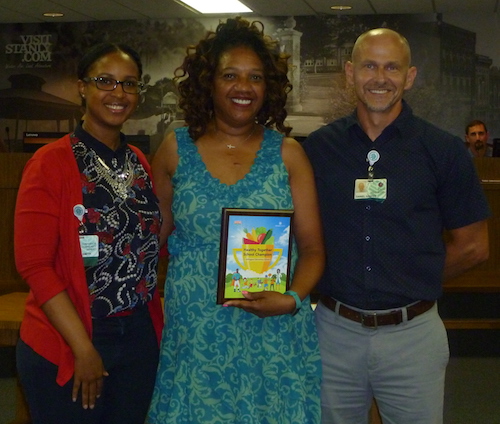 Staff members
of the year

“Every year, our schools select three categories of staff to be recognized as the spotlight staff member of the year that has exceeded expectations,” Calvert said, adding that teachers of the year will be honored in September.
Jennifer Huneycutt, principal of West Stanly Middle School, introduced Mandy Efird as the Certified Staff Member of the Year.
“This lady is the most selfless and hardest-working person that I know,” Huneycutt said. “She goes over and beyond in her position. She is dedicated and is always supportive of our students, staff and school community. She is positive and patient. She is a leader. No matter how stressed and difficult the day may have been, she always has a smile on her face and never complains. She possesses every quality needed to be an outstanding administrator. She sees the best in everyone and she believes in everyone.”
Huneycutt said that more than 50 percent of the staff at West Stanly voted for Efird, with staff members calling her “calm,” “genuine” and “caring.”
Kelly Dombrowski, principal of Oakboro Choice STEM School, told the board about Dorothy Jackson, the Classified Staff Member of the Year.
“Her colleagues use words like ‘professional,’ ‘endearing,’ ‘hilarious’ and ‘ever-versatile,’ ” Dombrowski said.
Jackson told Dombrowski she could have already retired but wanted to remain in the system another year to help.
“She has worked tirelessly and done so much to make sure that things and children are taken care of,” Dombrowski said. “She does that to make sure we are taken care of, and takes on any duty at Oakboro. She can give you a giant bear hug and quickly cut her eyes at you to make you get back in line in a hot, skinny minute. The kids love her, and it is evident that she loves them in all that she does every day.”
Both Efird and Jackson were presented with a certificate by Calvert and James.

Brittany Smith and Daniel Harkey, representatives of Atrium Health (Carolinas HealthCare System), honored Shelby Lawson, principal of Millingport Elementary School, as the Healthy Together School Champion.
Smith leads Healthy Together in elementary schools, and Harkey helped to begin the program in Millingport.
The Healthy Together 5-2-1-0 program at Millingport was the first introduced in Stanly County, according to a press release from Atrium Health. Participants learn that they should consume five servings of fruits and vegetables a day, have two hours or fewer of recreational screen time, have at least one hour of physical activity per day and consume no sugary drinks.
“[Lawson] has been a tremendous champion for the program,” Smith said. “She has even taken the program to heart.”
Lawson had “tremendous” success using the program in her own life, Smith said.
The release from Atrium noted Lawson “lost a considerable amount of weight since starting the 5-2-1-0 program and is now leading a healthier, active lifestyle, participating in 5Ks and faculty workouts.”

Calvert also introduced teachers who have completed their third year in the profession.
“When a teacher enters the teaching field, they are initially given what we call a Standard Professional I license,” she said. “That license is good for three years, and it’s the beginning teacher license. And although they’re allowed to teach for those three years, there are requirements that they have to meet.
“Some of them have to complete coursework,” she added. “Some of them have to complete state or national exams, and then they all have to attend professional development that is provided just for our beginning teachers. So to get to this point in their third year of teaching, to have hung in there for those three years, they have a lot thrown at them. This is quite a celebration for those folks.”
The teachers honored were: Brooke Boucher, Alexander Bravo, Dana Burleson, Randy Dunbar, Hannah Griffin, Andria Harris, Corina Hill, Chadwick Horn, Jamie Hraczo, Wendy Lowder, Kristie McCowan, Phillis McSwain, Rebecca Nelson, Kandyce Norton, Natalee Rogers, Jordan Sells, Suzanne Shields, Angelina Smith, Cameron Speights, Crystal Tucker, Valerie White and Shannon Whitley.