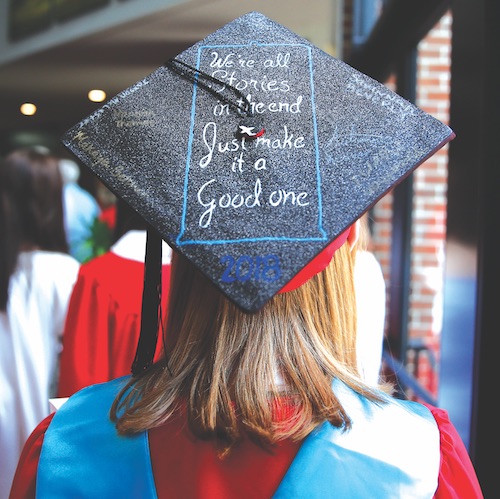 By Charles Curcio
Sports Editor
On Saturday afternoon at the Stanly County Agri-Civic Center, 103 South Stanly High School students received their diplomas as a part of commencement exercises for the 2017-18 academic year.
Student body president Jamie Crocker greeted the hundreds in attendance, saying it is crazy to think the last four years have come to a close.
She also shared a quote from Mark Twain, who said, “Twenty years from now, you will be more disappointed by the things you didn’t do than by the things you did do.”
Crocker led everyone in attendance in the Pledge of Allegiance, then the trio of Makayla Belcher, Raegan Crump and Logan Johnson sang the national anthem.
In his comments to the graduating class, Stanly County Schools Superintendent Jeff James called graduation “a right of passage opening many doors for the journey of your life.”
“You certainly have enhanced the reputation of your school,” James said.
“Today you have reached a pinnacle in your life; it is at this point where you decide, ‘What’s next?’ I challenge you by putting down your smartphone and every once in a while directly connecting to the world for inspiration. While you have learned to Google everything to answer a test question or find a date, you cannot Google the passion that resides in each and every one of your hearts.”
Using a reference from “The Road Not Traveled” by Robert Frost, James encouraged graduates “to not be afraid to take the road more difficult to travel as this can make all the difference.”
“I hope the road you choose…is fulfilling and brings value to the world,” James said, adding he hoped graduates would “be courageous and stand up for what is right. Be kind and respective and stay true to yourself and your commitments.”
James then gave five pieces of advice to the Class of 2018: never take less when you can do more, always seek first to understand, live your life from the heart, be a positive influence on all those around you and never forget those who have helped you along the way.”
Class vice president Katelyn Purdy introduced the two student speakers for the day, the valedictorian and salutatorian.
Salutatorian Ty Smith said as he pondered the future, “it doesn’t matter where you come from, but where you are going.”
Saying he and his classmates are on the fast track to the future, Smith said “I believe the Class of 2018 can continue to move forward because we are curious.”
Smith also said he and classmates should have “an attitude of gratitude” for all those who helped them get to this point in life.
Valedictorian Qing Xi Li introduced her comments by saying she was unsure at first what to say in regards to an introduction, but looked up several random quotes online with which to start.
“According to my parents, I haven’t walked as many steps and ate as much rice like they did to be considered wise yet,” Li said.
Deciding to start with a pun, she said “isn’t it quite useless to pick up a pencil and write without a point?”
She continued to amuse the crowd in attendance by saying she was”trying to minimize the frequency of cardiovascular palpitation and the involuntary exudation of human perspiration caused by cortisol’s release of glucose into the bloodstream while maintaining an eloquent presentation of oral art.”
Or to put it more plainly, “I’m trying to appear as calm as I could be even thought my heart is beating faster than the rate of global warming is right now.”
What was fast though were the four years she and her classmates spent at South Stanly, Li said.
“We are the class of 2018, the class where miracles expand,” Li said.
The South valedictorian likened life to a test, saying “we can only do so much in a limited time, but we can also do a lot in a limited time.”
Encountering problems is just part of life, Li said, adding “ we are not made to know everything, just enough. Enough to let us appreciate our knowledge and enough for us to use the phrase ‘I tried my best’ with great sincerity, great honesty and great confidence.”
Speaking about diversity, Li said “we all came from different places and different backgrounds,” noting her Chinese background.
However, she asked if that made her different, to which she replied “in some aspects, yes, because no one is alike but other than that I’m no different than the rest of you, onstage and downstage. We all share a compassionate heart willing to fill the world with acts of kindness.”
She encouraged the Class of 2018 with the words of Dutch scholar Erasmus, who said “give light and the darkness will disappear of itself,” adding her own words, “let’s shower this place with brightness and rays of hope.”
After the presentation of diplomas by South Stanly principal Tanya Crisco, assistant principal Megan Todd and teacher of the year Ashley Carter, Crisco pronounced the Class of 2018 as having officially graduated.