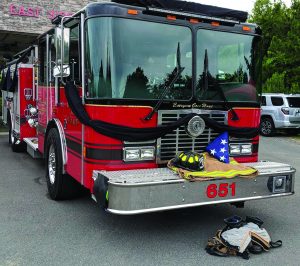 An East Side fire engine displays the turnout gear of the late Dakota Ross Snavely.

What began as a tough week for members of the East Side Volunteer Fire Department, gets harder today.
East Side firefighters are braced to bury one of their own Saturday. They’ve been mourning the death of 17-year-old Dakota Ross Snavely since he was killed Sunday while responding to a service call. Some accompanied the Snavely family to Raleigh this week to retrieve Dakota’s body from the State Office of the Chief Medical Examiner in preparation of the funeral.
“Our members are hurting,” said Andy Efird, chief at East Side. “I’m telling our members to cry. In fact, I’m worried if they don’t.”
Grief counselors were on hand at East Side Monday night to help the tight-knit fraternity cope. East Side has about 35 active members, including four father and son tandem firefighters like Dakota and his dad, Jimmy Ross Snavely, a captain with the department.
Fire departments throughout the county and across the state have been aiding East Side to ensure the fire district has coverage while Dakota’s fire family grieves.
Some of those departments that jumped in to help, like Harrisburg and Salisbury, know firsthand the pain of a fallen firefighter. They, too, have suffered the fatality of a firefighter in the line of duty.
The Office of the State Fire Marshal sent a two-man team to East Side to help coordinate fire coverage during this time.
“The department is numb to what’s going on because they’ve lost a brother,” said Brian Taylor, assistant state fire marshal.
“The main thing is being able to talk. Let’s get through this together and not by yourself,” he added about firefighters coping with Dakota’s loss.
Dakota was killed Sunday evening while responding to a water rescue at Morrow Mountain State Park (MMSP). He was traveling northbound on N.C. Highway 205 near Oakboro when a load fell from a southbound tractor trailer and struck Dakota’s vehicle. He was pronounced dead at the scene.
While East Side responded to MMSP for the water rescue, Oakboro responded first to Dakota’s fatal wreck.
When Dakota did not respond to MMSP, his father Jimmy, an East Side member since he was 16 years old, decided to search for him.
“He was expecting Dakota,” Efird said. “Jimmy was asking ‘have you seen Dakota?’ He kept calling him on his cellphone.”
Jimmy Snavely then drove the route his son would have taken from Oakboro to MMSP until reaching the fatal wreckage.
“Our goal right now is taking care of Jimmy Snavely and his family,” Efird said.
Efird, who also has a son on the active roster at East Side, said Jimmy is as much a friend as a co-firefighter. He said Jimmy was part of his wedding party 27 years ago.
“It’s been the hardest week that I’ve ever had,” Efird said. “I don’t know how to handle this. This is all new.”
Darla Snavely said her brother Jimmy has been unable to sleep and eat in the wake of Dakota’s death.
“My brother has been through so much this year, first the wreck that killed the 10-year-old girl (Micah Bryant) followed by her mother dying of a heart attack and now Dakota,” Darla said.
Last January, Jimmy Snavely, then an employee with Albemarle Correctional Institute, collided with a car that killed Bryant and critically injured her brother on Anderson Grove Church Road. He has since been charged with misdemeanor death by vehicle.
Tanisha Bryant, Micah’s surviving mother, suffered a fatal heart attack last month.
Dakota often stayed with his aunt Darla.
“He wanted to be just like his daddy,” she added, describing her nephew as “outdoorsy,” someone who loved to hunt and fish.
Efird said Dakota was serious about his commitment to East Side, joining the department at 15.
“He was like a sponge,” Efird said. “He wanted to know everything about the fire service. He was always asking questions. Young people like that are hard to come by.”
Firefighters are a unique breed, Efird explained. Their fraternity is bonded by a commitment to serve.
Nowhere was that camaraderie on display more than Wednesday’s drive to and from Raleigh. Along the route, more than 45 fire departments and various law enforcement agencies greeted them with banners hanging at overpasses or from ladder trucks. First responders greeted them with salutes at different points along the highway. Some offered them a resting spot before making the return leg to Stanly County.
“They don’t have to know Dakota to know Dakota. They know he was a firefighter,” Efird said.
Dakota’s death marks the second North Carolina firefighter to die in the line of duty this year. Two firefighters were killed in the line of duty last year. Eleven died the year before, Taylor said.
Capt. James “Truck” Hicks, 44, of the N.C. Air National Guard, was the last firefighter to die in the line of duty in Stanly County. In July 2015, Hicks suffered a fatal heart attack at the guard’s fire station at the airport hours after battling a fire on Kemp Road.
Last year, Center Rural firefighter Chris Coone was killed in a crash in Norwood. Although Coone’s death was not related to his duties as a firefighter, the first responders on the scene came from Center Rural.
Dakota’s funeral is scheduled at 11 a.m. Saturday at Anderson Grove Church in Albemarle.
“It’s fitting for the funeral to be at Anderson Grove because it had a big part in organizing this fire department,” Efird said.
Burial will follow at the Stanly Gardens of Memory.
East Side plans to honor its fallen member with full honors. An original 1959 fire engine draped in a black sash will transport the casket containing Dakota’s body from the church to the cemetery.
East Side VFD is named after its last firefighter to die in the line of duty. In 1965, Grady L. Mills was killed in a crash while responding to a call. A plaque honoring Mills is attached to the fire station, built on property donated by his wife.