Seen in the rain 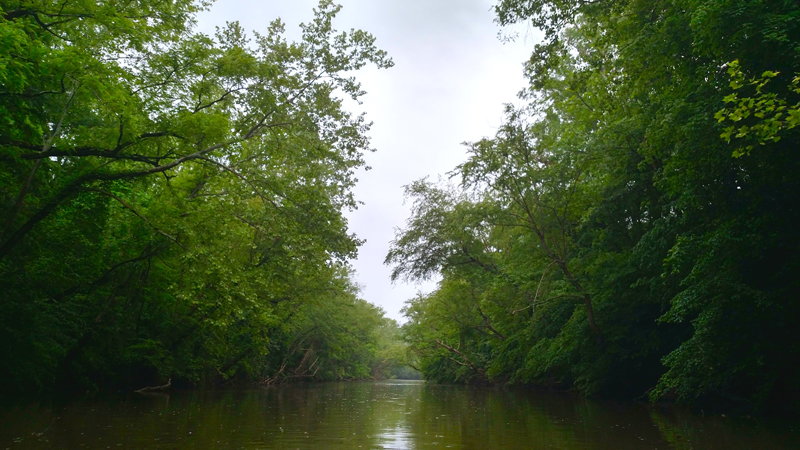 A gentle rain falls on the Uwharrie River during the Three Rivers Kayak and Canoe race sponsored by the LandTrust of Central N.C. last month. An unusually wet spring has the normally shallow Uwharrie rushing on a regular basis this year.

Rain up here is different than out on the coast.

Out there, you see, the rain has nowhere to go. When it falls, it just sits. Lays about in flat puddles. Lingers in lazy runoff ditches for days.

But up here, the water can’t hold still. Once it’s done falling from the sky, it keeps running. Down hills, through ditches, to tiny creekbeds where it makes its fun tumbling off rocks.

It makes for different floods, too.

Get out east of Rocky Mount and a flood is no rushing thing. Rather, it creeps doggedly up river banks. Inches over the bounds of bloated swamps. Swallows slowly all that lies low.

But up here, floods come and go like freight trains. Charging through with a rush and tumble, no way to get them to stop. Their swift passage charges over river banks, crashes across roads.

But recently I’ve seen something the same in them, too.

It wasn’t exactly a happy realization at first. As I read about the year’s first tropical system, Alberto, I couldn’t help but notice the way weather has crushed people across our state.

Just as the rush of mountain floods washed away homes in Polk and Transylvania counties this spring, the march of rising waters strangled Robeson and Cumberland counties when Hurricane Matthew struck last year.

Having lived both here and there, it was a sobering thought. That no one gets away from the literal storms in life.
Still in the past couple of weeks, I’ve seen the beauty in the rain, too.

A couple of weeks back, I was out on the Uwharrie River for a kayak and canoe race sponsored by the LandTrust for Central North Carolina. (It’s a three part series, so if you’re into paddling, check it out on their website.)

Unsurprisingly with the wet spring we’re having, it was raining off and on throughout the race. But rather than making anyone miserable, the weather turned the world to magic. Breathed a coolness into the air, set the river flowing fast, sent droplets plinking at the water like plucked harp strings.

I think my favorite moment was about halfway down. There’s this section of river where the trees on both sides of the Uwharrie are so big that their branches met overhead. Like a great green tunnel. As I paddled into it, the rain didn’t fall on me directly, but instead tricked down in hand-me-down drops, echoing all around like water in a subterranean cavern.

The storm turned beautiful out on the coast, too.

I got to see it over the Memorial Day weekend. While visiting my parents in Currituck County, we launched out into Tulls Bay on my dad’s boat. (He never needs much excuse to get out there.)

So as we went out, we were among the first to see Alberto’s fingers stretching across the sky. Piling up in grey-blue mounds over the marsh grasses on the far side of the water.

We went out swimming anyways. The rain hadn’t started yet, we reasoned, and neither had the thunder. Besides, rather than terrifying anyone, the ominous dark seemed to bring everything to life. Made the spring-green leaves pop out like jewels against the gray, turned the breeze silken with damp, shadowed the water to dark and mysterious shades. We stayed out until the first raindrops began to fall.

And as we wound our way back out of the marsh and back across the bay, I couldn’t help but think that this is something we all share, too.

That when those literal storms in life come, it’s not just destruction we see, but the wonder in the wild darkness and the blessing on the building breeze.