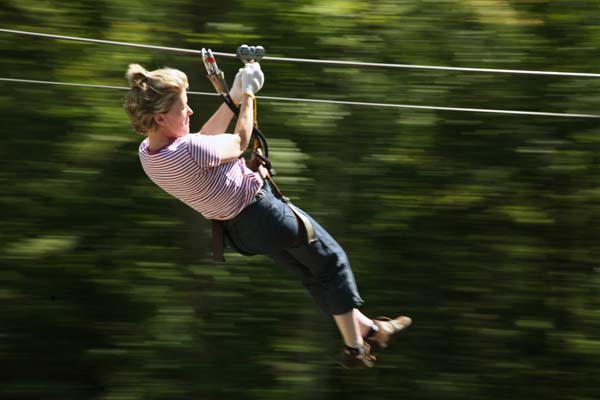 Contributed Carolina Treetop Challenge wants to add a course like this in Rock Creek Park in Albemarle. The City Council is considering the project.

A new form of recreational tourism may be on its way to Stanly County.
Carolina Treetop Challenge, LLC is looking to invest close to $800,000 into an aerial park — or outdoor facility with ropes courses and zip-lines — near downtown Albemarle over the next couple of years.

At the city council’s last meeting, business owners and officials discussed an incentive agreement that would allow Carolina Treetop to lease about 10 acres at Rock Creek Park for that purpose.

According to the document, the city would rent out the southern section of the park (pretty much everything south of the swimming pool except the greenway, which would remain open to the public) in exchange for a certain percentage of the business’ profits and a guaranteed investment into the park.

Studies performed by the city and the county suggest Stanly is ideal for recreational tourism, so several economic development groups have been working together to recruit such businesses.

“They have been an outstanding group to work with,” said Ken White, who is slated to be the operational manager for Carolina Treetop. “Everything has been outstanding… this is a beautiful little city and it just feels right to us.”

He and fiance Laura Hall originally stumbled upon Albemarle by accident, they added. After eating lunch nearby, they stopped to walk on the greenway at Rock Creek Park and as they did so, they couldn’t help but notice how ideal the forested area was for an aerial park — something the family had wanted to open for a while.

Between that, the proximity to Morrow Mountain State Park and the helpfulness of local officials, the location has proved ideal for their needs, the family decided.

“It’s not in direct competition with similar businesses,” said Laura Hall, noting the closest facility with an aerial park is the Whitewater Center on the far side of Charlotte.

In addition, Albemarle is within a day’s drive of every major city in the region, she noted.
“It’s the perfect location,” Laura Hall said.

Data gathered for the incentive agreement indicates an aerial park in the Stanly area could expect to attract about 14,000 visitors in its first year and as much as 30,000 a year once firmly established.

In addition, Laura Hall — who would be Carolina Treetop’s marketing director — would like to work with local groups like the Special Olympics, Boy Scouts, Girl Scouts and other children’s groups to host special events and fundraisers.

“On a personal level, that’s one of the things that excites me, getting to do those events that bring kids and families out,” Laura Hall said. “That’s what I really think is so awesome about these outdoor activities. You’re getting families out, you’re getting kids off their computers, you’re getting them outside with something that’s really fun.”

Councilors agreed that the business would be a great fit for the area. But they did voice some hesitations over safety.

“I’ll be honest,” Councilwoman Martha Sue Hall said. “Personally, I really had a problem with this the first time I heard about it because of the liability to the city.”

Since the aerial park would be on public property, the city might face legal claims if people were injured, councilors detailed.

“What safety measures will be in place?” Councilman Bill Aldridge asked.

White and Laura Hall said two of the nation’s most experienced aerial park developers would help in that area. Outplay Adventures — a pioneer in U.S. aerial parks that operates seven locations across the nation — and Treego Parks — an international designer of rope courses — are working with them on this project, White and Hall said.

Treego would install the course. The company uses arborists to check every tree on its courses and then sends out staff members to perform safety inspections throughout the first year of operation.

Also, before opening, Outdoor Adventures trains on-site staff on the proper use of equipment and safe course management. Treego teaches staff how to inspect and maintain the ropes courses for themselves.

“And after that I plan to go through additional training with (the Association for Challenge Course Technology),” White said.

Insurance and waivers offset any additional liability posed to the city, they added.

“It’s in our best interest to keep everyone safe,” Laura Hall said.

With those questions addressed, most councilors voiced vocal support for the business.

However, since the incentive agreement is not quite finalized, the council could not vote on it.

Instead, a public hearing on the matter will be extended to 6 p.m. June 25. At that time, anyone wishing to comment on the incentive agreement may do so. Afterwards, the city will vote on the matter.

Carolina Treetop Challenge, LLC is looking to invest in an aerial park on about 10 acres at Rock Creek Park.

Contributed
Ropes courses and scenes like these could soon fill a portion of Rock Creek Park. Albemarle City Council will have continue a public hearing on the matter at 7 p.m. June 25.