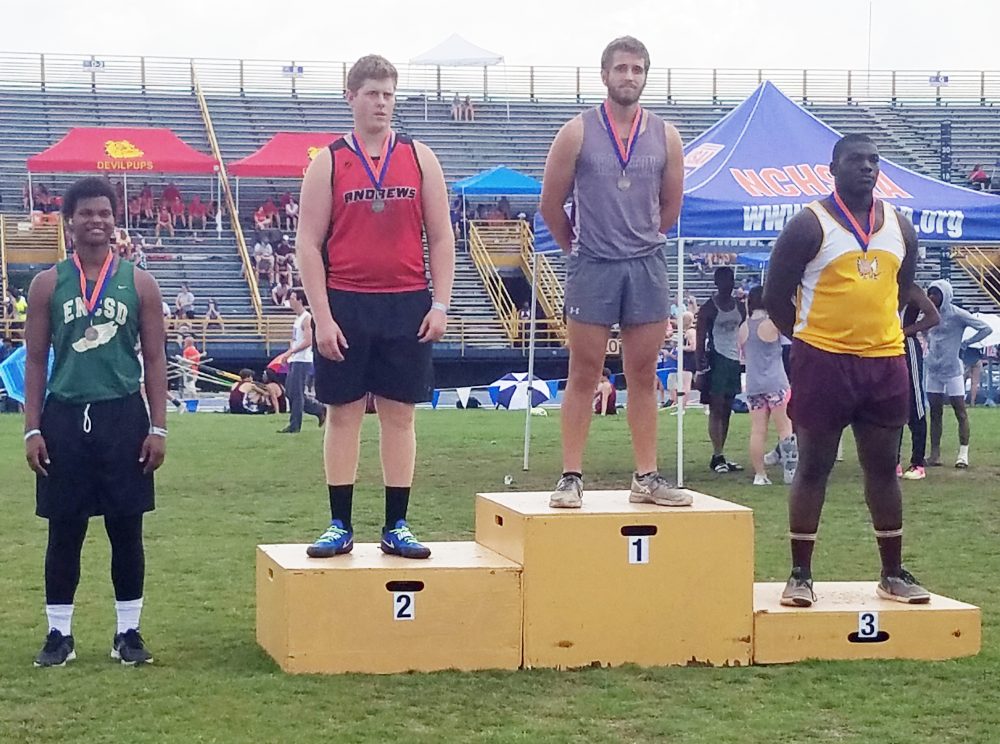 The 2018 NCHSAA 1A state track meet May 20 featured several athletes from Stanly County teams at NCA&T University in Greensboro.
Gray Stone senior Jason Reynolds, who has only been throwing for two years, approached head coach Cameron Isenhour wanting to throw the discus as well as the shot put.
During the first meet of the season he threw 43-0, missing the regional qualifying distance by one foot. In subsequent meets, Reynolds either maintained his original distance or improved on those numbers.
At the YVC Conference Championships on May 3, Reynolds threw a personal best of 47-7 to place first. On May 12, Reynolds continued his winning ways as he threw 46-10.25.
Gray Stone’s senior stepped up to the plate at the 1A state meet to beat Abe Christensen (Andrews). With nine throwers in the finals, Reynolds threw a personal best of 49-7, with Christensen taking second with a throw of 47-10.25
Reynolds expected to make the podium at the 1A state meet, but did not expect to win.
According to Reynolds, hard work and dedication helped him achieve his goals.
“I worked hard each day whether we are in the weight room or in the circle,” Reynolds said.
The Gray Stone senior credited Isenhour for his efforts this season, saying “Coach helped me a lot.”
“He helped me perfect the glide technique. He taught me that hard work and dedication is the key to success in track and field,” Reynolds said.
Isenhour described Reynolds as “soft spoken,” adding he “is the type of athlete who has achieved their successes due to their desire to achieve greatness.”
“I have never seen an athlete go from throwing 32 feet 6 inches to 49 feet 7 inches in a season,” Isenhour said about seeing the progression of Reynolds.
“When I watched Jason’s release on his fifth attempt, it was one of my happiest moments of my life, to see the shot land past 49 feet…I knew then, ‘I’ve got a state champion,’ ” Isenhour said.