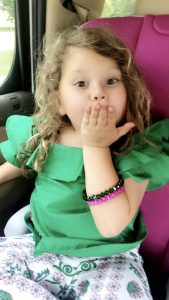 Once they noticed 3-year-old Aly Speight was experiencing developmental delays, her parents then wondered “if she’s hearing us.”

SNHL results from damage to the tiny hair cells in the inner ear. The root cause lies in the inner ear or sensory organ (cochlea and associated structures) or the vestibulocochlear nerve. SNHL accounts for about 90 percent of reported hearing loss.

“We’ve not yet found what caused her hearing loss,” Katelyn said.

“It’s way worse than what we first thought,” she added.

Aly underwent bilateral cochlear implant surgery on June 7. After a healing process to ensure there’s no infection, doctors will activate the implants on June 28.

Activation will begin minimally and be accompanied by extensive therapy.

“There will be several months of therapy to train Aly’s brain to learn to hear again. It’s not a quick fix,” Katelyn said.

In an effort to offset mounting medical expenses, a barbecue benefit at Millingport Volunteer Fire Department is scheduled Friday on behalf of Aly.

Plates include half a pound of pork barbecue, slaw, chips, bun and dessert. Cost is $8 for a plate.

To pay by check, make the check payable to Helping the Hurting Ministry, adding Aly Speight on the memo line.

All proceeds go toward medical expenses.

Aly is the great-granddaughter of Hoyle Barrier, who cooks barbecue for numerous community benefits as part of The Good Ol’ Boys.