woman were pulled over by Rockingham Police and Richmond County sheriff’s deputies late Monday night, suspected of stealing from a chain store.

According to a police report, 55-year-old Daniel Gatewood, of Morven, and 47-year-old Josie Honeycutt (spelled “Huneycutt” in other jail and court records) Riggsbee, of Norwood, stole “assorted household items” from Walmart. 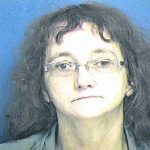 The suspect’s vehicle was stopped in front of Rick and Al’s Car Wash, about 2.5 miles away on U.S. 74 Business.

Riggsbee was taken from the vehicle and handcuffed, pleading “Baby!” twice before she was placed inside a deputy’s patrol car. Gatewood remained outside as deputies and police officers searched the small SUV.

While the report doesn’t list specific items, deputies were seen pulling several bagged items and placing them on the ground. There also appeared to be two gallons of milk.

Representatives from Walmart were brought to the scene by a Rockingham police officer and the alleged stolen items were returned.

The report states that both Gatewood and Riggsbee were issued citations and released. However, Richmond County Jail records show Riggsbee was booked at 11:33 p.m. and released at 12:56 p.m. Tuesday afternoon to the custody of the Anson County Jail.

Online court records show Riggsbee is also facing one felony count each of larceny and possession of stolen goods or property, as well as one misdemeanor count each of larceny, shoplifting/concealment of goods and second-degree trespassing in Montgomery County. She also has several pending traffic infractions in Stanly County.

Riggsbee was previously convicted of misdemeanor larceny (2007) and shoplifting (1991) in Stanly County, according to records with the N.C. Department of Public Safety Division of Adult Correction.

Gatewood has no prior convictions in the North Carolina, according to state prison records.

All defendants facing criminal charges are presumed innocent until proven guilty in a court of law.