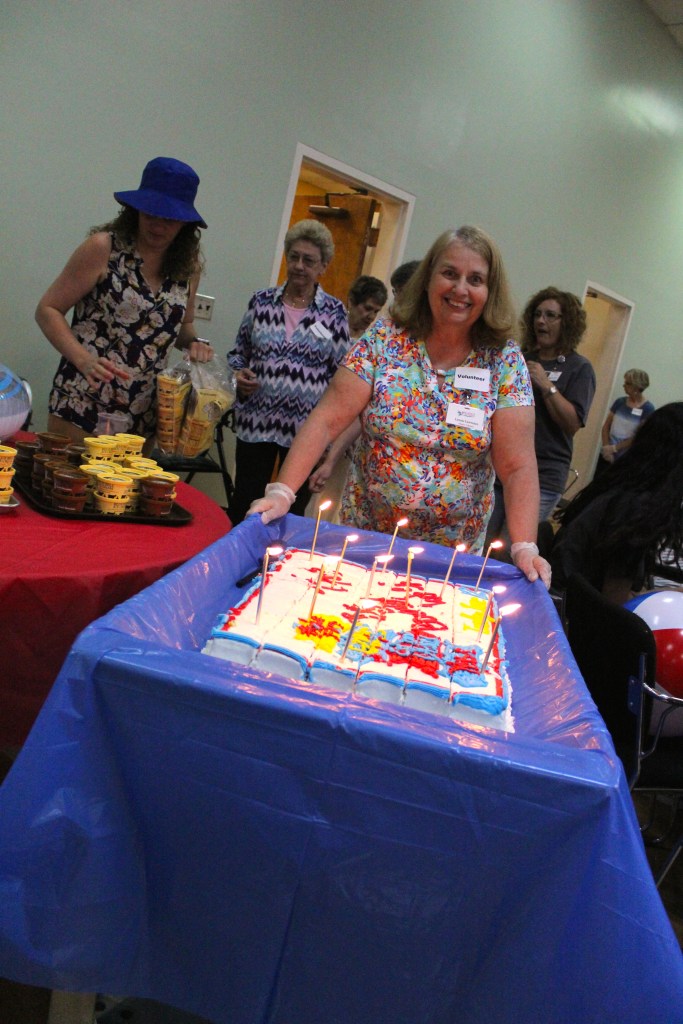 Perhaps it would have seemed a bit much for a normal birthday party. But then again, this was no normal party. The Stanly County Senior Center celebrated not just one person last week, but 114.

“This is by far the most people we’ve ever had at this event,” Senior Services Director Becky Weemhoff said.

For the past 11 years, the Senior Center has hosted a joint birthday party for all seniors turning 90 or older that year. When they started, they had a few dozen, but this year they hosted about 220 including seniors and guests.  The center’s entire activity room was filled with tables and more than 30 volunteers helped with the event.

For example, many at the party spent a lifetime working in their community. Joe Pickler, a 92-year-old who came out from Bethany Woods, worked at Carolina Welding for 50 years. Hazel Lefler, a 101-year-old sitting at one table with her niece, was one of the county’s first librarians (as well as a secretary for William Harris before he started the grocery store chain Harris Teeter).

Others laid foundations for Stanly’s public services. Bill Mullinix, sitting at a table with some friends, lobbied in Washington to get money for the Stanly County Airport. Dr. Davis Fort, a local OB-GYN, served as a county commissioner when Stanly was expanding services.

Still others spent years caring for the community. Doris Shimpock, along with her late husband Farrell, loved on family after family through their ministry at local Baptist churches. Joe Ferebee, a former coach for Pfeiffer University, taught discipline to generation after generation through the sport of baseball.

And they’re not done yet, it would seem. Willie Mae Harris had just come back from volunteering at the hospital when she came to the party. Ruth Cotton, who lives next door to the Tarheel ChalleNGe Academy, still supports that institute any way she can. In fact, she’s attended every graduation since they started.

“All the wisdom and years of learning you bring to this community are priceless,” Weemhoff said.

To express that same sentiment, 27 local businesses and organizations sponsored the event with either money or materials this year.

For both him and other seniors at the event, birthday parties were few and far between growing up, he noted. The Great Depression was going on when they were kids, so there wasn’t money for a lot of extras.

“Every so often we’d have something,” Pickler said. “But it wasn’t until I got married that my wife made a point of it.”

Likewise, Lefler and Harris can’t remember many gifts growing up. But they do remember their mothers baking cookies or some other special treat on their birthday.

“I also had a sister born on my seventh birthday,” said Harris, one of nine siblings. “My mom always told me she was my birthday present after that.”

But as the music played and the cake made its rounds, it hardly seemed to faze them. Some seniors got up to dance, others tapped their feet or sang along. Like celebrities, they were regularly stopped by volunteers for a photo or a handshake — particularly the three seniors over 100 years old.

“It’s not often you have so many drivers of the community in one place,” Hall said.

And that might just be worth going over the top.