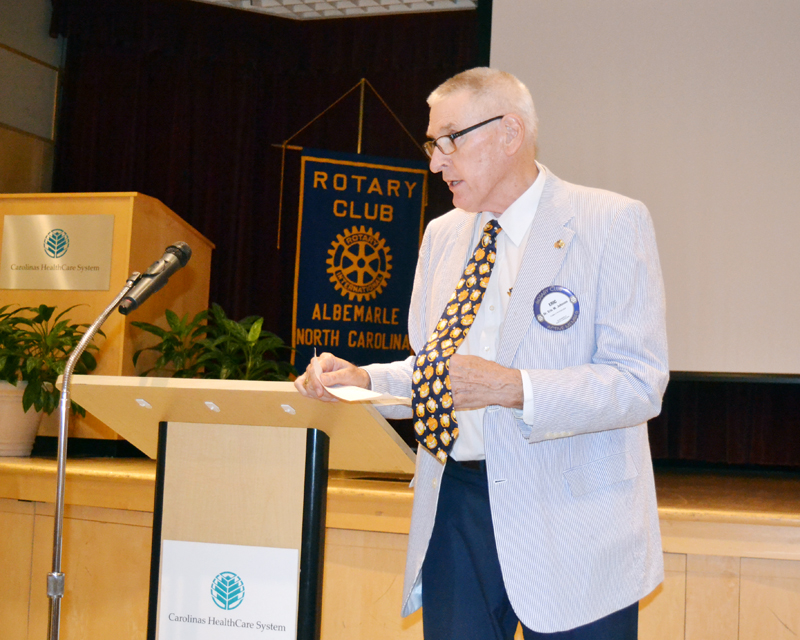 If laughter is the best medicine then quick-witted Dr. Eric Johnsen ought to be able to cure anything.

No one can rattle off more interesting, yet randomly obscure, tidbits of humorous information than Johnsen. Who needs Wikipedia when there’s Dr. Johnsen?

His wealth of knowledge is no accident. The fact is Dr. Johnsen is well-read, not to mention well-respected and well-liked — all becoming qualities for a country doctor.

For the past 38 years Johnsen has been a general practitioner at Stanly Family Care Clinic in Albemarle where he has treated four generations of local families.

“I don’t have any patients. I have friends that I send bills to,” Johnsen said.

It doesn’t take long to discover he’s an old-school doctor, otherwise a dying breed. He still believes a doctor should develop relationships with patients. Instead of rapidly turning patients over for the next one to keep the fees tabulating, Johnsen prefers spending time with patients.

“He exemplifies the Golden Years of medicine where he is truly interested in all aspects of his patients and families inside and outside of the office rather than somebody that programs you for a 15-minute visit bent over a computer,” said Dr. Bob Gaither, who is among Johnsen’s patients.

“He really cares about his patients. It’s not just a job,” echoed patient Russ Myers.

Johnsen laces humor and dry wit with serious subjects, like when Gaither was to undergo surgery.

“Can I have your train collection?” Gaither said Johnsen countered with his bid of “ ‘it’s been nice knowing you.’ ”

It’s common for Johnsen to playfully banter with patients and friends. 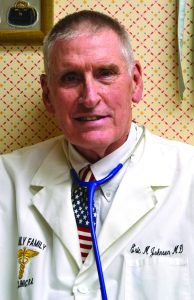 “When seeing him in the office one of his first questions is, ‘Dr. Gaither, will you in detail describe your exercise programs’ as you sit there overweight and under exercised,” Gaither said.

Tuesday night friends gave it to Johnsen as good as he gives it with a surprise retirement party and roast at Rosebriar.

Friends took turns poking and jabbing, much like Johnsen dishes out at Thursday’s Albemarle Rotary Club luncheons. As a Rotarian he heads the weekly Health and Happiness segment, which plays like a 5-minute stand-up comedy routine.

Between an ideal bedside manner and quirky bits of information, every doctor’s visit is as entertaining as helpful.

Perhaps the useless trivia and dry humor tempers an otherwise serious occupation  with, at times, life or death consequences.

Johnsen insists there are two things patients take just as hard as news of cancer and heart disease.

“They can’t drive anymore or they can’t live at home,” Johnsen said in his serious doctor’s tone. “They’re hard for patients to accept.”

If the “e” in Johnsen wasn’t enough of a clue, the good doctor does not hail from the South. Other than his affable disposition, most might wonder how the Michigan native sustained life here for so long.

After all, he does not drink sweet tea. He claims the concoction should be served hot and from a pot.

He compared his experience with country ham to chewing on “shoe leather.”

Instead of taking a side on barbecue’s eastern or western style dilemma, he chooses to spar over semantics.

“Barbecue is a verb in the North, not a noun,” Johnsen said.

Once he repeatedly tried to get a waitress to explain what kind of meat had been barbecued.

Yet, there was hope for Johnsen. After visiting his first fish camp, he “loved it!”

Gaither has a theory on why Johnsen was so quickly accepted in these parts.

“His involvement in the community and his sincere concern for his patients and their family quickly erased all North-South prejudice,” Gaither said.

Johnsen, then a biochemist, first became enamored with the South when he worked as a lab assistant at Duke from 1972-73.

“I thought there were going to be hound dogs on the porch and everybody would be barefoot,” Johnsen said of his earlier vision of the South.

But, between the mild climate and cheap living, he quickly learned to appreciate the South. And the South’s climate meant he could play golf, tennis and run most anytime.

“When you go running in Detroit you were under suspicion for leaving the scene of a crime,” Johnsen said.

After he decided to pursue medical school at Wayne State University in Detroit, he decided he wanted to settle in the South.

When he broached the idea of moving south with his then girlfriend, Judy, whom he met on a blind date in his third year of medical school, she favored the idea. Ten weeks after their date, they were engaged.

“It was like magic. I was blessed to have met him,” Judy Johnsen said. “He had a great sense of humor and was very genuine. He has a real view of what’s important.”

Dr. Johnsen worked as an intern and had his residency at Albert B. Chandler Hospital on the campus of the University of Kentucky while moonlighting in nearby Paris, Kentucky.

He wanted to live in a small, Southern town with a population between 10,000 and 25,000. Johnsen wanted to practice where there was a sound hospital, good medical staff, a nice residential area near a medical center, great schools, decent park system, less than a 5-minute drive to work and within 1 hour of a major airport.

Johnsen turned his attention to North Carolina, considering the towns of Thomasville, Southern Pines and Albemarle.

In July 1980, a palatable offer led him to join the practice of Dr. John Gaskin.

Once in Stanly County, Johnsen regularly performed physicals for Albemarle High School athletes, worked as the doctor at Pfeiffer College from 1981-2004 and treated injuries for Wiscassett Mills.

Friday will mark his final day as he turns his attention toward retirement. At 72 years old, he wants to enjoy life while he’s in good health and spend more time with his five grandchildren that live out of state.

His staff will continue to operate the office through the end of August for administrative purposes before it makes way for incoming Asheboro Dermatology.

When asked if he ever participated in any medical miracles as a physician, Dr. Johnsen said: “Life is a miracle. When you deliver babies, every day is a miracle.”

In honor of Dr. Eric Johnsen’s retirement, The Stanly News & Press presents interesting facts about him much like the random nuggets he offers weekly for the Albemarle Rotary Club.

• A native of Ann Arbor, Michigan, home of the University of Michigan, Johnsen attended undergraduate school at Western Michigan University in part because the Broncos recruited him to play football;

• Johnsen attempted to enlist in the U.S. Navy and the Air Force, but both turned him down because of poor vision. However, he was drafted in the U.S. Army and sent to Vietnam from January 1969 to December 1970;

• Dr. Johnsen birthed his last baby on July 4, 1985. The parents gave their son the middle name of Eric. His first delivery was to a 12-year-old mother;

• Dr. Johnson completed his residency in Kentucky, moonlighting in Paris, Kentucky, which shared the same hometown as Triple Crown winner Secretariat who lived at Claiborne Farm;

• His father was a professional baseball player and a school superintendent;

• Dr. Johnsen has not taken a new patient in the last 10 years;

• Johnsen and his wife, Judy, have three sons, all who graduated from Albemarle High School followed by Furman. All three are professional men, a lawyer, a doctor and a nuclear physicist in the U.S. Navy who is presently attending Massachusetts Institute of Technology (MIT) for a third graduate degree;

• Dr. Johnsen offers the following as keys to a healthy body: 1. Choose your parents wisely; 2. Eat wisely; 3. Exercise regularly; 4. Get your sleep; and 5. Don’t put poisons in your body (tobacco, drugs and excess alcohol).