AHS Class of 1968 has reunion, makes donation to YMCA 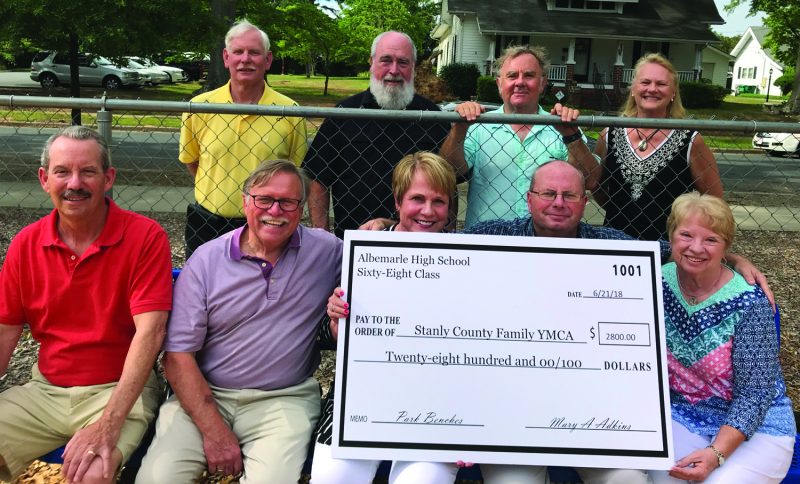 The Albemarle Senior High School Class of 1968 held its 50th class reunion June 1-2.
The Reunion Committee composed of Mary Austin Adkins, Jack Gaddy, Dianne Blake Loflin, David James Mills, Michael Peeler, Gerald Poplin, Tony Poplin, Barry Smith, Marvin Smith, Sherrill Smith, Robert Stonestreet,and Freida Deese Tarlton worked for a year and a half to provide the best experience possible for their classmates.
The class wanted to adopt a project that would have an impact on Albemarle where their roots are and the greater Stanly County area.
The Class of 1968 decided to donate a bench or benches to the Stanly County Family YMCA All Children’s Playground and the greater Charles Cannon Memorial Park where children and adults from all over the county could enjoy them.
It soon became obvious that benches would be the goal when the class collected $2,800 to donate to the YMCA, for a total of seven benches.
Many activities were planned by the Reunion Committee to allow time for classmates to reconnect and reminisce.
Classmates who attended West Albemarle Elementary met for a picnic and tour of the school on June 1.
Many of the classmates met at Harmanco’s for lunch on Friday. That evening, 73 attended a welcome party at the home of classmate Mary Austin Adkins and husband Joe and many attended an after party at Loafers and Legends.
On June 2, classmates could participate in an 18-hole Captain’s Choice golf tournament or enjoy a pontoon ride on Lake Tillery.
The big event, the 50th reunion, was Saturday night at Tillery Tradition Country Club where 99 classmates/spouses enjoyed a program that included many memories of their years at ASHS and honored their deceased classmates and those who were unable to attend.
Following a buffet dinner, members were entertained by DJ Craig Blake and continued to enjoy reconnecting with one another.