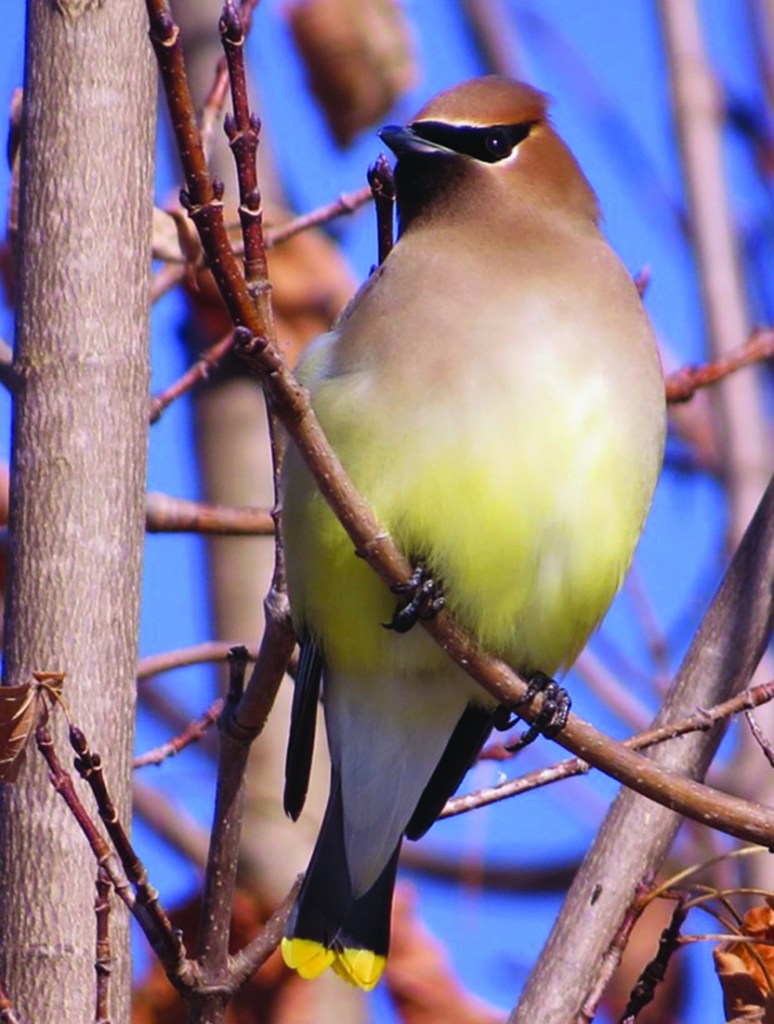 A friend of mine recently mentioned to me that she was enjoying watching some birds with black masks that were eating berries from her holly tree in her backyard in Aquadale. I immediately knew which birds she had seen, as they are a favorite of mine — the cedar waxwing (Bombycilla cedrorum).

Crystal Cockman writes a column for The SNAP through the LandTrust of Central North Carolina.

Cedar waxwings are a beautiful bird. They have a crest on their heads, and a black mask outlined in white. They have a silky, glossy look to them. Their crest often lies flat, giving them an even sleeker appearance.
Their head is cinnamon colored, and they have pale yellow bellies and gray backs. For the most part, they have bright yellow on the tips of their tale. Some, which have been eating the introduced Eurasian honeysuckle, have orange tips on the tail. Most have bright red on the tips of their wings. That red waxy secretion is where the name “waxwing” comes from.
Why they have these waxy deposits is a topic of some debate. At one point it was believed that they reduced wear and tear on the feathers. However, it is more commonly accepted that they are used for display in mate selection. Older males have more red wingtips and raise more young each year than those with fewer red wingtips.
They are a medium sized bird, approximately 7 inches long and weigh about one ounce. Their call is a high thin whistle and they are not territorial.
Cedar waxwings love berries and fruit and commonly dine in groups. When the food source is only reachable by a bird or two, they frequently pass berries from beak to beak so all can eat, and can strip a tree of berries in minutes. They are one of few birds that can exist on berries alone for months.
Brown-headed cowbirds, which parasitize nests of other birds by laying their eggs in them, do not do so well in cedar waxwing nests because they provide their young with so much fruit.
They are primarily found in North America, although they can go as far as the northern reaches of South America. It is not a long-distance migrant, but rather a bird that migrates mainly in response to weather changes.
They are found in open woodlands and old fields, hedgerows, thickets, suburban gardens, and orchards. Plants that might attract cedar waxwings include dogwood, serviceberry, juniper, hawthorn, winterberry, mulberry, cherry, hackberry and crab apple.
Cedar waxwings are monogamous for the season, with the female and male both working on the nest and caring for the young. The mother bird will lay 3-6 eggs and sit on them for about two weeks before they hatch.
Young are altricial — born blind and without feathers and the ability to move around and feed themselves. The parents continue feeding them for another couple of weeks until they are able to leave the nest. They have two broods per year.
Overall, the population of cedar waxwings is on the increase and they have even expanded their range. This may be a result of the creation of edge habitats with fruiting trees and shrubs, the transitioning of farms back into forest, along with the reduction of pesticides in many forms of agriculture.
One of the major threats to cedar waxwings is collision with windows and automobiles. They have a large population size and a large range, and as a result are considered a species of least concern on the IUCN (International Union for Conservation of Nature) red list.
Keep an eye out for these glossy, masked birds in your own backyard or neighborhood. Whether it’s one individual carefully picking berries from a tree, or a group of gregarious birds ravaging your holly bushes, their captivating features will make them a standout amongst your regular backyard visitors.

Crystal Cockman is land protection director for The LandTrust for Central North Carolina, of which Stanly is part.