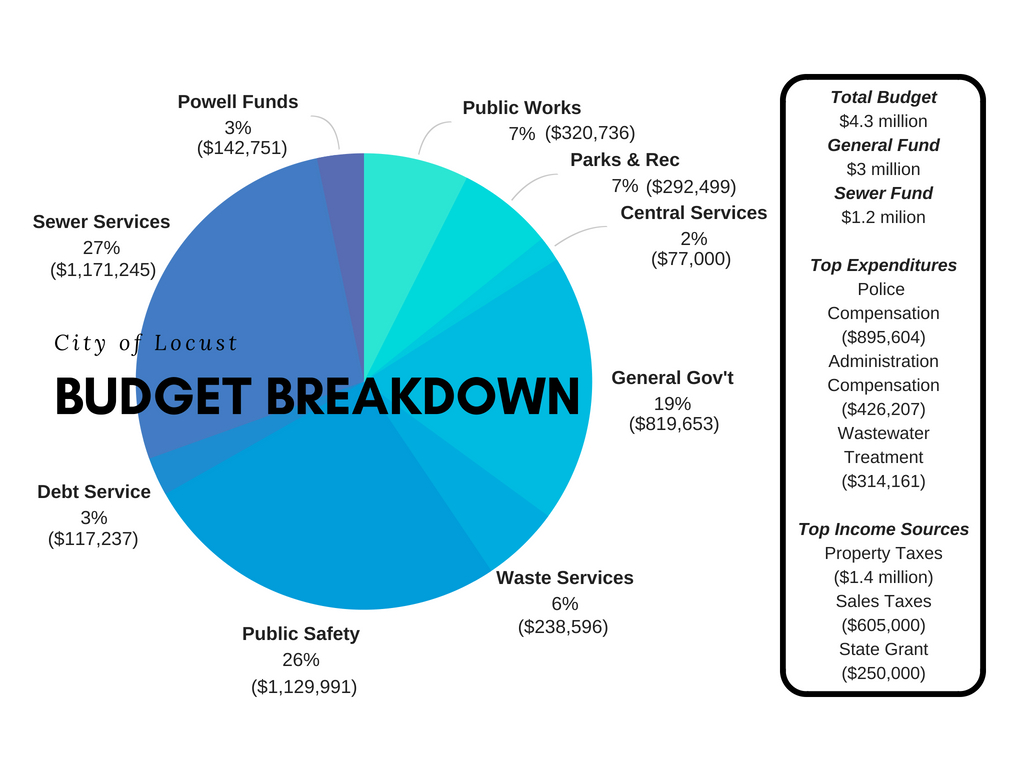 For 21 years running, Locust property taxes will remain the same.

At their last meeting, city councilors approved a budget that will maintain the current tax rate of 36 cent per $100 valuation during the 2018-19 fiscal year, the same it has been since 1997. In addition, the city’s sewer rates will remain the same.

However, while residents’ expenses aren’t going anywhere, the city’s overall budget is going up.  Both revenue and expenses will rise 8 percent during the next fiscal year, from $4 million to $4.3 million.

A large chunk of that increase comes from a $250,000 grant from the state for a sidewalk project along Market Street. But the city will also draw about $190,000 from the city’s reserves to fill out the budget.

The increase will enable the city to take on a number of new projects during the 2018-19 fiscal year. One of the most noted of those is an additional $120,000 for the Locust Police Department. That money will go primarily to funding a school resource officer for Locust Elementary School.

Another $100,000 will be set aside for a pair of upcoming wastewater projects — a lift station at Redah Acres and improvements to the city’s North Basin.

Several new equipment purchases were worked into the new budget, as well, including a new truck for the public works department, a utility vehicle for parks and recreation and a hydro-jetter for the waste water department.

In addition, funding for employee salaries and benefits is slated to go up. Between a 3 percent cost of living increase and the addition of two new police officers, every department except administration will need more funding in that area. However, not as much as originally anticipated.

Just prior to their final budget hearing, city staff received word that their health insurance rates would decrease about 1 percent during the 2018-19 fiscal year.

“Which is better than we thought,” City Administrator Cesar Correa said.

After seeing insurance rates spike for several nearby municipalities, staff had penciled in a 25 percent health insurance increase into prior drafts of the budget, he detailed.

“So this gives us something extra to work with,” Correa said.

And there may be more than just a little extra insurance money to work with come next June. The city purposefully lowballs its income on each budget, just to be safe. For example, they use old property/sales taxes to figure out the budget. So if any new houses or businesses break ground in the next year, those taxes come in as a surplus.

In fact, during the past fiscal year, Locust wound up with a surplus of $371,000. So at their last meeting, councilors redistributed that as needed. About $48,000 went to buy equipment for the police/parks and recreation departments, about $148,000 went to retire city debt and another $175,000 was deposited in their cash reserve.

Both the 2018-19 budget and the surplus distribution were approved unanimously (with councilor Mandy Watson absent).

“I’d like to just applaud everyone who had a part in this (budget) process, even the ones you don’t see,” Councilman Harry Fletcher said. “It’s been a team effort.”