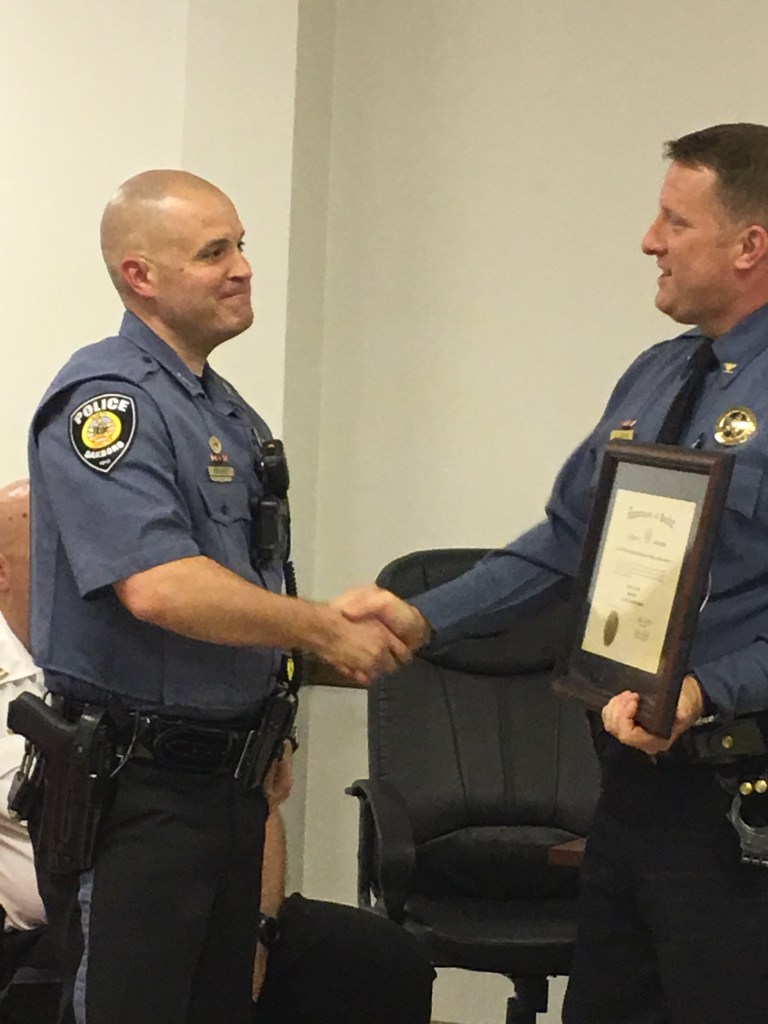 Oakboro Police Officer Jason Eschert receives his Intermediate Law Enforcement Certificate from Chief T.J. Smith. Eschert has been with the department for less than a year.

The Oakboro town council unanimously passed its budget on June 18.

About $107,295 will be spent on administrative salaries, $320,000 on full-time officers’ salaries and $25,000 was earmarked for part-time officers. Insurance and retirement contributions will also make up significant expenses. The town also set aside $82,000 for its fire protection contract.

The parks department will receive about $196,800, with $88,200 going to employee salaries. The rest will be divided into utilities, providing recreational activities, health insurance and other expenses.

The town’s sewer budget is set for $565,200, with $190,000 going to sewer treatment and $71,000 towards a loan payment. Salaries make up the next largest expense at $67,000, with other line items dedicated to utilities, life insurance, generator repairs and more.

The water budget is set for $496,700. The largest expense at $125,000 will be spent on purchasing water from Stanly County. The department will also spend about $98,000 on salaries, $30,000 on radio-read water meters, with other expenses including a lab contract, supplies and chemicals, safety equipment and more.

The full budget is available to view through the town of Oakboro.

Jeff Crisco, who won the primary election for sheriff in May with more than 50 percent of the vote, told the council that while he doesn’t “want to get ahead” of himself before the general election, he did want to learn what the council would like to see from the new sheriff.

He encouraged the council to think about what it needs from the sheriff’s office and its deputies ahead of time, and gave the council his cellphone number.

The council went into closed session. Upon reconvening, it passed a 3 percent cost-of-living salary increase for town employees, according to town clerk and finance officer Patti Efird.

The next regular town meeting will be at 7 p.m. July 16 in the town hall.