I know that some of you may be uncomfortable reading about snakes, but I am asking you to read the story so you can understand my purpose. I know that many readers believe that the only good snake is a dead one. I had an uncle who taught me to be careful around snakes, but not to be afraid of them. I remember a picture from his workshop of him with several black snakes hanging off his arms and around his neck. 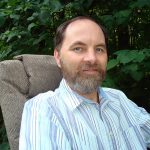 Doug Creamer writes a religion column twice a month for the SNAP.

I have seen black snakes around my yard from time-to-time. We have woods next door, and naturally they will come to visit. They can give me a good scare when I pick up a bag of dirt or open the shed door and see one. Naturally, I jump back. Once I identify the snake as a black snake and not a poisonous one, I am fine.

The other day I was out in the garden and noticed something in the netting around my blueberries. Upon closer inspection, I discovered it was a black snake. He was wound around the netting and trapped. He had obviously been struggling for a while as he had several open sores. I started to try and untangle him and noticed that he was alive.

He was so wrapped up in the netting the only solution was to start cutting it away. I tried to shake the snake free a few times, but the netting would not give way. After carefully cutting for a while I got a closer look at his head. His mouth was clamped shut by the netting too. I continued to work, especially where the netting had cut into his skin. I had one more section of netting to go when his head got free.

He was ready to go, but not totally free from the netting. I did the best I could. The only problem was a piece of the netting was still tightly wrapped around his body. The snake just wanted to get back in the woods. I was glad to see it go.

I went out to the storage building a week later and found the snake. I knew it was the same snake as he still had the netting around his middle. I got him outside and decided I would make one last attempt at freeing him. I laid the hoe handle across his head to keep it down. I lifted his body and got the scissors under the netting and started to cut. The snake jumped in pain as I pressed in to cut the final piece away.

I know this might sound strange, but the snake stopped and looked back at me before slithering into the woods. It was like he stopped to thank me for his freedom. I noticed that all the wounds on his body had healed except where the final piece of netting was stuck around him. This whole incident has had me thinking.

I believe that sometimes we all get stuck. We can be lost sinners needing a savior, or even children of God who find ourselves entangled in sin or suffering. For the lost sinners it is hard to ask God for help when we are the ones responsible for the mess we are trapped in. We feel unworthy of asking for Jesus’ help. We got ourselves in this mess; we have to get ourselves out.

Sometimes as born again believers we might find ourselves entangled. It is in those moments that we have to humbly come back to Jesus and ask for help. We have to be willing to trust Him as He works to remove the thing that is strangling the life out of us. He has the power to set us free and bring healing. We simply have to come to Him.

I want to encourage you to come to Jesus and allow Him to touch your life, to heal and set you free. He loves you and wants you to be His brother or sister walking free and representing Him to all you meet. Do you know that God wants us to live free and healed so we can help others who find themselves entangled? Let His hands touch you, heal you, and set you free.