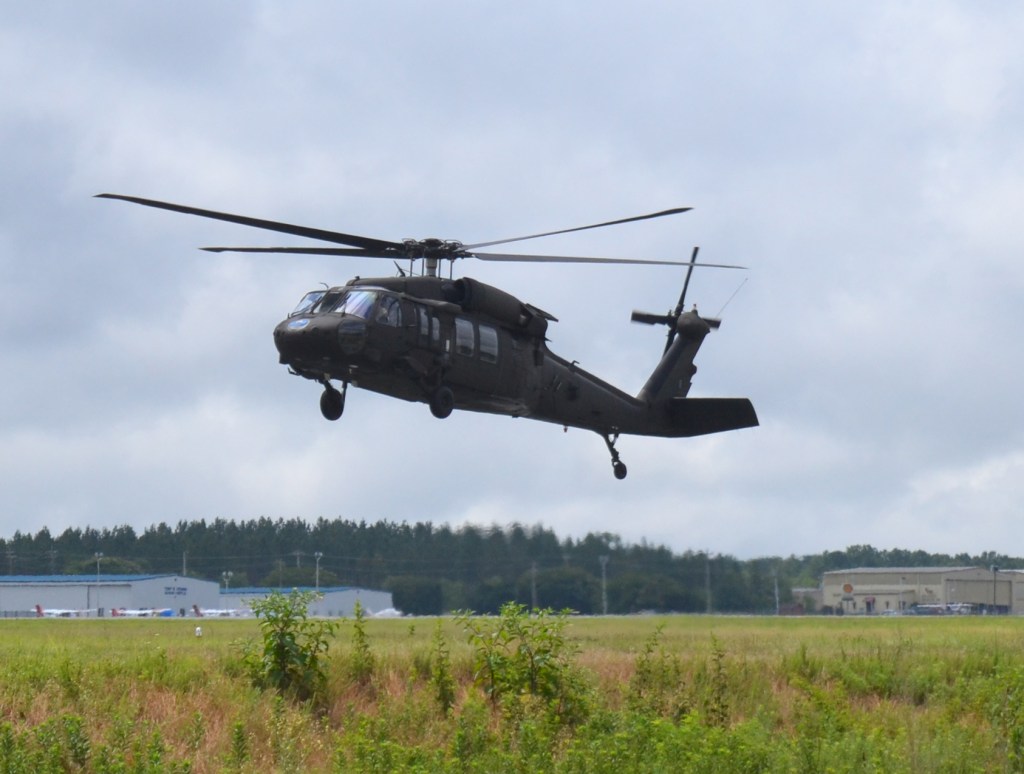 (Photo by RITCHIE STARNES/staff) An Army National Guard unit from Salisbury lands a Black Hawk helicopter for the Civil Air Patrol's weeklong encampment and training exercises at the airport, Tuesday.

Between the ages of 12 and 21, these cadets from across North Carolina, two from out of state, are participating in  weeklong training. The training exercises include such components as safety, aircraft operations, and search and rescue. All of the cadets are being housed at the Air Guard Regional Training Site at the airport. 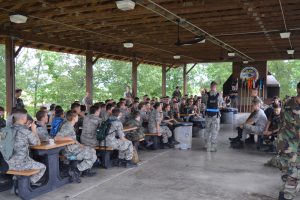 “This is where they get their introduction to Civil Air Patrol,” said Capt. Kate Maxfield. “This is a gateway to our activities.”

CAP is part of the U.S. Air Force Auxillary. The civilian-based organization searches for and finds the lost, provides comfort in times of disaster and works to keep the homeland safe. Aside from their careers, CAP’s 56,000 members devote their time, energy and expertise toward the well-being of their communities, while also promoting aviation and related fields through aerospace/STEM education and helping shape future leaders through CAP’s cadet program.

This week’s 40-hour program affords the young cadets the opportunity to develop leadership that can be carried over to other organizations.

“They’re learning how to deal with conflict management,” Maxfield said.

• Members of CAP perform emergency services for state and local agencies as well as the federal government as the civilian auxiliary of the U.S. Air Force and for states/local communities as a nonprofit organization. Not only does CAP assist in times of disaster but also to search for the lost and protect the homeland.

• CAP’s awarding-winning aerospace education program promotes aerospace, aviation and STEM-related careers with engaging, standards-based, hands-on curriculum and activities. It shapes the experiences and aspirations of youth both in and outside of CAP’s cadet program. 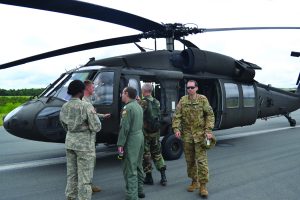 (Photo by Ritchie Starnes/staff)
Members of the Army National Guard land a Black Hawk helicopter at the Stanly County Airport to meet with officers with the Civil Air Patrol. Cadets were briefed on the helicopter before going airborne in the Army’s workhorse.

• CAP’s cadet program transforms youth into dynamic and aerospace leaders through a curriculum that focuses on leadership, aerospace, fitness and character. As cadets participate in these four elements, they advance through a series of achievements, earning honors and increased responsibilities along the way. Many of the nation’s astronauts, pilots, engineers and scientists first explored their careers through CAP.

Many of the cadets are already interested in aviation, some with their pilot license.

“We want to introduce aviation to the cadets,” said Lt. Col. Chris Bailey.

Others use CAP as a springboard to a future in the military.

“It can be, but doesn’t have to be,” Maxfield added about cadets opting for the military.

Bailey, who works for emergency services with the state of North Carolina, said he obtained all of his experience through CAP and not the military.

However, Mason Doty, a flight training officer and a ROTC student at East Carolina University, fielded cadet questions Tuesday morning. Many of those questions related to military scholarships.

Bailey explained that both branches are in dire need of accomplished pilots; therefore, they lend their aircraft and expertise to the CAP in hopes of bolstering military recruitment.

Tuesday cadets waited out rain and low-cloud cover for an opportunity to get up close and personal with the Black Hawk helicopter, deemed the Army’s workhorse.

CAP also used its own fleet of aircraft for the week’s training.