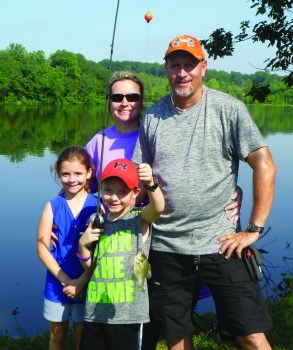 The Evans family, of Richfield, are avid fishermen and enjoyed catching catfish and bluegill on Saturday. Back, from left: Ashlyn, 8, Michelle and Aaron Evans. Front: Chase Evans, age 7. 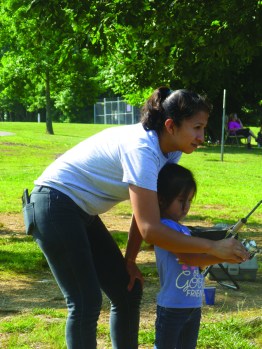 Isabel Martinez reels in a line with Delilah Medina, age 4. 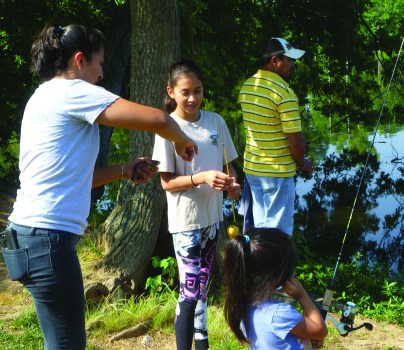 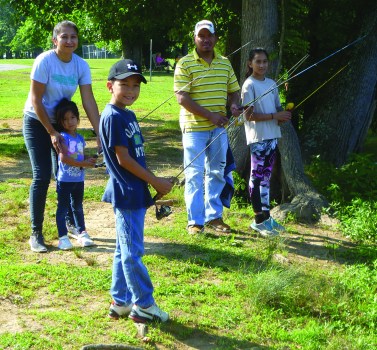 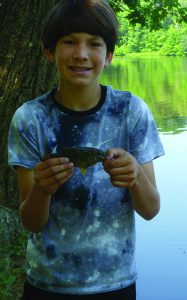 Noah Davis, 14, of Waxhaw displays one of several fish he caught during the event.

The event was one of several held by the N.C. Wildlife Resources Commission, Neuse Sport Shop, Trout Unlimited and the U.S. Forest Service to celebrate National Fishing and Boating Week. Children could fish for free without a license and try for prizes.

Noah Davis, 14, of Waxhaw attended the event with his grandfather, Steve Gibson of Albemarle. Davis caught several fish, including multiple bluegills and catfish.

Davis has been fishing since he was 2, but it was only his second time participating in a Youth Fishing Day.

Once, Davis used only a tiny piece of worm and caught a 4-pound bass.

He judged City Lake to be a “good spot” to try his luck again.

“I appreciate the city doing this for the kids every year,” Gibson said. “It’s a good opportunity for kids to get out. I like this lake, myself. There’s no big boats.”

Nearby, Aaron and Michelle Evans, of Richfield, watched as their son, Chase, 7, brought in catfish and several bluegills. His sister, Ashlyn, 8, caught a few fish before exploring nearby flowers.

Chase has also been fishing since he was 2, but it was his first time going to a Youth Fishing Day.

Michelle said her son is a good fisherman following years of practice catching trout in the mountains with the family every year.

Chase won a rod and reel and Ashlyn won a tackle box during the event.

The family said the park was a nice fishing spot.

“I like the accessibility of it, and being able to walk up and not hike,” Michelle said.

Aaron noted that the ease of reaching the lake made it a prime location for fishing with very young children. 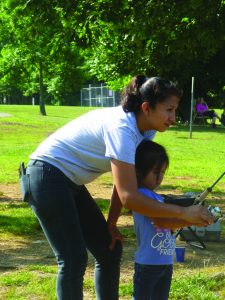 Isabel Martinez reels in a line with Delilah Medina, age 4.

The family missed last year’s fishing event but made it to the two previous ones.

“My little boy was probably 3 when he started fishing,” Martinez added.

Fishing with toddlers was difficult; often, fishing lines ended up in trees, cups of crickets were spilled and Martinez spent a large amount of time detangling lines.

“I enjoy it more now because they do more themselves,” Martinez said, occasionally coaching or assisting Delilah.

“Because they always get their line caught in the tree.”

The family still might end up with the occasional line in the tree, but they catch more fish than branches now. As they spoke, Hector brought in a large bluegill.

Taylor Hurley, program supervisor for Albemarle Parks and Recreation, said that the event had twice as many participants as last year, bringing in about 15-20 this year.

Last year, participants only caught one or two fish, but many were brought in this year. Children were awarded prizes for raffle tickets, including rods and reels, lures and tackle boxes. Each child also received a goody bag with a pen, keychain, pencil and sticker.

“We had a couple of kids helping other kids get their worms on,” he said.

He believes the event is not just fun, but beneficial.

“It’s good because a lot of kids don’t get a chance to fish or have a license,” Hurley said. “They don’t have to have a license (today).”

Participants in the Albemarle and other events will be entered into a drawing for prizes, ranging from the top prize of a lifetime freshwater fishing license to playing cards and other prizes. A list of winners will be posted on ncwildlife.org in July.