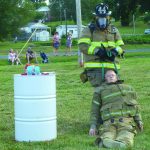 Photo by IMARI SCARBROUGH
Joe Brown, a firefighter with the Oakboro Fire Department, drags
a dummy in an oval around an obstacle
in the third step of
the relay of the firefighters competition at the Oakboro Fourth of July Celebration.

Four fire departments placed in a competition on Saturday during Oakboro’s Fourth of July celebration. While East Side Volunteer Fire Department didn’t go home with a trophy, the members did receive special art displaying the name of the event and the name of a firefighter they lost last month.

Several members of the East Side Volunteer Fire Department, including Capt. Andy Efird and Dakota’s father, Capt. Jimmy Snavely, accepted the gift. They requested that the other firefighters sign the front of it.

The Firefighters Competition was comprised of two events: a relay and a duel.

In the relay, each team had to dress in full gear and be on air before running to their stations. Each of the three members had a task: the first hammered a weight from one end to the other on the Keiser machine, where a firefighter stands on an I-beam and hammers at a weight beneath them to knock it to the other side.

The second dragged a dummy in an oval around a barrel and the third performed the hose line advancement, grabbing a hose from the truck and running as quickly as possible to where they could spray a target cone. Once the cone was knocked over, they dashed to meet their teammates.

After the quick-dress, each firefighter had to wait until the one before them finished their task and tagged them in before they could do their part.

All teams finished in under seven minutes, and in the heat, the event was grueling. One firefighter from East Side had to stop partway through the Keiser machine task. Others completed the relay, but often fell to their knees while running before getting up to finish their task.

Badin took home the first-place trophy in the relay with a time of 3:13.2. Firefighters Timothy Jarman, Joe Garnett and Eric Rummage did the Keiser machine, dummy drag and hose line advancement, respectively.

Oakboro Fire Department came in second with a time of 3:52.1. Joe Brown did the dummy drag, Randall Patterson handled the Keiser machine and Patrick Shambaugh ran with the hose.

In third place was Bethany Fire Department’s Team Two with a time of 3:52.7. Justin Carter ran with the hose, Michael Shoaf completed the Keiser machine task and Ray Preston dragged the dummy.

After the relay, the firefighters completed the Fireman’s Duel. High above the ground, a bucket dangled from a line suspended between two teams. One team was stationed at either end, and when given the signal, they used their hose to spray at the target, pushing it to their opponents’ side. After the whistle blew, the teams would change sides and play again to determine the winner.

Aquadale was paired against Badin, Endy faced East Side and Bethany Team Two competed against Oakboro. Bethany Team One then faced Oakboro and Badin played Endy.

Oakboro and Endy ended up vying for third place. The teams were tied after two rounds and played a third round, which Endy won.

Bethany Team One and Oakboro fought for first place, and Bethany was the champion.

At the end, trophies were distributed to the relay and duel winners and East Side was honored.