A man who attempted to rob an Albemarle convenience store Friday morning was later nabbed by police. 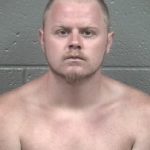 Eric Brandon Springer, 26, was arrested on charges of felonious common law robbery after Albemarle police apprehended him during a search for the suspect, police said.

According to police, at 9:57 a.m. Springer allegedly entered the Quik Check at the corner of U.S. Highway 52 and West Main Street and demanded cash under the pretense he was armed with a handgun. However, he did not display a weapon.

When the clerk could not open the register in a timely manner, the suspect fled the store on foot, police added.

Video surveillance showed the suspect was wearing jeans, a blue shirt with a white stripe and a white undershirt, police said.

Officers located the suspect at a residence on Harwood Street after a search of the neighborhood. He was later identified as the suspect in the attempted robbery.

Springer was jailed under a $15,000 secured bond and given a court date for July 17.