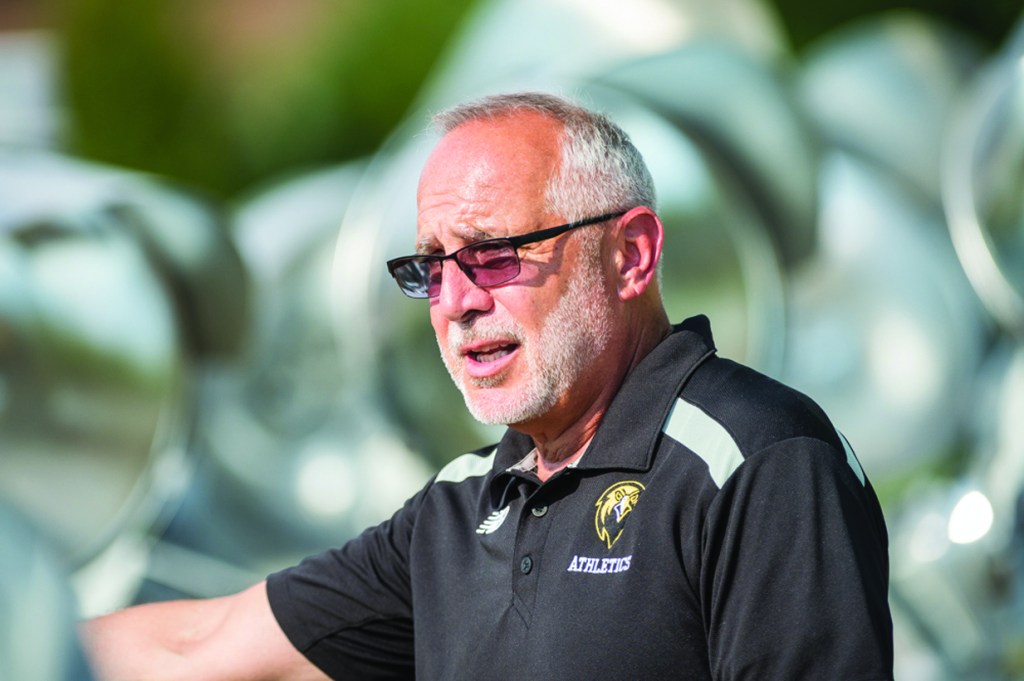 Bob Reasso, a Pfeiffer graduate, coached the men's soccer to prominence by winning a national championship.

Pfeiffer Vice President for Athletics Bob Reasso has announced his resignation to become the athletic director at The American University in Cairo, Egypt.

Reasso served for five years at Pfeiffer and acted as the men’s soccer coach for four years. Reasso led the Falcons to a 25-0 season and NCAA Division II National Championship in 2015 and the Falcons became the first undefeated national champion in 16 years.

“I want to thank the three presidents I have worked for during my tenure,” said Reasso, a Pfeiffer graduate. “I want to thank President Miller for giving me this opportunity and his friendship. Also, President Boone for his mentorship both during my time as an undergraduate and as Athletic Director. I want to applaud and thank Dr. Keith for her courage in moving from Division II to Division III. When I presented the idea to her, it took a brave person to make that transition and it has transformed Pfeiffer University.”

“From star soccer player at Pfeiffer to star coach and athletic director, Bob Reasso has played a vital role at Pfeiffer for a long time,” said Pfeiffer President Colleen Keith. “Bob championed the university’s move from NCAA Division II to Division III, which has proven to be a critical factor in Pfeiffer’s successful growth in enrollment overall. While we are sad to see him leave us, we are very excited about this new opportunity for him in Egypt. It’s a wonderful tribute to his experience and leadership to be tapped to build their program. We expect to continue to hear great things about his work going forward and will cheer him on.”

Reasso’s contributions to his alma mater are numerous. As a soccer coach, he inherited a program that had won eight games in the three years prior to his arrival including just one win the year before he took over and turned them into a national power. The Falcons set the school record for the most wins in a season with 17 in 2014 and then topped that the following season with a 25-win campaign and the only men’s national championship in Pfeiffer history. That season, Reasso was named the National Coach of the Year and three of his players earned All-American honors, including one being named the National Player of the Year.

As the VP for Athletics, Reasso oversaw a multitude of upgrades. In addition to overseeing the transition from Division II to Division III, Reasso helped fundraise and build a VIP seating section for Falcon Club members in Merner Gym. Through his work, Pfeiffer added lights to its soccer, softball and baseball fields in the summer of 2015.

Last winter, Reasso helped finish a complete overhaul and upgrade of the weight room and has also enhanced the playing surfaces at N.E. Lefko Field, Knapp Tennis Center, Jack Ingram Field and the practice fields. Reasso added a track and field program in his first year and also added eSports and cheer/dance programs within the past year. In his five years, Pfeiffer had nine NCAA Tournament appearances and four more teams made the ECAC Tournament.

“I love Pfeiffer, it has been an incredibly rewarding five years,” said Reasso. “I wish nothing but the best for everyone associated with the university. I’ve worked with wonderful players, outstanding student-athletes, great coaches, and administrators and I want to thank everyone from the president’s cabinet to the people who do maintenance and grounds for their hard work and dedication. I am confident that Dr. Keith’s leadership will continue Pfeiffer’s growth and prosperity in the future.”

Pfeiffer honored Reasso as a distinguished alumnus in 1993 and he was elected to the Pfeiffer Sports Hall of Fame in 1995.