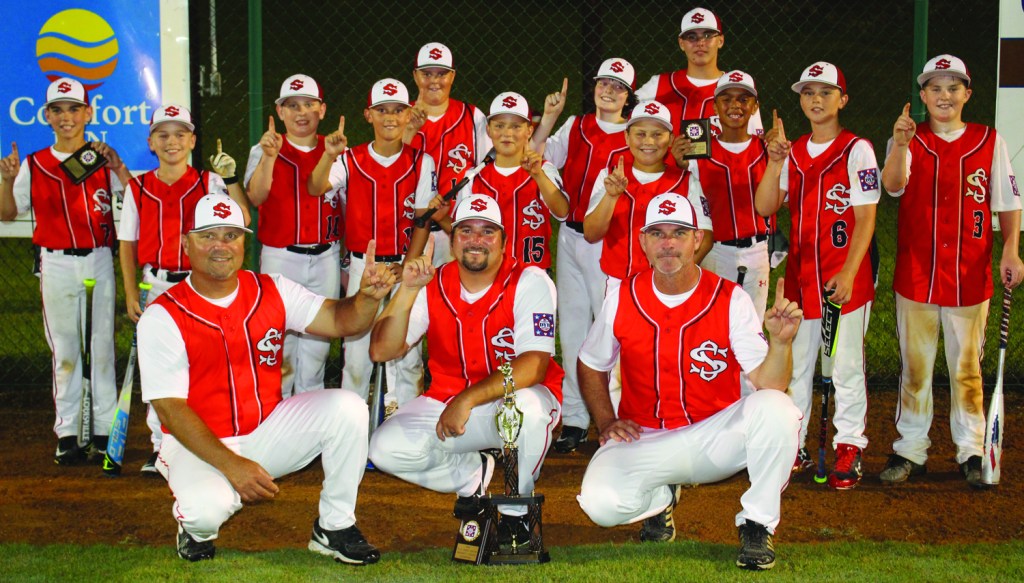 These boys of summer have one more feat before they can partake in vacation: a state championship. Of course, a victory would send them to a World Series in lieu of a vacation.
Fresh off a district championship, the undefeated South Stanly Dixie Youth Ozone Allstars next go to bat for a state championship.
Beginning Friday evening the Ozone Allstar team travels to Eden in pursuit of a state championship. Ten teams will compete in a double elimination tournament to declare a state champion.
“This team is real solid and they play with camaraderie,” said Aaron Thompson, head coach. “They’re a good group of boys.”
If South Stanly’s dominance in the district tournament is any indication, the team has more than a fair shot at going deep in a state title run. Or, they could repeat their recent dominance and win it all.
“Hopefully, if we play right,” Thompson said with cautious optimism.
Two of the 10 teams slated for the state tourney fell victim to South Stanly in district competition late last month in Carthage. West Stanly, the county’s other All Star team advancing to the state championship, and West Chatham were both on the losing end to South Stanly.
South defeated West Stanly 9-1 two games after spanking West Chatham 10-0 in the round-robin tournament.
South also beat Moore County 18-1. Only Montgomery County mustered more than a run against South, but lost 12-5.
South’s strong pitching and stout defense only surrendered seven runs in four games while its offense powered 49 runs.
Daniel Bowles blasted a pair of home runs in the district tourney.
Andy Pampas, head coach for West Stanly, praised South.
“They’re a well-coached team and they’re very disciplined,” Pampas said.
West Stanly, which finished in third place in the district championship, could face South again.
If South wins its game on Saturday, it will meet West on Sunday, Pampas said.
Pampas said his team is capable of winning, but the team lacks consistency.
“If we show up, we’ll do well,” Pampas said. “But these are 12- and 11-year-olds. The players sometimes show up and sometimes they don’t.”
West’s allstars are comprised of the top of the crop from two teams, one in Locust and the other in Endy.
South Stanly’s allstars represent the 12 best players from four teams in the 12 years old and under division that play regular season games at Norwood Dixie Youth Park.
But this collection of players are not strangers to one another.
“This team has been playing together since they were 6 and 7 years old,” Thompson said. “They also play travel ball together.”
The players also attend the same schools, primarily Norwood and Aquadale elementary schools or South Stanly Middle School.
While their familiarity with one another adds to the team’s chemistry, their experience with travel baseball helps give the boys the confidence to execute in pressure moments, Thompson said.
“They’re used to big games,” he added.
Come this weekend the games get considerably bigger, not to mention on the road.
If South Stanly wins the coveted state championship then they advance to an even bigger contest — the Dixie Youth World Series in Lumberton which has opening ceremonies Aug. 3. The North Carolina winner would then play the South Carolina champion on Aug. 4.
And there’s no bigger game than that for the Dixie Youth Ozone Allstars.