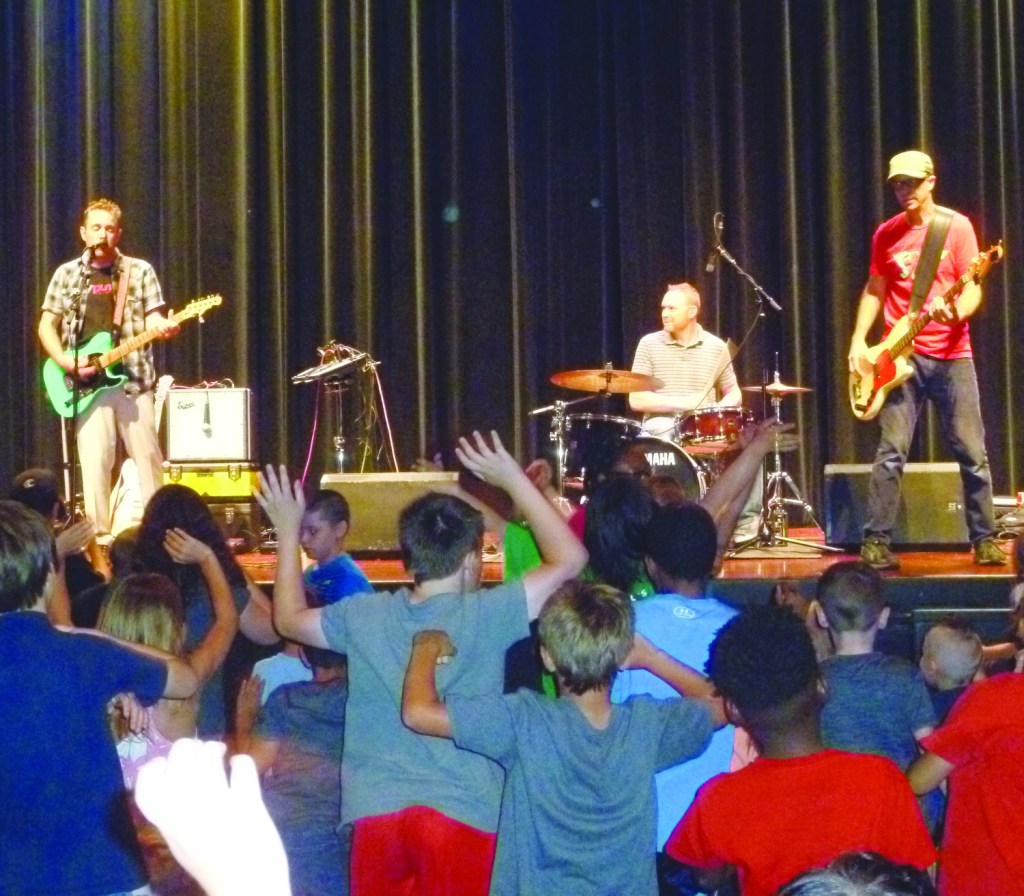 Kids and adults alike laughed, sang and danced with children’s band Big Bang Boom during the Stanly County Library’s summer reading challenge kickoff at the Stanly County Agri-Civic Center.
The children were immediately called down to the stage area to actively participate in the show. They and the adults who remained in their seats were encouraged to dance, particularly during the “Parents vs. Kids Hokey-Pokey Challenge.”
Drummer Tim Ferguson, bassist Steve Williard and guitarist Chuck Folds explained to the children that Tim could only hear them if his name is shouted five times, Steve could only hear his name if it was said in a deep tone and Chuck could only hear if his name was said while the kids said it with their back to him.
After having them practice their names, Folds had all the kids yell their names out at the same time during, “The Name Song.”
“I got it,” Folds said after the babel ended. “The name of this group is, ‘Agh!’ ”
Folds encouraged the kids to sing along with Big Bang Boom originals “The Name Song,” “Monster Under the Bed” “Animal Sounds” and others.
The kids also participated in singing the “Spongebob Chorus,” and Folds led the children in a march around the auditorium during “The Ants Go Marching.”
The band encouraged the children to participate in the performance.
At one point, Folds had the children wave their liver — no, their pancreas — oh, both hands — in the air during the music.
They also followed along to Williard in a game of “Steve Says.”
The band passed out stickers and sold T-shirts following the concert.
Stanly County children’s librarian Sara Hahn briefly took the stage after the show, telling the audience about the library’s summer reading program.
This summer children can attend programs about music, recycling and more at the library branches. They can also participate in reading challenges in three age groups (babies/toddlers, youth and teens).
Babies and toddlers can earn a tambourine, while older children and teens can earn raffle tickets to increase their chances of winning prizes.
To learn more about the library’s summer reading challenge and programs, call or visit a local branch or go to https://www.thesnaponline.com/2018/06/13/stanly-county-libraries-hold-summer-reading-challenge/.
Big Bang Boom is a children’s band based in Greensboro with a mission to make children’s music fun for both kids and adults.
According to the band’s website, its music mixes genres and calls for active participation, with “no singing purple dinosaurs here.”
The band recently performed a live show at Glenn McNairy Library in Greensboro to create a “Read to Succeed” video, available on YouTube and their website, for WFMY News2’s program Read2Succeed.
The band will play in several other North Carolina towns for the tour later this summer. To learn more, visit bigbangboomband.com.