Members of the Stanly Arts Guild recently met at Falling Rivers Gallery in Albemarle. Officers for the coming year were announced and are Lorrie Hatley as president, Wendy Hillhouse as vice president, Carole Poplin as recording secretary, Judith Williams as corresponding secretary, Jill Farkas as treasurer and Rodney Rock as a member-at-large.
Highlighting the evening was the introduction of two art students and their families, and the awarding of annual scholarships. 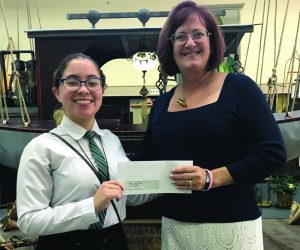 The Patricia Blake Hartley Scholarship, sponsored by the Hartley Family for many years, is awarded each year to a college student from Stanly County majoring in visual arts.
Recipient of the Hartley Scholarship for 2018 is Sophia Montoya, daughter of Troy L. French and Sandra I. Jurado of Stanfield.
Lorrie Hatley, Stanly Arts Guild president, presented a check for $1,000 to Sophia, who will attend Stanly Community College and major in visual arts.
Sophia attended West Stanly High School and studied art under Randall Fike. She is carrying on a family tradition, as her mother and grandfather are artists, and she aspires to teach art after college.
The Stanly Arts Guild Scholarship, a second guild scholarship, is awarded to a graduating high school senior or college freshman from Stanly or a surrounding county with a declared major in art education or visual arts. 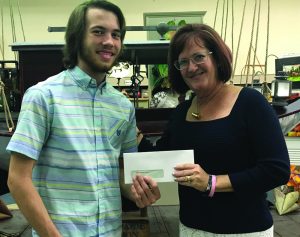 Brayden Meadors, son of Thomas and Ellen Meadors, and also a West Stanly High School graduate from Stanfield, was the winner of this $1,000 award.
Brayden is enrolled at Appalachian State University as a freshman, where his major area of concentration will be graphic arts. He studied graphic design and multimedia at West Stanly under John Thompson, who recommended Brayden with much enthusiasm.
Carole Poplin, scholarship chair, states that Brayden was an exemplary high school student with a weighted GPA of 4.3.
He is also musically talented and designed a school banner, football program and soccer uniform while at West Stanly.