Pfeiffer President Colleen Keith has announced the promotion of Danielle Lafferty to the position of athletic director. 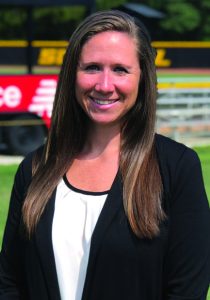 Lafferty had served as the assistant athletic director for compliance at Pfeiffer for more than two years under former VP for Athletics Bob Reasso.
“We are excited to announce that Danielle Lafferty will assume the role of athletic director at Pfeiffer,” said Keith. “Danielle has worked under Bob’s leadership for more than two years, and Bob has carefully prepared her for this role. We could not be in a better position for the successful continuation of our athletic program.”
“I am so humbled and honored to have the opportunity to lead Pfeiffer athletics,” Lafferty said.
“It feels great to know that the leadership here at Pfeiffer believes in my abilities and vision for the future success of the department,” she added. “I have been so fortunate to have had Bob Reasso as my mentor throughout my journey at Pfeiffer. I can’t thank him enough for helping elevate my career to where it is now. I feel beyond ready and excited for this next chapter. We have a great group of student-athletes, coaches and administrators that I feel confident will continue the tradition of our success as I step into this role.”
Lafferty worked her way through the ranks in her five years with the Falcons.
Initially, a graduate assistant softball coach, Lafferty spent two seasons in the dugout for the Falcons.
In 2014 she shifted to an administrative role as the assistant for compliance and game management. After completing her MBA in 2015, Lafferty was hired full-time as the assistant athletic director for compliance.
Later, she was named the senior women’s administrator and deputy title IX coordinator. Lafferty is also involved with several committees both on the athletics and academic side.
A Division I athlete, Lafferty was a four-year starter at shortstop for Elon University.
In her career, Lafferty played in 199 games and hit 15 home runs with 79 runs batted in. Lafferty was named SoCon Player of the Week on April 25, 2011, and won a Gold Glove in 2010. She still ranks fourth in program history with 326 career assists and she helped the Phoenix to a program record 38 wins and an appearance in the NCAA Regionals in 2010.
“Pfeiffer could not find a better person to be the athletic director than Danielle,” said Reasso who accepted a position at the American University in Cairo, Egypt.
“She played Division I athletics, worked on the Division II level and now has experience in Division III,” he said. “Danielle is a very driven and intelligent woman with great interpersonal skills. She has been involved every step of the way in our Division III transition and I know she will do an exceptional job for Pfeiffer and the Athletic Department.”